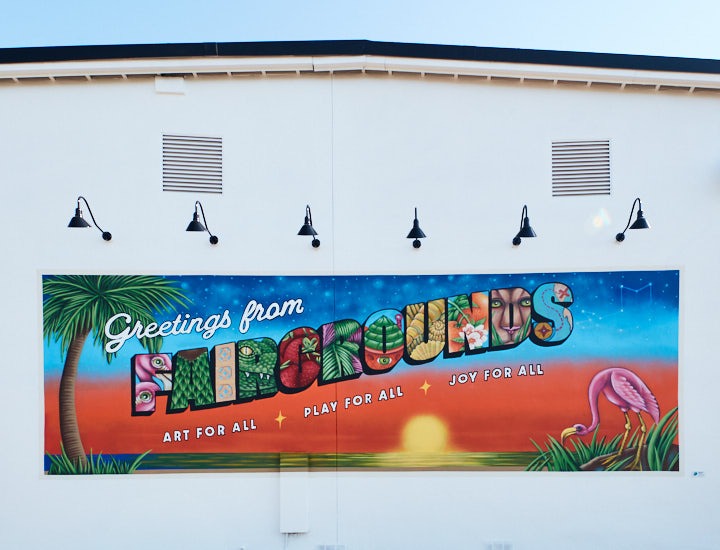 A peek inside Fairgrounds St. Pete: Expect the unexpected

Wander through an other-worldly motel and find yourself in a hall of mirrors and lamps. Follow the shimmer from a swimming pool made of reflected light. Peer through the portals of a structure that’s part spacecraft, part Futuro house, part Twistee Treat. And prepare to encounter a ravishingly beautiful Black mermaid.

Those are just a few of the surprises in store for visitors to Fairgrounds St. Pete, an immersive art experience opening soon in a 15,000-sq-ft. building on the outskirts of the Warehouse Arts District. It’s one of eight buildings that once belonged to Madico, Inc., a manufacturer of window film, and all are now part of The Factory, an arts and culture campus-in-progress in which Fairgrounds will be the anchor tenant.

It seems apt that Fairgrounds is located in a facility once devoted to products that block out sunlight and prying eyes, because the project is nothing if not mysterious. It’s been provoking questions ever since it was announced in 2019, and the experience itself is designed to stir curiosity.

Co-founders Liz Dimmitt, the artrepreneur who dreamed up the idea, and Mikhail Mansion, the tech whiz charged with bringing it to fruition, both have deep family ties to Tampa Bay. So do Kara and Jordan Behar, architects and longtime friends of Dimmitt who helped engineer the $4.5 million purchase of the 6.5-acre Madico property. Out of their collective brainstorming arose a loose narrative drawn from the lore and lure of Florida — its architecture, its kitsch, its mermaids and astronauts, ‘canes and gators — to be realized through technological invention and the works of 64 artists commissioned from Florida and around the world.

With a passel of professionals working behind the scenes in everything from lighting design to ticketing — many of them with experience in the arena-sized extravaganzas of Feld Entertainment — Fairgrounds promises to be a mix of cutting-edge art, interactive story-telling and just plain fun, an all-ages choose-your-own-adventure which could change each time you visit depending on what clues catch your eye.

One thing you can count on: visual and verbal puns. They’re hidden like Easter eggs throughout, say the creative team, extending even to the name Fairgrounds itself. A nod to the aura of discovery surrounding World’s Fairs and county fairs, it’s also a promise of fair dealing: Artists will get a cut of admission proceeds during the time their work is on display.

In the interest of keeping the surprises surprising — and in order to finish construction in time for a late May/early June start date — the folks who run Fairgrounds have been allowing only a limited number of visitors and releasing short YouTube previews. But duPont Registry Tampa Bay was fortunate enough to get two extended sneak peeks: first at the beginning of April, when construction was still in its raw early stages, and again a month later when several key elements were in place.

Much will remain concealed until opening. But in these tantalizing shots by Todd Bates you can get a glimpse of the magic in the making.

In coming weeks, look for in-depth interviews with members of the Fairgrounds creative team on dupontregistrytampabay.com.