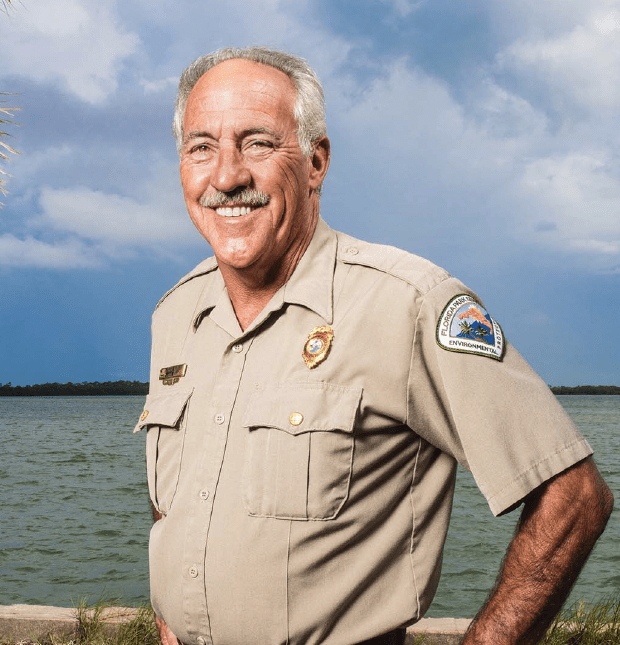 It’s axiomatic: Dunedin is delightful. Also delicious. Often dazzling. And any number of other D words that don’t quite capture its (here comes another one) distinctive appeal.

It’d be more apt, perhaps, to sum up Dunedin with “B” words (don’t worry, this alphabetical obsession won’t be hijacking future dR issues).

Bicycles, for one. When the Pinellas Trail was extended through the center of Dunedin in 1992, a whole new era began for Dunedin’s Main Street, leading to its present incarnation as a bustling, pedestrian- and bike-friendly district of shops and restaurants.

Beer, for another. Though the pioneering Dunedin Brewery opened way back in 1996, the town has seen the opening of six more microbreweries (and counting) in just the last decade.

There’s beauty, both natural and human-born, in the creative ferment at the Dunedin Fine Art Center. There’s business sense, exemplified by pre-Trail establishments like Sea Sea Rider’s that are still thriving decades later.

But first, if your visits to Dunedin have been confined to ice cream cones at Strachan’s or a romantic dinner at The Black Pearl, there’s another B word you might be surprised to discover: Beaches.

The man responsible for keeping the parks pristine and welcoming is Peter Krulder, manager of both Caladesi and Honeymoon Island State Park (the most visited state park in Florida) as well as Anclote Key and Egmont Key. He’s also the interim chair of the Greater Dunedin Chamber of Commerce, so he’s well-acquainted with the whole of Dunedin, both coastal and commercial.

No surprise: He loves the place. He moved here with his family from Queens, NYC in 1973 when he was 16. Apart from 20 years travel with the Army, he’s been in Dunedin ever since — and he likes the park so much he lives there.

It’s not all that solitary, he says. The assistant manager and another ranger reside in the park, too, and people are in and out of the area all day. But the evenings are nice and quiet.

It’s also highly unlikely that anyone else will ever be allowed to live on Honeymoon Island. The islands’ stretches of unspoiled beach — sans condos, motels, and snack bars — constitute a good part of their appeal.

But for a few years just prior to WWII, Pete tells me, a man named Clinton Washburn set up shacks on the beach and marketed them to newlyweds as honeymoon cottages (hence the island’s name).

“What a way to spend your honeymoon,” Pete muses. “On a tropical island living in a grass hut.” But, he adds, none of the couples who spent their two-week vacations there ever divorced.

As for Dunedin’s other attractions, Pete is effusive. “There’s so many events that go on,” he says, mentioning Wines the Blues and Mardi Gras — just a few of the seemingly almost-weekly festivals in the town. He loves the restaurants and the breweries, and then returning to the peacefulness of the beach.

A decade or so ago, Tampa Bay Times art critic Lennie Bennett called Dunedin Fine Art Center “the artistic equivalent of a village square,” a quote that’s been popping up in promo materials for the Center ever since.

Nowadays the village feels more like a small city. The facilities have grown from 2,000 to nearly 50,000 square feet since its founding in 1975, with outposts in downtown Dunedin in addition to the main campus on Michigan Boulevard. DFAC’s programs are as multifaceted as its students, who range in age from pre-K to senior citizen and study all kinds of art from ceramics to painting to cuisine.

The events calendar is equally diverse; on any given evening, you could attend a gallery opening, an art swap or a fashion extravaganza. Or you might want to stop by just for lunch; DFAC’s Palm Cafe is becoming a destination in its own right (get the crab cake!).

I’d been to DFAC for shows, but it wasn’t until recently, when VP/Communications Director Ken Hannon agreed to give me a tour, that I saw the full scope of the place. The two-story addition to the main building, completed in 2016 is home to classes in 21stcentury tech (a digital media lab) as well as age-old art practices (printmaking with copper plates or linoleum blocks). The addition also houses a faculty gallery, which gives students an idea of just how good their teachers are, and it’ll soon be the site of a state-of-the-art teaching kitchen.

Throughout the complex on this summer day there was the joyful buzz of kids’ creative energy, whether making clay whatsits, trooping through the lobby, or dancing up a storm with an interactive video in the David L. Mason Children’s Art Museum.

“There are 150 kids here as we speak,” said Ken. Children’s and teens’ classes in the Summer Art Academy are almost maxed out, but it’s worth checking for availability if only for the fun of exploring the camp’s weekly themes. (The Center was shocked this year, says Hannon, when the perennially popular Shark Week ran second in attendance to Fantabulous Foods!) 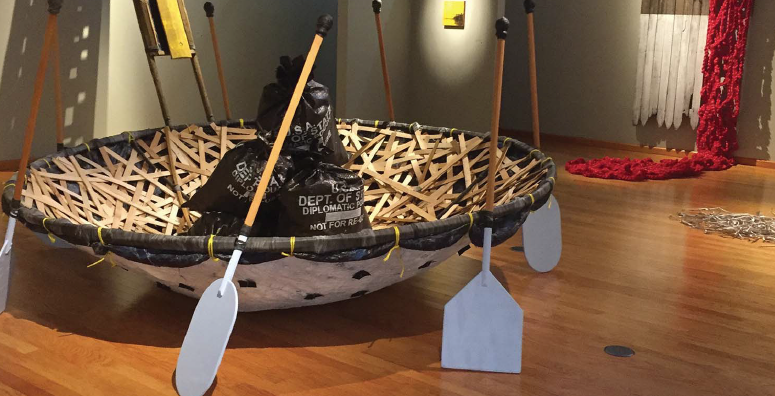 Another good reason to visit the Center soon: the deeply engrossing shows running through Aug. 12 in its four gallery spaces. Triangulate, co-curated by Nathan Beard, Kirk Ke Wang and Eivind Natvig, brings together large-format photographs by nine artists from China, Norway and the U.S. whose subject matter reverberates across international boundaries. In I + Thou, six artists explore themes of identity, highlighted by Mason Gehring’s searing self portraits. Souvenir is a sweetly arresting invitational show, in which multiple artists offer their interpretations of the word. Most memorable of all, the somber, startling assemblages by human rights artist Michael Massaro in his show Fait Accompli evoke the struggles of refugees through coils of thick red rope, boards lashed together and a mannequin torso split in half.

Worlds to discover, boundaries to cross, children to teach: It’s all inside DFAC, which feels uniquely reflective of the community where it resides. dfac.org

Back in 1990, when Sylvia and Artie Tzekas bought a two-year-old restaurant named after a vintage blues song in a tiny 1903 bungalow at the corner of Alt. 19 and Main Street, there wasn’t much else going on.

“That was the Tumbleweed Era,” says Tzsekas, 52. Waterfront staple Bon Appetit was open, Kelly’s was a year old and Casa Tina (now the vibrant heart of Main Street life) wouldn’t open for another year. So what led a young couple with two small children (one not yet a year old) to take over a restaurant in such a lonely spot?

“I guess ambition… and foresight,” says Sylvia. “Seeing the spot couldn’t stay like that, so close to the water [but] with an urban feel.” Sure enough, after the opening of the Pinellas Trail to Dunedin in 1992, that foresight paid off. Now, if you’re coming through Dunedin from Alt. 19 via car or the Clearwater Jolley Trolley, you can’t miss Sea Sea Rider’s, doubled in size since the early days and recently renovated. With ferry service between Clearwater and Dunedin having begun July 6 (and docking literally across the street from Sea Sea Rider’s in the Dunedin Marina), their visibility will only increase.

So what keeps a restaurant going for 30 years? “Just a lot of hard work, a lot of dedication.”

And one more key word: “Hospitality,” she adds. “You have to know what the word means. You have to be passionate about it.” (As someone who’s enjoyed dining at Sea Sea Rider’s more than once, I vouch that the staff does indeed know the meaning of the word.)

She’s excited about the way Dunedin and the restaurant’s clientele have evolved over the years. “It’s awesome. The demographics have changed, more vibrant, more young. A lot more of the arts are involved. Between the trail, the golf course, we’re in the middle of it all.”

So what’s in store for the next 30 years? “We’re renovating an old carriage house around the corner for a banquets and events space. I’m in the process of waiting for my permits as we speak.”

And it wouldn’t be a milestone birthday without a party. “In September we’ll have a 30th anniversary celebration, with bands all day — a parking lot party. We’re the only ones that have our own parking lot around here.”

As for the future of her town? “Dunedin hasn’t reached its peak yet,” she observes. “It’s moving in a slow but good pace, where it’s consistently changing for the better.”

Dunedin Gives Back at Blur

Speaking of parties, another longtime Dunedin business, Blur, is throwing a significant bash in the near future. Still under the ownership of Kathy Carlson and Virgel Kelly (they sold the neighboring Kelly’s and Chic-A-Boom Room last year), Blur has been a favorite clublife destination since it opened 11 years ago. The club is giving back with its 4th Annual Charity Bartender Auction Sunday, August 26th at 7 p.m. So far this year, 41 bartenders from all over Pinellas have agreed to take part, raising money via everything from dunk tanks to GoFundMe campaigns to support the Clearwater-based Homeless Empowerment Program. On the night of the event, the competitors will bring their total funds raised to Blur and the winning bartender will be revealed. “This event has raised a combined $85,000 over the last three years,” says HEP Marketing Manager Rebecca Adams, “due to tireless fundraising efforts of all the participating Tampa Bay bartenders and the wonderful donations received for raffles and silent auctions!” hepempowers.org/get-involved/events