For anyone who loves books, hanging with other people who love books, or listening to writers talk about their books, the Festival of Reading is word-hog heaven. From 10 a.m. to 4 p.m. on Saturday, venues in and around the  USF St. Pete campus will host readings by so many authors it’ll be hard to pick; just at the Student Center Ballroom alone, you could meet the writer your kids love to be scared by, R. L. Stine; hear humorist Dave Barry talk about his old dog Lucy and MacArthur genius Edwige Danticat read from her new short story collection; and thrill to the yarns of three great suspense writers, Michael Koryta, Lori Roy and Lisa Unger. You’ve got 50 writers to choose from in all, including a slew of locals, from Ray Arsenault to Paul Wilborn to Kristen Hare, author of 100 Things to Do in Tampa Bay Before You Die. Don’t know if this festival made her list — but it should be on yours. Free admission. Sat. 10 a.m.-4 p.m., USF St. Petersburg & environs, tampabay.com

Back when Creative Clay was on Central, their Folkfest St. Pete was a highlight of the EDGE District calendar. Since moving over to 1st Ave. S., they’ve been staging the festival (now called Creative Clay Fest) across the street from their arts center’s new location, where you’ll still find a great lineup of local music, folk art from all over the Southeast, food and drink and general good vibes, all in support of Creative Clay’s programs for artists with disabilities. Sat. 11 a.m.-8 p.m., 1846 1st Ave. S., St. Petersburg, creativeclay.org.

First Elton, now Elvis! It’s raining music legends up in here, and with Elvis Costello having survived a cancer scare recently it’s even more reason to get to the Mahaffey on Sunday and hear him and the Imposters rock through one of the most eclectic songbooks this side of, well, Elton, from “Watching the Detectives” to “Every Day I Write The Book” to “Alison” to “Almost Blue” to… well, it goes on. Let’s hope he does, too. Sun. 7 p.m., Duke Energy Center for the Arts at the Mahaffey Theater, St. Petersburg, themahaffey.com. 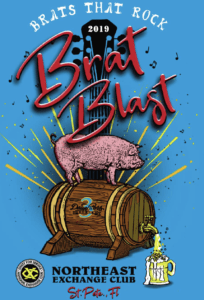 One of my first and best memories of Tampa Bay after moving here from parts north in 2004 was my first Ribfest. Good music, tasty ribs… and it was 70-something in the middle of November! Aaahh…. Well, Ribfest is no more, alas, but in its place the Northeast Exchange Club is throwing a Brat Blast, which has a similarly two-syllabic ring to it and a similar emphasis on delicious meat products, just on a smaller scale and in a different location, the always festive 3 Daughters Brewing in St. Pete. Best part: $8 gets you a brat, chips and a 3 Daughters beer, and net proceeds help Habitat for Humanity repair a local veteran’s home. Live music, too, and a car show. Sun. 12- 6 p.m., 3 Daughters Brewing, 222 22nd St. S., St. Petersburg, 3dbrewing.com.

6) Shakespeare in the City: The Taming of the Shrew. 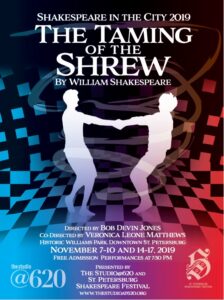 New York City may have Shakespeare in the Park, but St. Pete has Shakespeare in the City — and it’s free! Thanks to The Studio@620’s Bob Devin Jones and St. Petersburg Shakespeare Festival’s Veronica Matthews, Williams Park’s outdoor stage has become the setting for free performances of the Bard on a regular basis, often with a creative fillip or two — as in the all-male cast in their production of Shakespeare’s problematic comedy Taming of the Shrew opening Thursday. Not sure if that choice will upend the play’s innate misogyny — Shakespeare’s casts were all-male, after all — but it ought to be fun to see who comes out on top when Petruchio and Kate’s battle of the sexes involves only one sex. Thurs.-Sun. 11/7-10 and 11/14-17, 7:30 p.m., Williams Park, St. Petersburg, thestudioat620.org.

In April 1939, the Daughters of the American Revolution forbade superstar African-American contralto Marian Anderson from singing in Washington D.C.’s Constitution Hall, which they owned and operated, for one reason — her race.  First Lady Eleanor Roosevelt quit the DAR in protest and Secretary of the Interior Harold Ickes offered the singer a much bigger stage: the steps of the Lincoln Memorial, where she drew a crowd of 75,000. In commemoration of that historic moment, the Dr. Carter G. Woodson African American Museum is hosting a concert at the Palladium featuring some our area’s most accomplished black performers, including violinist Mary Corbett, bass vocalist Gregory Sheppard, bassist John Lamb, baritone Jamal Sarikoki and soloists Siobhan Monique, Carolyn Hobbs, Fred Johnson and Maiya Stevenson. The event will begin with a prelude on the Palladium steps. Sun. 4:30 p.m., The Palladium, 253 5th Ave. N., St. Petersburg, mypalladium.org.

Here’s a chance to meet an extraordinary woman. A  Zephyrhills native who played rugby and flag football at FSU, Andra Douglas went on to careers in the publishing and entertainment industries and in 2000 acquired the NY Sharks, which after 19 years of play retired as the winningest and longest-operating women’s tackle football team in the world. Douglas has written a book about her experiences, Black & Blue, and creates mixed-media artwork “defined by the courageous spirit of the 100+ women’s tackle football teams throughout the world.” On Friday the Warehouse Arts District Association will host Douglas for a book talk and interview with WADA Executive Director Diane Bailey Morton, and on Saturday an exhibition of her artwork opens at WADA’s ArtsXchange Gallery. An Evening with Andra Douglas, Fri. 6-8 p.m.; Black & Blue opening, Sat. 5-9, Warehouse ArtsXchange, 515 22nd St. S., St. Petersburg, warehouseartsdistrictstpete.com.

The name of MIZE Gallery’s new exhibition may sound like wishful thinking, given our autumnal hot spell, but the concept is very cool: Each of the more than 60 participating artists has created a new work on a provided wood cutout of a sweater. 689 Dr. MLK Jr. St., St. Petersburg, opening Fri. 6-10 p.m., facebook.com/mizegallery.

Hop on the bus, Gus (or the trolley, Molly) — it’s time for a Second Saturday Art Walk (and ride) in St. Pete. Be sure to make one of your stops the always worthwhile Duncan McClellan Gallery, where an Art Glass Weekend gets underway on Saturday with work by visiting artists from Seattle and Illinois and continues on Sunday with artists’ talks and glass-blowing demos. Sat. 5-9 p.m.; Sun. 11 a.m.-3 p.m., 2342 Emerson Ave. S., St. Petersburg. dmglass.com.