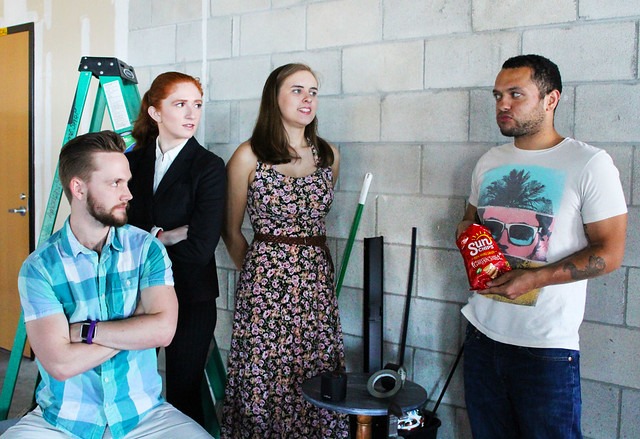 dR Daily 7/31: The Gap and the Glue at American Stage

No, it’s not a lecture on set-design mishaps. The Gap and the Glue is the title of an original work written, directed, devised and performed by the young artists in American Stage’s apprentice program. It premieres tonight at 8:45 p.m. in a free performance right after the theater’s acclaimed mainstage attraction, Fun Home.

The premise of The Gap and the Glue is intriguing: Four actors (played by Rose Hahn, Dylan Renfrow, Donovan Whitney and Kaylie Horowitz) face the challenges of censorship when the government issues a mandatory ban on theatrical performance. In the 40 minutes before the house opens for a Shakespearean festival, they scramble to make the show go on despite the fact that crucial elements are disappearing.

Following tonight’s premiere, the play will be presented after select performances of Fun Home through Aug. 16 at 8:45 p.m. on Wednesdays and Thursdays and 9:45 p.m. on Fridays, and will be free and open to the public. See the theater’s website, americanstage.org, for details.

The Gap and the Glue exemplifies American Stage’s commendable AS Forward (AS FWD) initiative, aimed at engaging the next generation of actors and audiences in live theater.

The Wine Shoppe: An unexpected find in Carrollwood