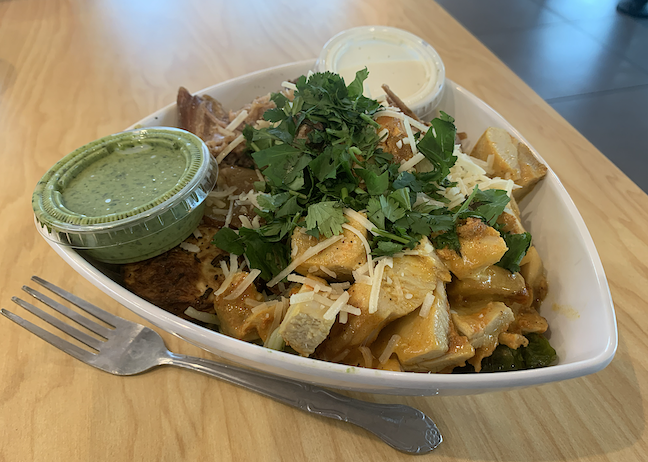 Bowls have a branding problem. It begins and ends with the generic name. Bowls can relate to pottery, strikes and spares, football, weed, haircuts. And food, of course. That’s why we’re here. Sorry to say that I don’t have a solution for the bowl branding dilemma. I tried. Came up with nothing. It wasn’t easy to tweeze out two contestants. So many restaurants of so many types have bowls on the menu — and quite a few specialize in them. After some poking around, I chose two bowl-centric eateries with strong reputations: Pacific Counter, on the drastically revamped 600 block of Central Avenue in St. Pete, and Bolay Kitchen, a mile-and-a-half north on 4th Street. Bolay, a fast-growing chain with 25 locations in Florida, calls its bowls “bols,” which, come to think of it, isn’t a bad rebranding idea. But I doubt it’ll catch on. Rather than stick to FFF’s customary apples-to-apples format, we decided to build our own bowls choosing items that enticed us.

We arrived just after 5 on Tuesday. The long room with white walls was so brightly lit that it made a high school lunch room look like an after-hours dance club. Better to see what we were ordering, I guess. Hip Afro-pop played over the sound system at a comfortable volume. Nice. Bonnie and I split a Large bowl ($14.99). Ordering involved walking along a cafeteria line to select two bases, two proteins, five add-ons and other accoutrements — from more than 50 options. Franki, our uber-helpful counter person, gave us more than a dozen samples on toothpicks and plastic mini-spoons. We chose white sushi rice and clear noodles; spicy tuna and Hawaiian barbecue chicken; edamame, corn, Hawaiian salsa, shredded carrots and jalapeños. Franki sprinkled on a few taste enhancers. We opted for Poke Classic sauce.

About as basic as it gets. The paper bowl was crammed full, the sauce in plastic containers. The eating tools were wood (chopsticks) or plastic (forks). I started with the former and quickly switched to the latter. The presentation conveyed a message: simple, fresh, healthy.

There were so many textures and tastes in this bowl that I initially worried they would all combine for a kind of mush. Such was definitely not the case. The tuna — raw cubes, moderately spicy-hot — was the star attraction. The chicken was fine, but the next time I’m doubling up on the tuna. The rest of the cast was exemplary. Each bite offered an adventure. Rice, tuna, edamame, corn — yum. Noodles, chicken, jalapeños — yes. Bold, subtle, savory, sweet, tart, smooth, crunchy and more, with an agreeable after-burn. The combinations were endless, and I found myself putting together strategic bites rather than random scoops. This not only provided a panoply of flavors, but added some fun. I found that the syrupy, tangy sauce muscled out the other flavors, so quickly slid it to the sidelines. The experience was like eating a long series of micro-meals. Bonnie tapped out kind of early, but I kept going and discovered that, yes, this bowl had a bottom.

At around 2 p.m. on Thursday ahead of a cold front, I arrived — solo, this time — under gray skies. I was the only dine-in customer. Like Pacific Counter, Bolay serves its bols cafeteria style. I ordered a Large ($12.49) and my server, a gracious young woman named Lily, helped me build it. Bolay does not have the same head-spinning number of options as Pacific Counter, so the process moved along more quickly. It became instantly apparent that this bol would be markedly different than the one from a couple of nights earlier. (For starters: no tuna.) Deciding to go all in on contrast, I chose as my bases black rice (yes, it was black) and pesto noodles. Then came Cuban-style mojo pork and lemon chicken, topped with roasted potatoes and Brussels sprouts. Lily sprinkled on some shredded parmesan and a bit of cilantro. For sauces, I went with herb pesto and creamy garlic.

A big plus for Bolay. The attractive concoction came in a sleek porcelain bowl, giving the ingredients a little room to breathe and the presentation a modicum of class. Metal forks were available for those eating in.

Pretty much everything in this bol was bigger than the competition’s. I had to fork-cut the potatoes and chicken, roll the noodles spaghetti-style, break off chunks of pork. It made the meal heavier, which is not a complaint. Just another example of two contrasting bowls. The mojo pork was the main attraction here. It rivaled the versions I’ve had in Cuban restaurants — juicy, tender, tangy. The chicken, while not all that lemony, was moist and flavorful. The nicest surprise was the black rice, which had a rustic, nutty flavor and added some rough textural edges. The sauces, especially the creamy garlic, provided a nice complement. It was a lot of food. I assumed this bol had a bottom, but I didn’t come close to reaching it.

And the Winner of the Friday Food Fight Bowling Bout Is …

Before I announce (please keep your eyes up here), let me say that veering from this column’s apples-to-apples concept makes calling a winner more difficult. I guess I didn’t want to eat a similar bowl twice in three days. If that’s a dereliction of duty, however slight, I’ll own it. I’ll even add an asterisk. Okay, the winner:

I enjoyed both meals, but found Pacific Counter’s offerings more in line with the healthy-eating concept I expected from my bowling experience. That was due in part to the compone