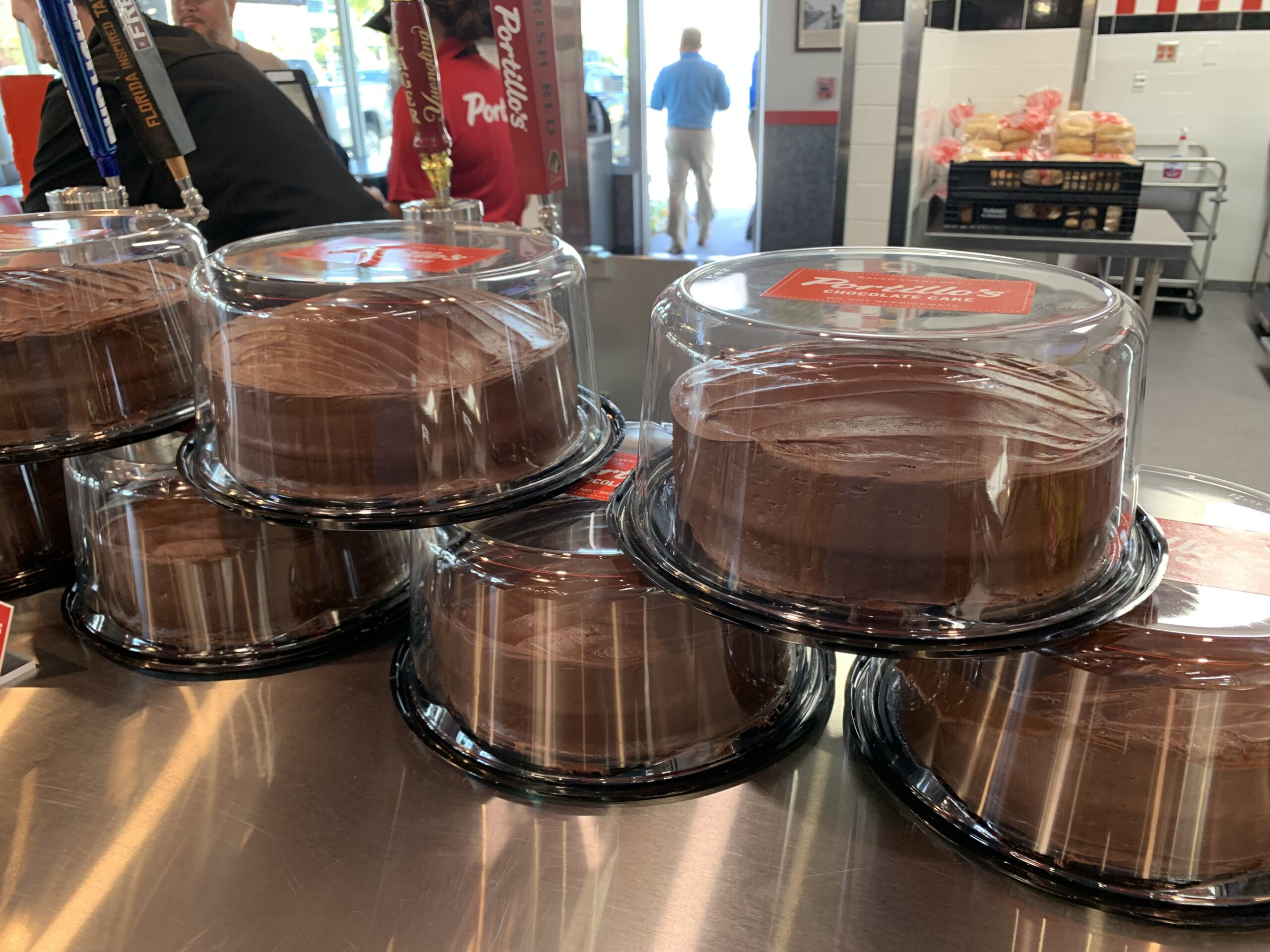 “Where’s the chocolate cake?” That’s a common post-dinner question around our house. Since there’s rarely any chocolate cake to be had, the question is usually rhetorical, and not a little poignant. But that’s the great thing about Friday Food Fight. We get to throw dietary precautions out the window and eat things we shouldn’t! So, as the OG Friday Food Fighter, rejoining the Fight while the intrepid and tasteful Eric Snider is on vacation, I decided that the subject of my first returnee column should be: Chocolate cake! However you slice it, this week’s two contenders are famed purveyors of the product. Who will take the cake? Who will get iced? Read on.

In a previous FFF involving the St. Pete outpost of Portillo’s, the Chicago chain lost a hot dog/Italian beef taste-off to Tampa institution Mel’s Hot Dogs. The battle was very close, which was to be expected considering that Portillo’s has been established for more than 60 years as the home of the Chicago-style dog. But Portillo’s is also known for something else, according to the menu: its “world-famous” chocolate cake. It’s not just Portillo’s that says so. The interwebs are awash in praise for the cake from foodie bloggers, from TV anchors, even from home chefs attempting to copycat the recipe. The cake is so popular that Portillo’s also serves it up in a milkshake, which made TV personality Sherri Shepherd scream for joy on the Food Network’s Guilty Pleasures. Commentators frequently cheer for how moist Portillo’s cake is. The reason? Its not-so-secret-anymore ingredient: mayonnaise. Texture: That dollop of mayonnaise does the trick. Portillo’s cake is indeed very moist, with a pleasantly velvety crumb. Icing: A smooth and rich frosting that melds with the cake, as opposed to falling off in a slab. Flavor: Chocolatey and not too sweet — though not perhaps as intensely chocolatey as one might like. Price:  $3.59 for a generously sized slice. Presentation: It’s served along with the meal, when you pick up your order from the counter. Overall: Portillo’s chocolate cake was the perfect followup to my Maxwell Street Polish hot dog, which had just the right snap and a delicious almost-burnt taste. My take-out cake slice also fared quite nicely, still moist and rich even after a day or two in the refrigerator. And ohhhh, that first bite followed by a sip of ice-cold milk — nothing better.

Portillo’s cake may have a national rep, but Wright’s version is a local legend. When I asked for recommendations as to who makes the best chocolate cake in Tampa Bay, Wright’s Gourmet House, a longtime South Tampa favorite, was the answer that came up the most. And, like Portillo’s, Wright’s cake has fans all over the web, with this Trip Advisor reviewer pretty much summing up the overall opinion: “The best chocolate cake on earth!” We last wrote about Wright’s when we taste-tested its club sandwich against The Library’s in St. Pete. Wright’s came out on top, bearing out the restaurant’s vaunted reputation as a top lunch spot and living up to the founders’ vow: “We’re only as good as our last sandwich.” Consistency may be Wright’s secret ingredient. And that applies to their cakes, too, which are just as popular as their sandwiches (if not more so), with row after row of boxed cakes and refrigerated slices on view as customers wait in line to place their lunch orders at the counter. Ordering a cake from Wright’s for a special occasion is a Tampa Bay tradition, especially during the holidays. Texture: Smooth as silk, and every bit as moist as Portillo’s. (I have no idea whether mayo was involved.) Icing: A lighter milk chocolate flavor for the frosting, which contrasted nicely with the dark chocolate cake. I wasn’t a fan of the chocolate chips at the top of the slice, though — an unnecessary add-on when the cake is otherwise so good (see “Flavor”). Flavor: Love at first bite. My tasting partner, Larry, and I almost simultaneously sighed and said  “Wow!” “It tastes more homemade than Portillo’s,” said Larry, “the way mama used to make it.” There was a depth and complexity to the flavor, with warm notes of coffee and cocoa. Price: $7 a slice. But the slices are huge, almost too big for the plates they’re served on, and definitely big enough for two to share. Presentation: The plastic-wrapped slices on refrigerated shelves don’t look all that appealing, and you have to remember to pick one up and take it to the counter when you place your lunch order. Overall: It all comes down to the flavor. We couldn’t wait to try it, so we took a few bites before devouring Wright’s deservedly beloved Beef Martini sandwich (with sauteed mushrooms!) and their brilliant BLT. That’s when we voiced our first “Ahhhhs.” And later, finishing the slice at home, we found out that there was only one thing better than chocolate cake with milk — chocolate cake with eggnog!

And the chocolate cake that takes the cake is…

That’s two FFF wins for Wright’s. After almost 60 years in business, they clearly know how to do things right. Though Portillo’s cake deserves its renown, it can’t beat a glorious slice of Wright’s. And since we bought two slices and could only eat one, we will have an answer the next time one of us asks that inevitable question. “Where’s the chocolate cake?” “In the freezer!”