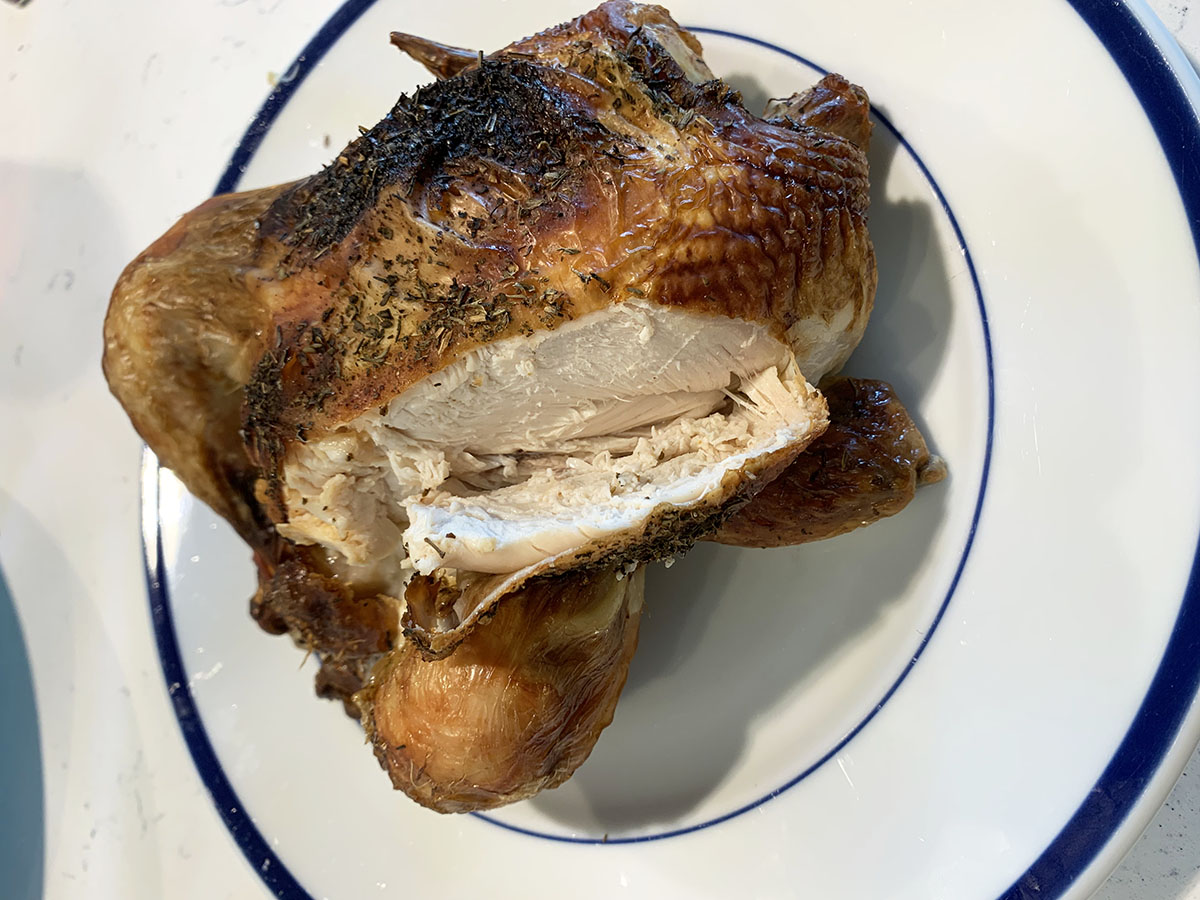 It may be the best lunch or dinner deal around: Fresh Market’s Thursdays-only $5 rotisserie chicken.

But what of Publix? I am an avowed fan of their fried chicken; give it to me with some mac ‘n cheese and greens and I’m in heaven.  But their deli also has a tasty-looking array of rotisserie chickens.

How would the Publix rotisserie roasters measure up (at $7.39, sometimes $6.39 on sale) to Fresh Market’s 5-buck bargain chickies?

Here’s how the tasting turned out.

Appearance: It varies from chicken to chicken, of course, but the one we purchased had been roasted beyond golden, giving its skin a darker-than-ideal char.

Aroma: Immediately seductive. Pop the top on the plastic container and it’s impossible not to want a slice.

Taste & Texture: Despite the appearance, it’s juicy and succulent, perfectly cooked all the way through. The herb and wine flavorings suffuse the entire bird, the white meat is notably moist, and the wing meat practically falls off the bones. Only that pesky red rubber-band thingy that wends in and around the wings holds us back from devouring the whole thing all at once.

Value: Even if you carve it up for lunch or dinner as soon as it hits the counter, you can still have lots left over for  — yum — chicken sandwiches. A meal and a half or even two for five bucks? Can’t beat it.

After-Bird: But an hour later… why do I feel weird? Rumbly stomach and not from hunger. Slightly sleepy – turns out chicken has tryptophan, too, just like turkey. Or maybe it was something in the ingredients (see photo above).

Appearance: The rotisserie chickens at Publix are packed in bags with a little plastic window so you can get an advance peek at your purchase. The pickin’s were slim when we shopped – just two chicks available – so I went with the more golden of the two, one in which the skin had partially slipped off, which somehow seemed like a good sign.

Taste & Texture: The thigh and wing meat is fall-off-the-bone moist, but as any cook knows it’s the breast that poses the toughest test. The white meat on this roast verged on dry, and the lemon pepper flavor was only faintly present. A perfectly OK roast chicken — but just OK.

Value: It’s a meal and a half for under seven (or six) and change, which is nothing to sneeze at. But it’s not quite as great a deal as Fresh Market’s.

After-Bird: Sure enough, we both fell into mid-afternoon naps after our Publix poultry sampling. Tryptophan strikes again. Just for comparison’s sake, I took a pic of the Public chicken ingredients, too.

Which roaster rose to the top of the pecking order?

Truth be told, my husband makes the best roast chicken I’ve ever had (you can ask anyone who’s tasted it). But when he wants a quick substitute, he stops and shops on Thursdays at Fresh Market, and I can’t argue. The chickens in their rotisserie rotation are reliably delicious at any price (though the “white wine powder” and “sulfer dioxide” do give me pause).