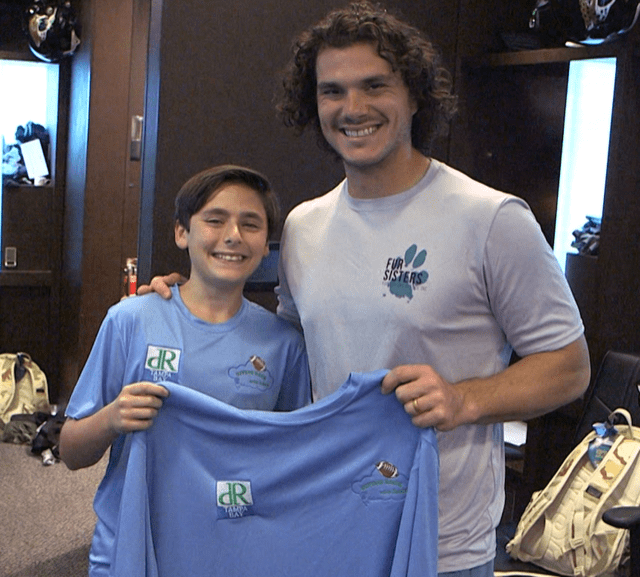 Giving Back with Zack: The kid reporter meets the Jacksonville Jaguars

On one recent Friday morning, my son Zack and I set off on an adventure to Jacksonville, an adventure that arose out of my love of football — and a program called Giving Back with Zack.

I have long wanted to bring attention to players who were using their platform for good, especially in light of the controversies that have plagued the National Football League in recent years. The Walter Payton Man of the Year Program singles out one NFL athlete from each of the 32 teams, but what about all the other players? Last year, 800 athletes signed up for the NFL’s My Cause, My Cleats initiative, in which players wear cleats decorated to showcase their favorite charities, so there’s clearly a desire for them to get the word out and give back. Who better to interview NFL players about their favorite causes than a 12-year-old kid?

I learned about my son’s knack for talking to professional athletes following the death five years ago of my husband, Jeff. He worked field and locker room security at MetLife Stadium in NJ for over 14 years and later was head of field security for RedBull Stadium, meeting many players and celebrities along the way. When he got sick, many of these people reached out to help us, and after his passing they invited Zack and me to games and other special events.

As a result, Zack has gained the kind of access any fan would envy. He’s sat on the sidelines of Dolphins, Giants and Buccaneers games. He has met Dan Marino, talked to Joe Namath, had conversations with John Mara (owner of the Giants), hung out with Pam Oliver on the sidelines, sat in the Giants suite with Jerry Reese (previous GM of the Giants) and mingled with Dolphins and Giants players in Miami for Monday Night Football.

A big sports fan (particularly football and basketball) and an ardent ESPN/SportsCenter viewer, he’s able to converse easily with these insiders, and they’re happy to tell the world (via Zack’s YouTube channel) about what matters to them most.

Last year  Zack interviewed Vincent Jackson about his charity Jackson in Action shortly after he retired from the Buccaneers. Then, during Bucs training camp, Zack was able to interview Mike Evans about his charity, and Gerald McCoy about his up-and-coming foundation. In December we were able to partner with Nationwide Insurance to go to the Pro Bowl and interview Walter Payton Man of the Year Nominees Von Miller and Chris Harris Jr.

Now, by partnering with duPont Registry Tampa Bay, we plan on highlighting more players across the National Football League and branch into other sports to talk to athletes with charities and causes that they are supporting off the field.

Arriving at the TIAA Bank Field in Jacksonville, we were escorted to the Media Room to await the Jaguars players who were coming in from practice. While we were waiting, John Shipley of Sports Illustrated came over and introduced himself before heading off to get his story. A few minutes later, as we entered the Jaguars locker room, loud music blasted, laughter filled the air and large athletes draped in towels goofed around as they cleaned up and headed out for the day.

Josh Lambo, Lerentee McCray, Cody Davis and AJ Cann were all gracious and generous with their time as Zack asked a question most of the media don’t ask: What is important to them?

These are players that we didn’t know much about before heading over to Jacksonville. They aren’t the star athletes who all the broadcasters talk about on ESPN and SportsCenter; they’re simply dedicated to doing their best on the field, they’re team players focused on helping the Jaguars to win, and they’re all trying to make a difference in their communities.

Josh Lambo, we discovered, used to be a professional soccer athlete at 15 before switching to football in college and is now one of the best kickers in the league. Excelling at his position is priceless, but he is also passionate about helping homeless animals, along with several other charities that he supports.

Lerentee McCray started his football career when he was part of the 2008 Florida Gators team that won a national championship, and he was part of the Denver Broncos team, with Peyton Manning, that went on to win a Super Bowl. Bringing that talent to the Jacksonville Jaguars, Lerentee is dedicated to making a difference for his team, and off the field he created a foundation to help underserved youth called Big Play McCray.

Cody Davis is a safety and joined the Jaguars as an unrestricted free agent in 2018; he is a key special teams player this year as well as the special teams captain. Five years ago, he started giving back by putting on a football camp back in Stephenville, Texas, where all the proceeds have gone to an education foundation. He is also a big supporter of the Fellowship of Christian Athletes, which he’ll be highlighting this year with My Cause, My Cleats.

After the interviews we headed over to Aloft, a hip boutique hotel located in Tapestry Park just seven miles from the stadium. A vision of the W Hotel Group, it reminded me of a small New York City hotel.

Sales Director James Angel greeted us with smiles, Southern hospitality and a welcome bag filled with savory and salty treats and two bottles of Vitamin Water, compliments of the hotel’s ReFuel food and beverage area in the lobby. A huge football fan himself, Angel loved the concept of Zack interviewing athletes about their charities and wanted to support our efforts.

A few miles away from Aloft is the shopping and dining mecca of St. Johns Town Center. We ventured there later in the afternoon so Zack could explore Louis Vuitton, Vineyard Vines, the Apple store and Dick’s Sporting Goods, and then strolled down to The Cheesecake Factory, which was abuzz with activity and overflowing with people on a Friday night. After a yummy dinner of blackened fish tacos and tuna poke, we were ready to call it a day.

Saturday was filled with breakfast at the hotel, shopping at PGA Superstore, visiting with family in Ponte Vedre, and watching the Georgia Bulldogs lose to the South Carolina Gamecocks in double overtime. When we returned to our hotel to change and relax before dinner, the wide open lobby space at Aloft was hopping. Guests were playing pool in the game room, watching sports on the multiple TVs in the wxyz bar area, chatting in groups spread out over several seating areas, and purchasing snacks from ReFuel.

On Sunday, as we took the 15-minute drive to TIAA Bank field, a bus passed us with a police escort — that was the bus carrying the Saints players. At the stadium, Zack was happy to get his picture taken with several of the Jaguars cheerleaders and snag a Jaguars towel to take up to the press box.

The press box is a long rectangular area with glass windows all along one side, providing a perfect view of everything going on in the stadium — including Pet Paradise, the only pet park in an NFL stadium. Josh Lambo was a big advocate for getting that built.

During the game the press box was relatively quiet as writers compiled their stories. Zack quietly cheered on Gardner Minshew, a phenom rookie quarterback for the Jaguars who’s been having a strong season so far. (They were handing out Minshew Mustaches to all the fans as they came into the game.) We watched Cody Davis go out with an injury but saw him later walking around on the sidelines. We were happy to see Josh Lambo nail both of his field goals to secure the team’s only 6 points of the game and score Points for Pets! Unfortunately, the Jags couldn’t hold back the Saints, who scored a touchdown in the last quarter to win 13- 6.

It was a fun weekend kicking off the new season of Giving Back with Zack, and we look forward to upcoming interviews already scheduled with other NFL players.

Check out Zack’s interviews on his YouTube channel to see him in action and learn more about the players and their charities.

Weekend Wheels: The new Mercedes-Benz G-Class is so square it's hip