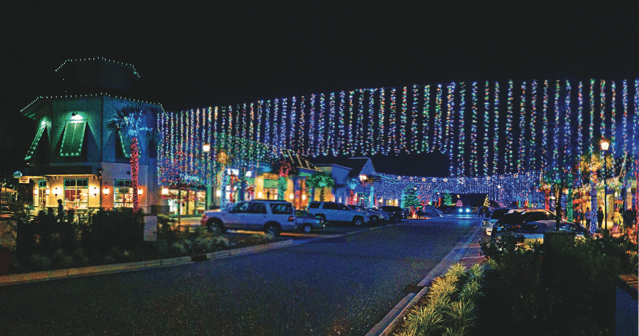 Driving down the quiet, tree-lined streets of Hilton Head, the breeze, with just a touch of coolness, wafting in through the front-to-back Skyscape sunroof of the new 2018 GMC Terrain my sister and I were trying out on a recent visit, I began thinking about what an idyllic place the island would be to celebrate the upcoming holidays. We could hop in the compact SUV at home in Tampa Bay and in just about six hours arrive in Hilton Head, recently named the Top Island in the United States by Condé Nast Traveler’s 2017 Readers’ Choice Awards, and #1 Island in the Continental U.S. and #2 Island in the World in Travel + Leisure’s 2017 World’s Best Awards.

As we continued touring the island and I realized all there is to do that appeals to all ages, I thought more about celebrating the holidays on Hilton Head. I started thinking about logistics and how my husband and I would get everything from our home to South Carolina. It was then that I realized the Terrain’s interior is deceptively spacious: its split flat-folding rear seats could provide more than enough room for our luggage and the holiday gifts we’ve thoughtfully selected which could be deliver to our family in-person. What’s more, our pup could still ride in style on her side of the backseat that would remain upright, and we could ride in style with our tunes and podcasts playing through the Terrain’s GMC Infotainment System that supports Apple CarPlay. Win, win, win!

Stopping at a light and looking over at another driver who gave a small wave, I realized that aside from all of the natural and sporting fun that can be found on Hilton Head, one of the island’s main attractions is its inherent sense of community, or southern hospitality, that welcomes locals and visitors alike.

That feeling is sure to be prominent even more during the holiday season when Hilton Head rolls out the welcome mat – or maybe, more appropriately, the beach mat – and invites one and all to join in its holiday celebrations.

On December 1st, the Winter Wonderland Festival will host cardinal games, a children’s parade and a golden candy cane hunt, more fun, and the following day floats, bands, walkers, cars and, of course, Santa, will take over the streets downtown Bluffton during the Bluffton Christmas Parade. Through December 30, nights are filled with holiday activities and entertainment during ’tis the season at Shelter Cove Town Centre, including train rides, movies in the park and visits from Santa and Mrs. Claus. Or, simply lace up your walking shoes or hop on a bicycle and tour the holiday lights that sparkle across the island.

New Year’s Eve will be celebrated family-friendly style with a ball drop from the top of the iconic candy-striped Harbour Town Lighthouse. It probably comes as no surprise that the ball that drops is in fact a one-of-a-kind 9-foot inflatable golf ball, in tribute to the 24-plus golf courses found throughout the island.

The fun doesn’t end in Hilton Head once the holiday season ends, however. On January 27th, Hilton Head Snow Day is a fun-filled family event with inflatable rides, a snowfield, entertainment and, yes, snow! This is especially fun for kids who live in the southeast and have never seen snow. In February, the Hilton Head Island Seafood Festival will be held the 19th through the 25th, showcasing talented chefs, local seafood, live music and more.

While Hilton Head is a fantastic destination year-round, there’s just something about the island during the holidays. Plan a visit and find out for yourself!

By: Susan B. Barnes

4 Yoga Techniques For A New You