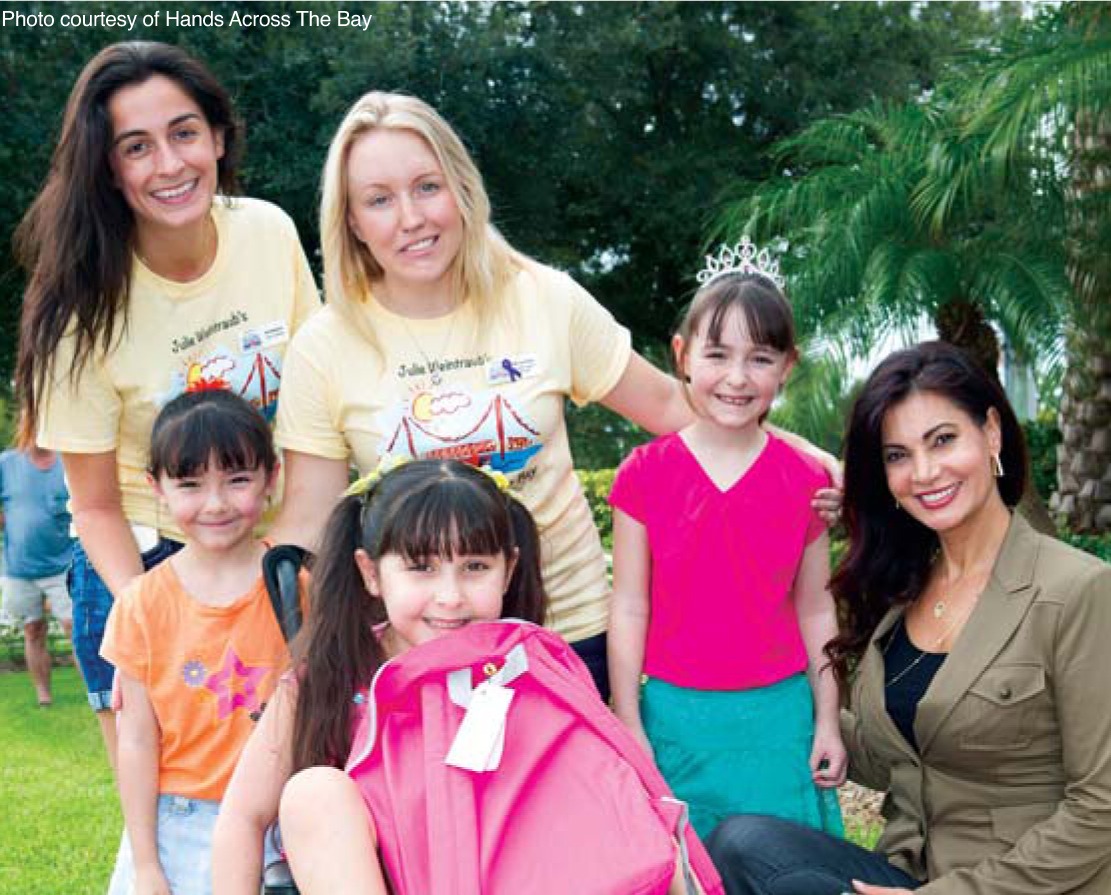 Linking Hands Across The Bay

They’re one of Tampa Bay’s most recognizable and charismatic couples, often spotted in television commercials touting sparkling jewels. Julie and Steve Weintraub may have made selling diamonds a family affair, but philanthropy is at the heart of this dynamic duo.

Together as owners – and the faces – behind the Gold & Diamond Source, Steve manages the day-to-day operations while Julie serves as Vice President, both working alongside their three sons and Steve’s sister in the showroom. If running the nation’s fastest growing jewelry store in the country and launching a new jewelry line on HSN this December wasn’t hectic enough, the couple also raises five children, ranging in age from 16 to 31.

The Weintraubs, married since 2004, are united in business and creating a legacy of giving back to the community. In 2010, Julie founded Hands Across the Bay (HATB), a local non-profit with a mission of identifying and preventing equality and social issues, including bullying, suicide, teen dating violence, and animal abuse throughout Pinellas, Hillsborough, Pasco, and Manatee counties.

“We are giving a hand up to people. If someone is in need of help through no fault of their own, trying to do their best in a bad situation, we can help them in various ways. Often, more than they originally requested. Our goal is to make them self-sufficient, says Julie.

HATB’s largest initiative focuses on domestic violence awareness and prevention in area high schools, pointing to statistics that 1 in 3 teenagers will suffer some form of abuse. One of those domestic violence victims helped by HATB named Melissa, was stabbed 32 times by an ex-boyfriend, now serves as the organization’s Domestic Violence Prevention Advocate. She shares her story of abuse and survival to area schools and agencies to abusers,” says Julie. educate others about the warning signs. By working with community agencies and corporate sponsor donations HATB supports both the physical and psychological recovery for victims, offering financial support by defraying expenses for reconstruction surgery or other medical necessities to securing deposits for a place to live.

You’ll find Julie, two full-time employees and a legion of volunteers working out of an office inside the G&D store. The company donates the office space, most of the supplies and pays the salaries of the employees. Julie notes that unlike some charity organizations, she doesn’t take a salary or receive any government funding.

Julie’s advocacy work is visible across Tampa Bay. Frequently appearing on area media outlets, she helps spread the word about HATB and its services with community partners. Through donations and the annual fundraiser, Dancing With the Stars, the organization has raised over $1.1 million to date for hundreds of victims and families. This year’s event raised funds for the Suicide Prevention program at Crisis Center of Tampa Bay.

Fiercely protective of victims receiving justice against their abusers, Julie admits that her unwavering devotion and passion for helping others does take an extreme emotional toll on her. She remembers every victim, every gruesome detail of the horrific story, often displayed in graphic detail during trial proceedings. She appears in court to make sure the criminal justice system doesn’t inflict more traumas to victims or families by handing down lenient sentences.

“It’s a frustrating situation when I find that the victims do not have an advocate in the courtroom. We need to set the bar high for tougher sentences for rape and domestic violence abusers,” saysJulie. For every story of hope like Melissa’s, Julie knows there are still many others who still need support from HATB.

Holding back tears, she says, “I want it [the organization] to stay small. I want it to stay powerful, and always be a voice for people who don’t have a voice of their own.”

While HATB does tackle weighty social issues, the organization allows everyone to become an advocate to celebrate the lighter moments and the people that make Tampa Bay a better place to live. Through the random acts of kindness outreach program, HATB #KindnessWarriors can do something for a stranger, like buy a cup of coffee, buy toys for a needy child, or thank law enforcement with a gift card for dinner. It’s one small way for everyone to help others and leave a lasting impression.