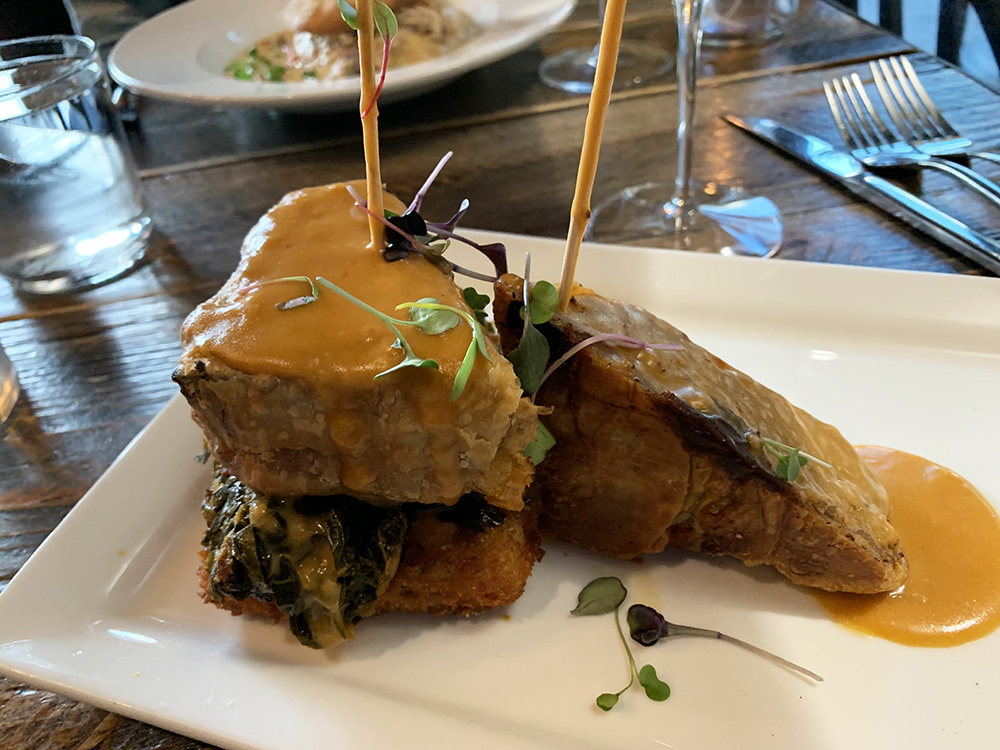 MMM…..Meatloaf! Trip’s Diner vs. The Mill

Though we may think of meatloaf as a quintessential U.S. dish, its origins go back as far as ancient Rome, according to The Atlantic, and it really took off after the invention of the meat grinder in 1899. Wikipedia traces it to (horrors!) scrapple, that for-some-reason-popular-in-Pennsylvania concoction that mixes cornmeal with whatever meat guts are hanging around.

And yes,  it has appeared for many years on the tables of moms, and depending on the mom who made it, you either have a fond memory of her special recipe or a sudden urge to purge. I’m in the former camp, and like many I was particularly taken by the crusty, ketchup-y top layer, without thinking too much about what else was in it.

So in the wake of Mom’s big day, I got to thinking: Who makes the best meatloaf in these parts? Consulting the oracle that is Trip Advisor (far preferable to Yelp in my opinion), I found two very different but sort of similar establishments at the top of the list: Trip’s Diner and The Mill, the former a cherished local chain with outposts on both sides of the bay, the latter an upscale, down-home concept by award-winning chef Ted Dorsey, and a restaurant that, like Trip’s, was launched in Pinellas and expanded to Hillsborough.

Which one sliced up the better loaf?

Let’s peek in the oven and find out.

It’s no wonder this place is always hopping. The servings are generous, the waitstaff is friendly and alert, and the food is damned good. There’s usually a line on Sunday brunch days, and a little after lunchtime on a recent weekday all the booths were filled but some tables were available; we got one by the front window with a view of the patio, which fronts onto busy MLK. The traffic didn’t seem to bother the sweet little pink-feathered heron wandering amongst the outdoor tables waiting for scraps.

Opened in Seminole and St. Pete in 2012 before expanding to Tampa in 2016, Trip’s is named in honor of owner Gordon Stevenson’s triplets. The decor — which includes bits of Floridiana like brochures, postcards and the like embedded under the glass tabletops — seemed the perfect backdrop for a lunch of classic meatloaf. And that’s the version Trip’s serves: the classic. It’s even got a homey name: “Gammy’s Special Recipe with Beef, Vegetables and Topped with Tangy Tomato Brown sugar Sauce.”

The loaf: I don’t know whose Gammy came up with the recipe, but she done good. Trip’s is the meat loaf your mother (or your gammy) made, or the one you wish she’d made: dense but not heavy, with fresh, flavorful ground beef bound together with oats and yes, with that ketchup-y crust, cooked to the perfect char. The “Tangy Tomato Brown Sugar Sauce” was more sweet than tangy, but it made for a good dipping sauce for the garlic toast.

The sides: Yes, garlic toast. It comes with meat and fish entrees at Trip’s and it’s delicious: a big slice of toasted country bread with a garlicky kick. As for the sides, there are multiple options; I chose the mashed potatoes — perfectly cooked, with chunks of red-skin potato amidst the mash — and greens, also stellar (and served in a bowl on the side so the likker doesn’t mix up with your meatloaf, not that there’d be anything wrong with that).

Ted Dorsey was one of the pioneers of the local trend toward farm-sourced, chef-driven restaurants, bringing his culinary panache to places like Ciro’s, Boca, Copperfish and The Mill, which opened in 2015 in the busy 200 block of Central and in 2019 in South Tampa. The key word for both cuisine and decor at The Mill is “rustic”: rough-hewn wooden tabletops, burlap-bag shades on the overhead light fixtures, interlocking, over-sized gears as wall art.

But it’s got an unquestionably up-to-the-minute vibe, too, with big windows and sidewalk tables offering a front-seat view of downtown St. Pete’s motley throngs, and a lively bar scene with inventive craft cocktails like a mix of vodka, Earl Grey tea and Pamplemousse liqueur called Tea Time. And Dorsey brings his own contemporary twist to rustic American recipes, keeping the soul of the original while enhancing the flavor with unexpected additions like a panko crust on deviled eggs and a thick, creamy almost pot-pie approach to chicken and dumplings.

The loaf: The Mill‘s version is called Meatloaf Wellington and it’s only available at dinner, which tells you something. This is more than a meatloaf, it’s a production. Big trapezoidal hunks of meatloaf covered in “honey hot sauce gravy” sit atop braised collard greens and a “loaded potato casserole,” which is like the best (and biggest) hash brown you’ll ever eat. And the Wellington part? The loaf is wrapped in a puff pastry, which is tasty in its own right but does the double duty of keeping the meatloaf moist (the biggest challenge in making meatloaf, as home cooks can attest). And it’s all utterly delicious, with the tang I was missing in the Trip’s version and a unity of presentation that has the clear mark of a chef’s vision.

And the award for the most creative loaf goes to…

OK, maybe not fair to compare diner fare with a fine-dining creation. But here’s the thing: I absolutely recommend the meatloaf at Trip’s. It all depends on what you’re in the mood for: a good, hearty, well-made meatloaf for a casual lunch or dinner — or an artfully reimagined version of the dish that’s just as satisfying, but with added oomph and imagination that makes it a meal to remember. Both are exemplars of their type, but I have to give a slightly bigger nod to the memorable meatloaf at The Mill.