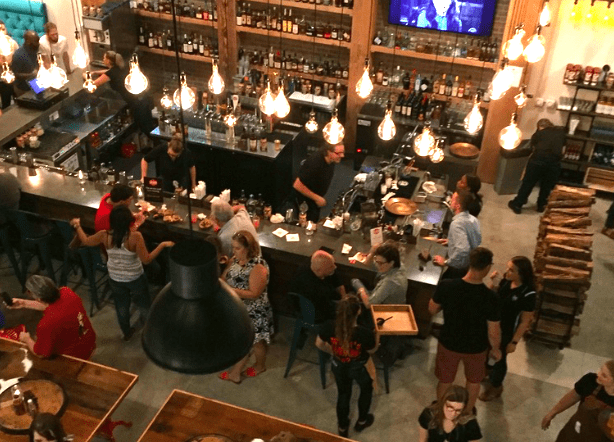 Opening Nights: The hype is right at Dr. BBQ

As a general rule, it’s not a good idea to judge a restaurant in its opening days. Even at the most meticulously planned establishments, the staff and the kitchen are still in the learning stages, and first-week jitters can undermine pros and newbies alike.

Given that, I shouldn’t really report on my meals at two of the buzziest new restaurants in town — Dr. BBQ in St. Petersburg and Osteria Kitchen + Bar* in Tampa — because I ate at the former during a preview event and at the latter, entirely by accident, on the first night it was open to the public.

But the thing is, they were both so good.

Let’s start with Dr. BBQ. A collaboration between the world-renowned barbecue expert Ray “Dr. BBQ” Lampe and Suzanne and Roger Perry of Datz/Dough/Roux fame, the restaurant in St. Pete’s EDGE District had been hotly anticipated for years. When it finally opened in mid-October with a series of friends-and-family gatherings, guests discovered a menu that lived up to the partners’ stated goal to offer “New [emphasis mine] American Barbecue.” Sure, they’d bought a 7,000-pound Oyler smoker and hired a professional pitmaster from Texas (where Suzanne first got the notion of opening a ’cue restaurant while visiting her son in college, she told Creative Loafing in May of last year). But they also brought in influences from Korean, Vietnamese and Mexican cuisines, and dreamt up variations on traditional fare that make your taste buds wake up and say, “Huh?”

Take, for instance, one of my favorite dishes, which was also one of the most surprising, and not just because of its chuckle-worthy name. Mac-A-Phoni & Cheese eschews macaroni for chewy hominy, uses not just cheddar but tequila habanero aged cheddar queso, mixes in jalapeño and sweet onions and – here’s the best part – tops the whole thing with Flamin’ Hot Cheetos®. A small triumph – but I have to wonder what kind of late-night munchies attack led to its invention.

And while delicious brisket sliders and St. Louis ribs are of course on the menu, you can also order lamb belly in a bao bun or Go-Chu-Jang Sticky Ribs (baby backs in finger-licking-good Korean BBQ sauce), kimchi fries or smoked pork chorizo tacos. And you can wash it all down with bourbon — not just any bourbon, but rare bourbons under the supervision of Morgan Zuch, the award-winning bartender and Dr. BBQ’s beverage director.

As I mentioned, I got to know the restaurant during one of those soft-opening events, sampling from carts and trays and a well-stocked taco station. But the place already seemed to be hitting its stride, and the room has a vibe that seems just right. Housed in a former steel casting company, it’s so big and rustic (two generously sized floors) that it reminded me at first of one of those vast drinkin’ and dancin’ establishments in Music City. But it’s more urbane than that, more Austin than Nashville; I already have dreams of sipping a Jack N’ Cola on the upstairs deck after a Rays game, celebrating a win or drowning my sorrows while looking back at the Trop, right across 1st Avenue South.

Curling Up by the Fire: A fireplace feels like home, even in Florida