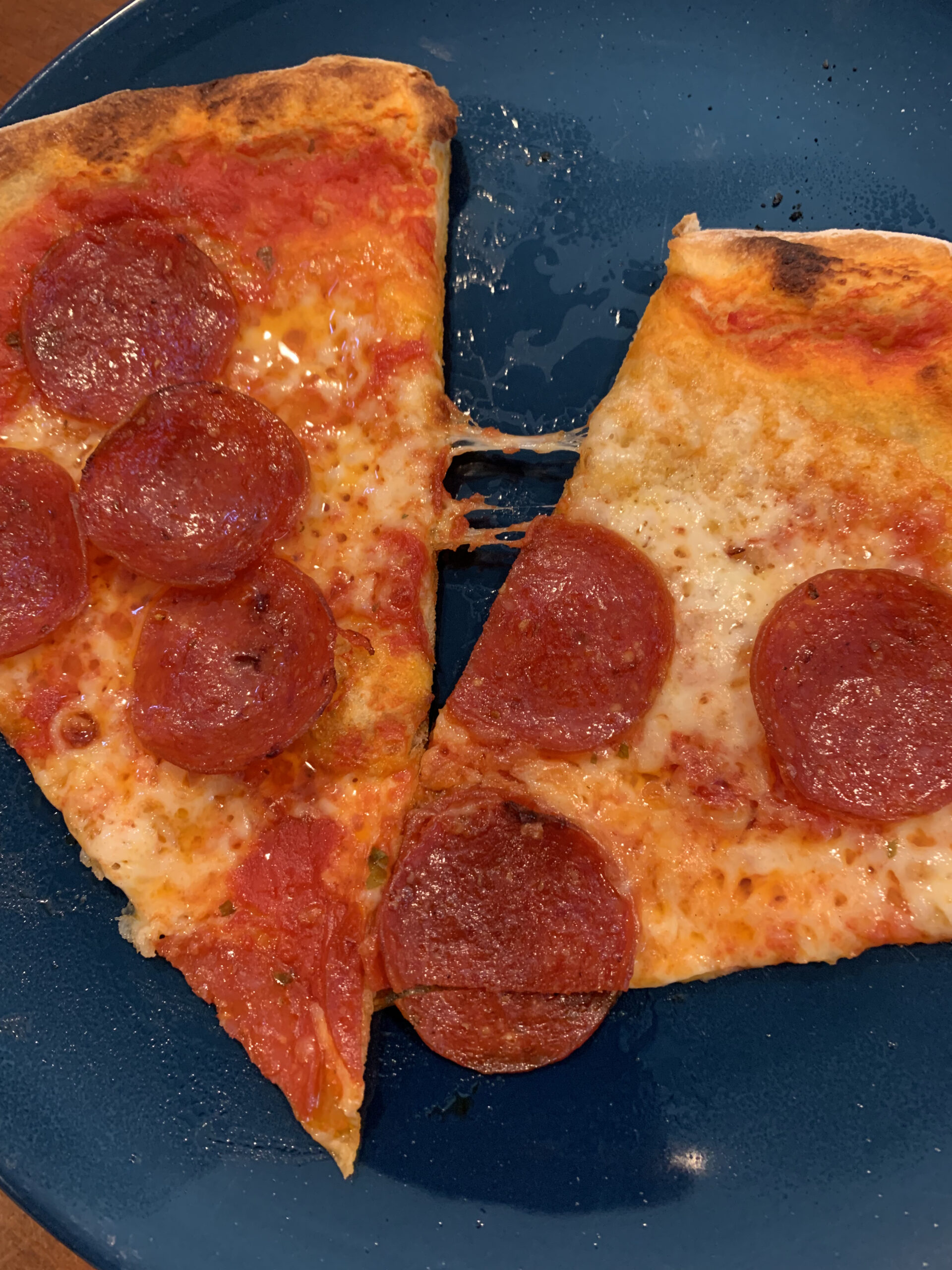 In this heat-seeking Friday Food Fight, we pit a local favorite against an 86-year-old newcomer.

I’ve been rarin’ for this Food Fight ever since we started the feature at RTB. In fact, it was one of the column’s inspirations. I’d begun to notice new restaurants opening up and touting particular dishes for which tried-and-true Tampa Bay businesses were already known. In this instance, Colony Pizza, a venerable chain from up north, was opening on St. Pete’s Central Avenue just around the corner from Fabrica Pizza, the St. Pete outpost of a Tampa Bay mini-chain.

I’m a big fan of Fabrica’s Pizza of the Month offerings, including one I was always delighted to see return: a charred pepperoni pizza with hot honey. Then news of Colony’s imminent arrival began to spread. Their specialty? Hot oil pizza!

Hot oil vs. hot honey — a battle made for the Food Fight?

Not quite. I’d hoped for as direct a taste-off as possible, pitting one hotted-up pepperoni against another in close succession. But no luck: Colony Grill didn’t open till after Fabrica’s hot-honey pizza had finished its latest monthly stint in October.

Soooo… I made do. I ordered a pizza at Fabrica with chili oil and pepperoni, and tried Colony the next day.

Here’s how the pizzas sliced up.

When Jonathan and Estefania Perez launched the first Fabrica in Tampa’s Channel District six years ago, it was kind of a big deal. The opening was viewed as a good omen for the still-developing area’s future viability, and then-Mayor Buckhorn was on hand for the “dough-cutting.” A year later, the Tampa Bay Business Journal called Fabrica a “burgeoning success story,” and in Dec. 2017 the Perezes opened the St. Pete branch. According to a report in Creative Loafing, the couple was inspired to create their fast-casual Italian concept by time spent in Turin, Italy, leading them to a menu of made-to-order Neapolitan-style pizzas, plus salads, sandwiches, snacks, desserts, and wine and beer on tap.

Crust: Classic. Chewy but not too chewy, soft but not doughy, with those burnt, crackly bits and blisters from its time in the oven. Expertly stretched as you watch.

Ingredients: The high-quality mozzarella and big shiny coins of pepperoni were delicious. But I have to say I missed the hot honey and those little charred, curled-up pepperonis from the monthly special a lot.

Taste: I’m a sucker for Fabrica’s house-made “Rossa” red sauce, and it turns out their chili oil is housemade, too. The flavors are consequently rich and deep.

Ambience: Friendly young pizza-makers and counter folks, with high-top and long communal tables inside, wine by the glass or carafe, plus a patio where customers (and their pups) love to linger. All in all, a chill refuge from Central’s bustle. (Both the Tampa and St. Pete Fabricas are housed in the ground floor of high-end apartment complexes, Pierhouse at Channelside and The Hermitage. As a onetime resident of the latter, I have to say it was nice to have an upscale pizza joint a few steps away.)

I love the backstory of Colony, which despite its name doesn’t have a grill at all. It harks back to 1935 Stamford, Connecticut, where the Irish-American owners of the original Colony agreed to let their Italian chefs add pizzas to the  menu on one condition — they had to be small enough in diameter to fit on the restaurant’s narrow bar and the slices had to be easily manageable with one hand, leaving the other hand free to hold a glass. The result, the so-called “bar pie,” is a genre unto itself — and grew so popular, especially with its trademark hot oil topping, that all the other Colony menu items went away. With locations in Connecticut, New York and Virginia, Colony is now introducing the bar pie to St. Pete. Will we eat it up?

Crust: So thin you can hardly see it. So crisp it practically crackles. It’s a whole different style from the Neapolitan of Fabrica, so your preference for one over the other may rest on personal preference rather than pizza quality.

Ingredients: The thin layer of sauce and cheese goes right to the edges, kind of like the water in an infinity pool, and the cheese melts in a lacy all-over pattern. The pepperoni slices are big and tasty. And that liquid puddling on the surface ain’t water (or grease) — it’s the vaunted hot oil. (I had to check to be sure; we ordered a mushroom pizza without the hot oil, and it had no such puddles.)

Taste: I love hot. And Colony’s hot oil is hot. This may be one reason, besides portability, that a hot-oil bar pie is the perfect bar snack; it requires copious drinking. The only problem is that the taste of the oil tends to overwhelm any other flavors; there’s not the depth you get in the hot-oil (or hot-honey) variations at Fabrica. (This plays out in the non-hot-oil mushroom version; the flavors don’t sing.) But I love the crispiness of the crust; it’s fun to eat, it doesn’t make you feel like you’re eating a lot of bread with sauce on it, and the slices are eminently freezable — a great next-day snack.

Ambience: Big, warm, welcoming, with lots of wood and a variety of seating options (including, of course, a bar). The servers and managers were super-solicitous and very informative. There’s outdoor seating on the sidewalk out front, too. (The restaurant is in the former home of beloved record store Daddy Kool’s, which has relocated to the Warehouse Arts District in the Factory complex.) Get a high-top by the window for a view of one of the most interesting intersections in St. Pete, where 7th St. S. & Central meet up. It’s a sociological experiment in real time as you watch to see which cars stop for pedestrians at the (frequently) blinking crossing light. Another commendable Colony feature: Each restaurant features a “Wall of Heroes,” a display of photos honoring those who have served in uniform either as first responders or members of the U.S. Armed Forces. The public is invited to submit photos via mail, email or the Colony website.

And the winner is…

This was a close one. I urge you to try Colony for its new-to-many-of-us pizza style and the warm hospitality. But to me the pizza at Fabrica just tastes better — it’s as simple as that.

And here’s a holiday bonus: Buy a pizza at Fabrica and get one free when you donate a new unwrapped toy. December’s pizza of the month (below) would be an ideal choice for a holiday party: Made with a bianca base, mozzarella, goat cheese, sun dried tomato pesto & italian sausage, then topped off with chives, it’s kinda red-and-green Christmasy.