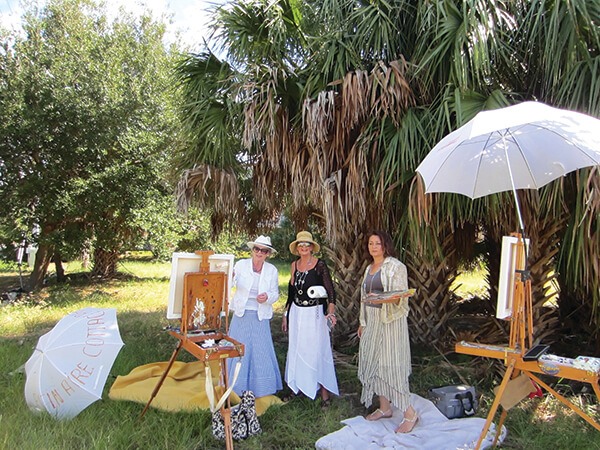 Stroll down one of the shell-paved side streets in Indian Rocks Beach and you might come across a delightful group of women who look like they’ve stepped back in time.  They’re dressed in long skirts, lacy blouses and beautiful straw hats.  Often, they carry umbrellas to shade against the sun.

But it’s not just their style of clothing that sets them apart.  Violetta Chandler, Mary Rose Holmes and Helen Tilston are known as the Plein Aire Cottage Artists of Indian Rocks Beach.

Since 1999, the three have forsaken the studio and set up easels in front of whatever captures their fancy and their hearts.  They have a passion for painting the outdoor landscape in plein air – a French term and style advocated by master impressionist painters like Renoir and Monet.

By now the three are well known around town and cause quite a stir when they’re out. “People stop by and encourage us, or they blow their horn and wave from the car. We’re a novelty with our hats and dress,” jokes Helen.  “It’s fun for us and fun for the town.”

Over the years they’ve captured on canvas the small town charm of Indian Rocks Beach, one of the few seaside communities that still has a sizeable collection of quaint, historic beach cottages dating back to the 1920s.  In fact, the artists have been credited with helping save many of the cottages from being torn down and turned into condos.

Blazing red Bougainvillea, the dappled sunlight of a bright Florida day, children playing on the beach, sailboats and the pastel colors of old-style beach cottages are the hallmark of their art, which has the soft, romantic brushstroke of the French impressionists they admire.  In 2007 the Florida Trust for Historic Preservation presented them with an award for preserving a chapter of Florida’s past that is quickly disappearing.

The three met at an art class. Violetta was the instructor.  The three hit it off right away and began painting together in Indian Rocks Beach.  One of the first cottages they painted was the historic Scruggs Harbor cottage, which was on the verge of being demolished – or “smashed” as Mary Rose likes to emphasize.

Their paintings caught the attention of locals who not only admired their work, but also began advocating for preserving the town’s history.  A few years ago, the artists helped create an annual Plein Aire Artist Preservation Award, which is given to businesses and cottage owners who protect and renovate their properties.

The three produce a limited edition “Save Our Cottages” Calendar with proceeds going to the town’s library and historic museum.  In addition, they donate a painting every year to the Indian Rocks Beach Action 2000.  Giving back to the community is important to them.  Mary Rose estimates that they’ve donated over $35,000 to the city.

A Passion for Art

Rarely a day goes by that the three don’t pick up a paintbrush.  “Even if we’re not feeling 100 percent we still want to paint,” says Helen.  “We get into the zone,” says Mary Rose.  “Three hours could go by and you’re so focused that you’re not hungry or thirsty.”

The three are known for their triptychs, a three-panel project where each artist paints a separate panel; then all three are put together for the finished piece.  “We do a few rough markups together to make sure the line, angles and perspective are right and then we separate and paint individually,” says Helen.  “We have to work fast, the sun and shadows are always changing.”

Health & Happiness What Makes You Laugh?

What Makes You Laugh, Bonnie Agan?

Health & Happiness What Makes You Laugh?

What Makes You Laugh, Chelsea McMillan?