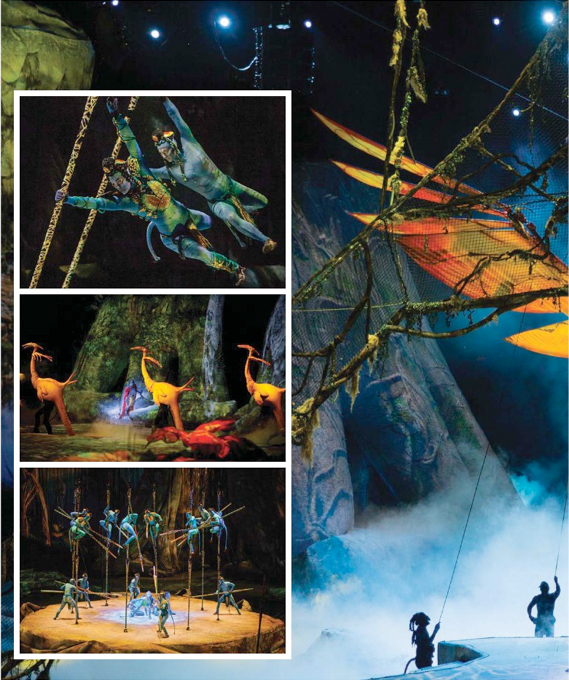 An exotic world inhabited by mesmerizing creatures and clan members distinguished by blue skin and long, lemur-like tails is the setting for the latest, and possibly most ambitious, production yet from Cirque du Soleil.

TORUK—The First Flight is inspired by the blockbuster ﬁlm AVATAR but goes beyond that storyline by going back in time 3,000 years before humans ﬁrst set foot on Pandora. This never before told mystical tale uses live performers and multimedia production to introduce audiences to an immersive experience.

The show also marks a ground-breaking collaboration several years in the making between Cirque du Soleil and AVATAR writer and director James Cameron. Both of these artistic visionaries have brought fantastic worlds to life on stage and screen. Together they are collectively pushing artistic boundaries to create an entertainment experience unlike any other.

No matter whether you are a fan of the ﬁlm, Cirque du Soleil or new to both, audiences will easily follow along with the help of a Na’vi guide who, helpfully, speaks English while spinning the story about two boys intent on saving the sacred Tree of Souls from destruction and, in turn, the Na’vi people who inhabit Pandora.

That element alone sets this apart from most Cirque du Soleil shows which are typically open to interpretation rather than deﬁned by narration.

Another difference is the way video projectors and lighting transform the performance venue into a giant screen encompassing the entire arena. Audiences are not merely looking up or down but all around. Video projections sometimes overﬂow beyond the set spilling into the audience to create the illusion they are actually on Pandora.

The total projection surface, excluding those areas overlapping the audience, is about 20,000 square feet or more than ﬁve times the size of a standard IMAX screen. In addition to that staggering scope, video effects sometimes synch with the performers’ movements. Beautiful bioluminescent trails

The use of state-of-the-art puppetry marks another way this show dramatically differs from the 36 Cirque du Soleil productions pre-dating TORUK. These magical and somewhat menacing, ﬁgures feel as real as any performer as they inhabit the stage and interact with the Na’vi.

TORUK—The First Flight made its world debut in November 2015. Currently on tour, it will be performed in Tampa at the AMALIE Arena March 17–20.