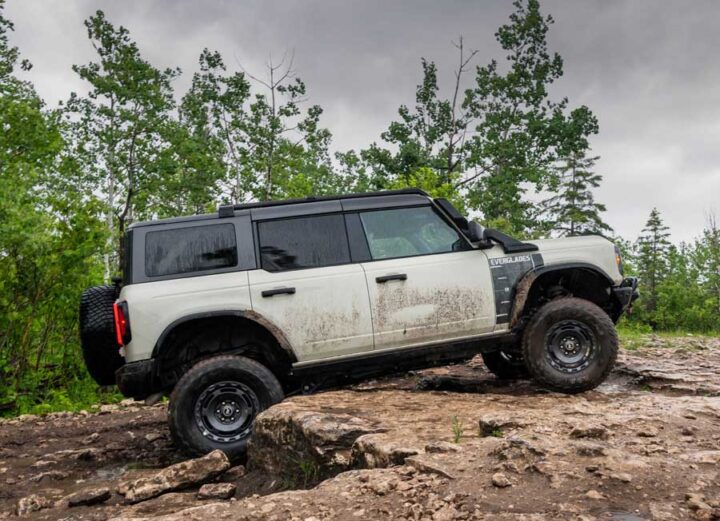 Full disclosure here. In my week with Ford’s new special edition Bronco Everglades 4×4, I sadly didn’t take it to the Everglades and wade through gator-infested muddy water 36.4 inches deep. Nor did I get to use the standard 10,000-pound pull capacity Warn Zeon 10 electric winch bolted to the front bumper, to extract myself from the aforementioned 36.4 inches of icky-sticky mud. But had I ventured into that 36.4 inches of muddy water and, without warning, sunk another few inches, I could have taken comfort from knowing the Bronco Everglades comes with its own snorkel. Similar to that piece of swimming apparatus, this boxy piece of plastic runs up the passenger-side windshield allowing the engine to breathe when water is up to the hood. Finally, I didn’t go play in the Everglades because I would have hated to see the Bronco’s lovely gray paintwork and nicely-painted 17-inch wheels with their quite massive 35-inch tires get, well, dirty. Obviously I’m not Ford’s target buyer. But boy was it fun driving it around town and intimidating all those similarly-big-tire’d Jeep Wrangler Rubicons around. But while some buyers will no doubt go play in the goop, I’m predicting the vast majority will use their Bronco Everglades as automotive eye-candy. It’s the same way plenty of pick-up truck owners add enormous wheels and lift kits to the F-150s and Silverados. It’s the same way people spend big bucks on a 200mph supercar and never get it out of first gear. The Everglades is the latest in a line-up of seven special edition Broncos being offered up to adventure-loving fans by Ford. Priced from $54,595, its slots between the $52,820 Wildtrak and $70,095 Raptor. Only offered as a four-door with a removable hardtop roof, it comes standard with Ford’s hardcore Sasquatch offroad package. This includes monster 35-inch Goodyear mud-terrain tires, electronic- locking front and rear axles, HOSS suspension – short for High Performance Off-road Stability Suspension – and Bilstein position-sensitive dampers. Stick numbers to the doors and you could enter the next Baja 1000 offroad desert race and do pretty well. Powering the beast is Ford’s highly-capable 2.3-liter turbocharged four- cylinder packing 300 horsepower and 325 lb-ft of torque and mated to a 10- speed automatic. To ensure the Bronco can haul itself through any Everglades-grade mud and clamber over the occasional Burmese python that gets in the way, it’s equipped with a GOAT twist knob on the center console. Standing for Goes Over Any Terrain, it lets you select one of seven driveline settings to match the conditions. Pick from normal, eco, sport, slippery, mud/ruts, sand and rock. For our mostly on-road escapades, sport was a blast. Despite the Bronco Everglades looking as wild and rugged as Leo DiCaprio in that The Revenant movie, the way it drives is surprisingly civilized. The turbo four-cylinder is smooth, quiet and packs no shortage of muscle. Coupled with the rapid-fire responses of that 10-speed auto, it can scoot away from the stop light and zip past slower traffic on a two-lane. It also carves curves with confidence thanks to its suprisingly precise and nicely-weighted steering, its coil-sprung independent front suspension, and those Bilstein dampers. It rides smoothly too. But weighing-in at over 5,000 pounds and having the aerodynamics of a shipping container, fuel economy is well, terrible. My mostly highway driving meant an average of 17mpg. And the Bronco’s patchwork of removable plastic roof panels – a total chore to lift off and stow – results in the kind of wind noise you normally get from a Cat 3 hurricane. Yet even if you don’t venture into the Everglades as part of your daily commute to the office, this oversized Tonka toy is just a whole lot of fun to drive. As for using it to ferry the kids to school or soccer practice, or rolling through the Starbucks drive-thru, there’s nothing cooler. But next time I’m getting it dirty.