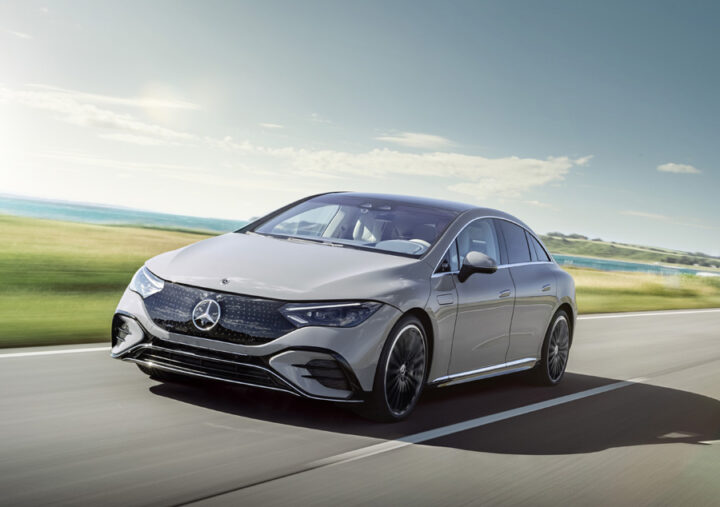 Electric cars still take my breath away, like a game-winning Tom Brady throw. And we’re talking football throwing here, not an iPad tablet.

Their slingshot acceleration, their serene smoothness, their eerie lack of noise, and the overwhelming feeling that you’re driving a true car of the future. All great.

And plugging-in, rather than filling up, is also a major attraction.

After a joyous week piloting Mercedes’ all-electric 2023 EQE 350 4Matic, my love of ohms, volts, kilowatts and torques was only heightened.

As the EQE badge suggests, this is an electric E-Class sedan, though it shares not a nut, bolt or washer with its gas-fueled sibling.

Compared to a regular E, the EQE is 2.3 inches longer, 2.5 inches wider, 1.7 inches taller and a whopping 7.1 inches longer between the axles for more cavernous interior space.

Yes, some of my fellow reviewers have criticized this new EQE, describing its rounded styling as “dumpling-like”, un-Mercedes, or as stylistic as a bar of Dove soap.

I disagree. See it in profile and its body looks as if it was carved by the wind. Which essentially it was. It has a drag coefficient of 0.20 which is slipperier than a Tesla Model S or new Lucid Air.

This thing is roughly as streamlined as Michael Phelps in a Speedo LZR rubber swim suit.

The bow-shaped roofline is just gorgeous, with that swept-back windshield and coupe-like rear. Love too those muscular shoulders over the rear wheels.

And there’s no mistaking that quirky, star-filled, black-paneled grille with the oversized Mercedes three-pointed star, just in case you forgot what you were driving. Terrific 20-inch wheels too, with their five slender spokes and wind-cheating, see-through star-pattern inserts.

To get all techie for a moment, the EQE 350 4Matic I’m driving has electric motors front and rear packing a combined 288 horseys and 564 lb-ft of torque.

And while our 350 4Matic’s estimated 305-mile range won’t win it any prizes at electric car finishing school, it’s more than sufficient for the commuting needs of most drivers.

Climb aboard and even George Jetson would be wowed by the EQE’s futuristic interior. It’s hard not to be “gob-smacked”, as we say in merrie olde England, by the massive glass screens that make up the dashboard.

I love the 12.3-inch driver’s instrument cluster which seems to float in front of the dash. That, and the 17.7-inch touchscreen with its pin-sharp graphics that flows up from the center console like a wave.

Me, I wouldn’t pick the slightly dark and oppressive black and gray color scheme of our test car; Kentucky coal mines have more atmosphere. Some of the light-grays with lighter, open-pore woods, look a lot more luxurious and inviting.

But there’s space a-plenty here, especially in the back. And back seat traveling is enhanced by the EQE’s quite-amazing panoramic glass roof that runs almost to the rear window to flood the cabin with light.

On the road, I found this “starter” EQE to be an absolute delight to drive. No, it’s not pin-you-back-in-the-seat fast, but it’s spookily quiet, rides like it’s floating on air, and handles itself with precision and agility.

Prefer an SUV? Wait until early next year and there’ll be an EQE SUV. Which might just be the EQE