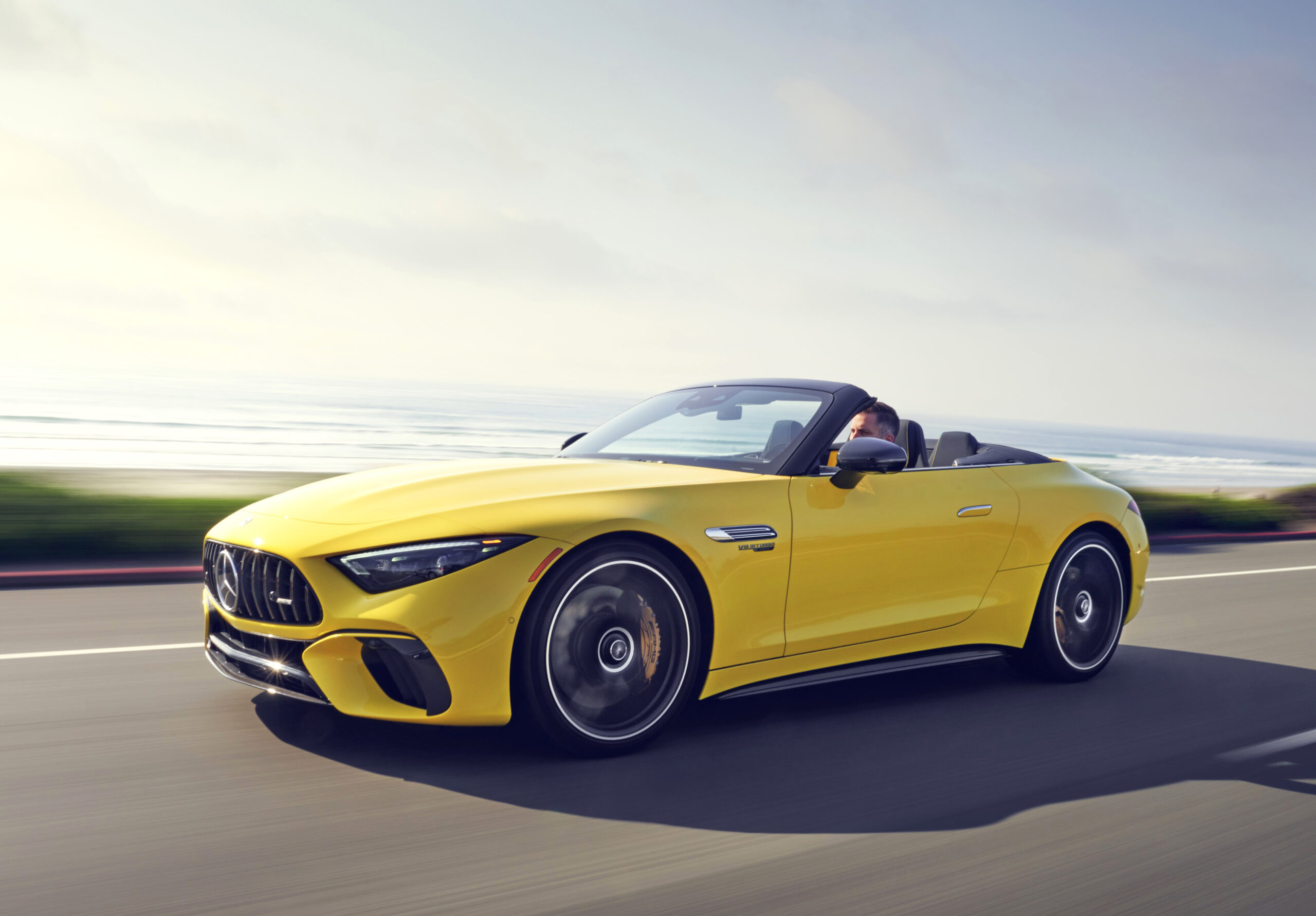 The all-new Mercedes-Benz SL roadster is a (three-pointed) star reborn.

Remember an Armani-clad Richard Gere behind the wheel of that gleaming black Mercedes-Benz 450SL in the 1980 classic American Gigolo?

With Blondie’s “Call Me” booming in the background, the SL cruising along Pacific Coast Highway through Malibu was a rolling testament to brooding lust, elegance, and perfectly gelled big hair.

Alas, in recent years, the oh-so-classy SL has lost much of its mojo as our love for drop-top sportscars has taken a nose dive. But the SL — short for Sport-Leicht, or Sport Light — is too big a nameplate for Mercedes to give up willingly. After all, those two little letters have been gracing the trunk lids of low-slung Benz sportsters since the legendary 300SL from 1952.

So, drum roll please: The SL is back, brand new from the wheels up, with huge changes that include standard all-wheel drive, a switch back to a canvas top in place of a folding metal lid, two-plus-two seating, and V8 power.

And to show how serious Mercedes is in the renaissance of the SL nameplate, it handed over the development to the performance wizards at AMG. Hence the fancy new name — Mercedes-AMG SL.

Two versions will be on offer come springtime. Take your pick from the new SL55 powered by an AMG-massaged 4.0-liter twin-turbo V8 cranking out 469-hp. Or step up to the muscled-up SL63 with a 577-hp version of that turbine-smooth V8.

See the new SL in the metal and gone is the bland, slightly milquetoast look of the previous generation model. Now it boasts a six-pack and a bulldog stance.

And see that new, barred-teeth front end in your rearview and trust me, you’re moving over. I love the retro front grille and the swept-back LED lights, while those lower air intakes are big enough to vacuum up a decent-sized critter.

Climb aboard, slide a finger across the new, iPad-like 11.9-inch tilting center screen, and that new canvas top powers back in a zippy 15 seconds, and at speeds up to 37mph.

Of course, there are those who will lament the jettisoning of the folding metal roof. As a Floridian, I liked the duality it gave, offering the choice of coupe for summer, convertible for winter.

But that folding roof gobbled up too much trunk space, added weight, and raised the car’s center of gravity, compromising ultimate handling. It also meant you couldn’t have rear seats, which is one of the new SL’s attractions.

Not that anyone over the age of 5 is going to fit back there. Legroom is on a par with Allegiant economy, or a Little Tikes Cozy Coupe. Think of it as a perfect place to hold a gym bag or a small Labrador.

But this new SL isn’t about dropping tops and trunk space. It’s all about driving. And Mercedes kindly flew me to Southern California to properly exercise this new SL on God’s driving roads, from Orange County across the San Jacinto Mountains to Palm Springs.

First up is the SL55. Even though it’s the milder of the two flavors, it still feels absolutely breathtaking in the way it catapults off the line and rushes to 60mph in a mere 3.8 seconds.

Rocketship performance, however, isn’t the 55’s only party piece; the way the car scythes around ridiculously tight curves, its new all-wheel drive system, rear-axle steering plus a Cray computer’s-worth of bytes and bits, give it an agility that’s little short of astonishing.

Yet it delivers this on-rails cornering with a smooth, bump-absorbing ride that adds a level of sophistication never seen before on an SL.

And the SL63 I tried next just amps everything up to eleven: 0-to-60 in 3.4 seconds and a top speed of 195mph, plus an exhaust note that sounds like Godzilla gargling with nails. It’s one sensationally fun car to drive, and to live with.

Make no mistake; this is the most hardcore, most involving, most technically complex SL ever. But it is also the most thrilling, the most rewarding to drive.

The SL is back indeed. And no more a pretty-boy Richard Gere. This car is definitely more Jason Statham.