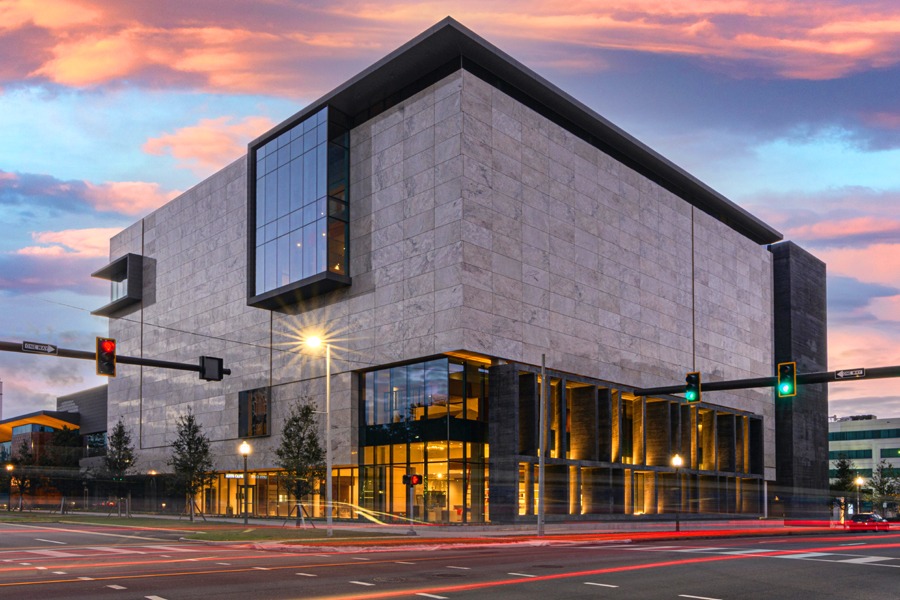 For six-plus years, the gorgeous behemoth rising up on the corner of 4th & 4th North in downtown St. Pete has been much buzzed-about.

How big is that thing? What’s going to be in it? It’s the collection of just one man? And it’s all, like, craft-y stuff? And is it ever going to, like, open?

Well, the speculation period is over. The Museum of the American Arts and Crafts Movement opened quietly on Sept. 7, and it’s stunning. (Photos of museum exterior by Joe Brennan, ©MAACM.)

First, though, some answers to those questions.

How big? 137,000 square feet, including more than 40,000 square feet of gallery space plus education and graphic studios, a retail store, a cafe, a research library, a theater, an event space and a destination restaurant (Ambrosia) over five floors. The building was designed by Tampa-based architect Alberto Alfonso in collaboration with the museum’s founder (and funder), Tarpon Springs businessman Rudy Ciccarello.

What’s in it? More than 800 works from the collection of Ciccarello and his Two Red Roses Foundation, considered “the most important private collection of the American Arts and Crafts Movement in the world.”

Crafts? You mean, like, pottery? Pottery, yes, and furniture, tiles, metalwork, lighting, leaded glass, woodblock prints, paintings, and photographs — all crafted between 1890 and 1930. In other words, these aren’t the DIY doodads you might find at a farmer’s market or even the inventive contemporary creations you might find at Florida CraftArt. The objects in this museum reflect, as the name indicates, a movement — a crucial period in the history of art and design during which fine artists and artisans countered the increasing industrialization of society with a return to hand-crafted simplicity and quality materials.

Rumor has it there won’t be a grand opening at the museum until later in 2021, but that means this is the perfect time to visit — before the crowds.

Here are 10 aspects of the museum and the collection that’ll get the buzz started all over again. (Photos below by David Warner for registrytampabay.com)

Move over, Dalí double helix! The stunning spiral at MAACM (above and top), hand-crafted from Venetian plaster, is about to challenge you as Most Instagrammable Staircase.

Marvel at the intricacies, like the hand-painted sunset scene on the 1904 linen press (above), the four-leaf clovers on a 1923 trestle table, or the appliqued blooms on a 1905 rose motif screen.

The sensuous pleasures of ceramics and polished wood figure prominently in the collection, but attention to texture and artisanal materials is evident in the architecture, too, as in the smooth interior panels of the so-called “ovoid” juxtaposed with the rough-hewn slate walls.

Bask in the glow of mica lampshades, abalone inlays and the extraordinary “Windmill” lamp in the lighting gallery (above), but also enjoy the way light plays inside and throughout the five floors.

Turn in any direction and the views are sublime, whether you’re looking down into the five-story atrium; looking through a stained glass entryway into the architecture gallery; or looking out Frank Lloyd Wright leaded glass “light screens” onto the St. Pete cityscape.

Ask “Where’s the bathroom?” and you might be directed to the Iris Bathroom, saved from a 1914 Ohio home and notable for its 1,200 glazed tiles depicting irises and water lilies. The bedroom on the fifth floor, austere yet serene, was assembled from a variety of sources. But my favorite of the reconstructed rooms is the 1907 entry hall from the James A. Culbertson House in Pasadena, CA (above) — a redwood-paneled masterpiece by the architects Greene & Greene.

The decor of this period is a pleasing mix of sinuous and severe — from the swirling leaves of Fritz Albert’s vases and the stylized florals in a Harvey Ellis side chair (above) to the strict verticals of a trio of Frank Lloyd Wright chairs and the plain appeal of the iconic Morris chair.

The work of female artisans is everywhere in the museum, as it was in the movement. The Queen Anne’s lace on a 1904 linen press was painted by Zulma Steele. The dishware produced by Boston’s Paul Revere Pottery was created by the so-called Saturday Evening Girls, for a company founded by two women. The Medusa lamp, adorned with abalone (above center), is the work of Elizabeth Eaton Burton; she was known for lampshades that “embrace the shell.”

The peacock panel above, made for an overmantel in 1910 using the painstaking sgraffito technique, is indeed a dazzler. So is the 1912 tile floor from a boathouse on Newport Harbor, RI, depicting sailing ships from thousands of years of maritime history. But it’s the nautical mural in the lobby that has the best back-story. Made of 600 tiles in 1914 by the renowned Rookwood Pottery Company but never installed, it is being seen in its entirety here for the first time; the tiles had dispersed to multiple owners over the years and were purchased by Ciccarello and assembled for display at MAACM.

Two special exhibitions are currently on view, and they’re a must. Love, Labor and Art: The Roycroft Enterprise is a fascinating look at the country’s first and most successful Arts & Crafts community. The photo show — Lenses Embracing the Beautiful: Pictorial Photographs from the Two Red Roses Foundation — is worth a visit just for Edward Steichen’s portrait of sculptor Auguste Rodin (above center) and Alfred Stieglitz’s somewhat startling nude of painter Georgia O’Keeffe.

But wait, there’s more! Do seek out the beautiful pianos, the extraordinary Greene & Greene chandelier, the sea-breezy paintings, the “Fairy Tales with a Purpose,” the gift shop (Frank Lloyd Wright tea towels!), and the cafe (carrot cake, cappuccinos, even burgers!).

That’s just a sampling. Go this weekend and get your buzzing rights: “Oh, you haven’t been to MAACM yet?”