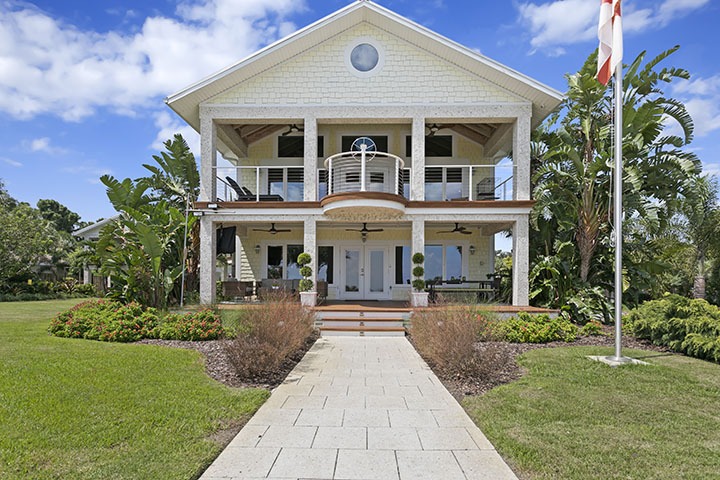 A stunning waterfront compound, restored in the Old Southeast

The first time John and Eva Forney laid eyes on the place where they would eventually live, they had no idea what they were looking at. They were in their son’s sailboat on Thanksgiving weekend in 2013 when he stopped at a sandbar in Tampa Bay with a view of a waterfront park they’d never seen before. Longtime residents of St. Pete’s Old Northeast neighborhood, they’d rarely if ever ventured to the Old Southeast and weren’t aware of its crown jewel, Lassing Park, or the row of gracious homes that ran along the park’s border.

“We just thought this street looked really cool,” said John, “but really didn’t give it another thought.”

Eva and John weren’t yet married at the time, but they were engaged and looking for a place that would suit their blended family (eight kids in all, ranging from 14 to 29). A while later, Eva found an online listing for a property at 1803 Beach Drive SE that looked intriguing, but the main house had been divided into two rentals with no interior staircase between floors, and one of its two ramshackle garages had a second-floor apartment that was also occupied by a renter. The rehab seemed too complex to bother with.

But one day while John was on a business trip (he’s the president and CEO of UPC Insurance), Eva decided she’d check out 1803 in person — and realized when she got there that it was on the street they’d seen from the boat.

“Omigosh,” she remembers thinking, “this is where we were!” She immediately called John, who was in Bermuda, and said, “I think you need to see this.” Although the buildings were, in John’s words, “dilapidated and dangerous,” in December of 2013 they bought the entire property for $825,000.

“You had to have imagination,” said John.

That’s for sure. But their imagination — plus five years and almost $2 million in renovations and improvements — transformed the property, which is more than 100 years old, into a uniquely beautiful waterfront compound.

Why would they sell such a home after putting so much work into it?

“John and I are both very much always ready for the next thing, the next period in our life,” said Eva. “And we’re excited about it.”

“We’re not attached to things, even things as beautiful as 1803,” said John, who said they would be moving to a condo on Bayshore Boulevard in South Tampa. “It feels like we did what we came here to do.”

Did they ever. Take a look: