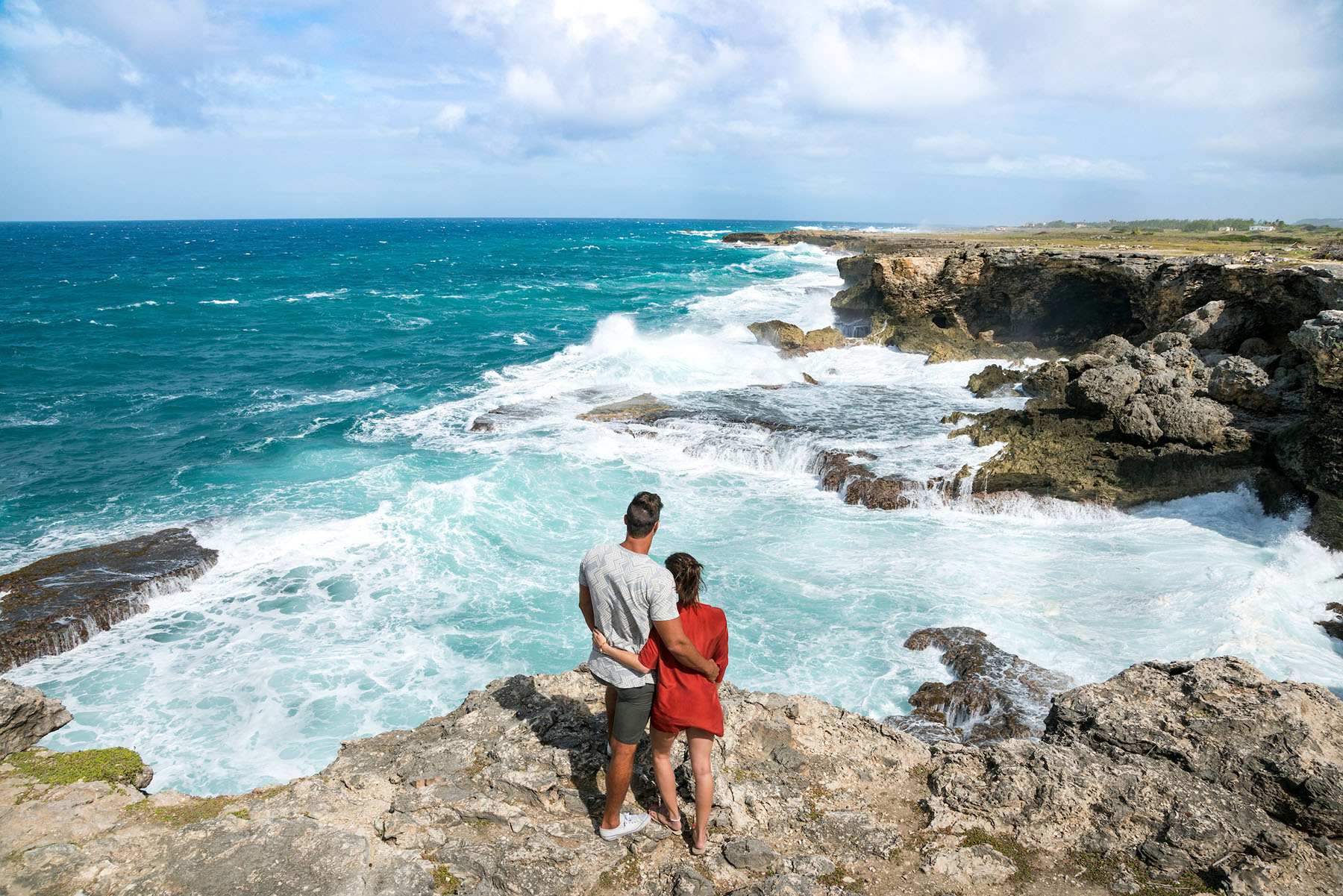 A delayed departure meant that my flight to Barbados landed after dark. Which wouldn’t have been a big deal, except that I had rented a car and in Barbados, the steering wheel is on the right side and they drive on the left.

I sat frozen in the driver’s seat, pondering the 45-minute drive from the airport and the rental agent’s warning to watch for potholes. My hotel is located about as far as you can go in one direction on a 166-square-mile island placed the farthest east of any in the Caribbean.

“I’ve done this before,” I reminded myself, recalling trips 18 and 20 years ago when I’d driven in England, Wales and Scotland. Back then I’d also had to tackle a left-hand stick shift and clutch. Courage began to replace fear, and I let out a whoop as I recognized the beginning of an adventure. So I shifted into “drive.”

Barbados is loosely shaped like a triangle, and each edge is distinctive. The airport, the UNESCO-listed capital of Bridgetown, the tourism core and most of the population of 300,000 are located across the wide southern swath. The Atlantic-facing east coast is the wild side, with cliff hikes and massive stone formations whose bases are eroded by powerful waves that lure top surfers.

The west coast is all about beaches and the placid Windex-blue waters of the Caribbean, ideal for looking at, swimming in or sailing over. Luxury resorts and enclaves – including pop-superstar Rihanna’s villa at Sandy Lane – are interspersed between fishing villages and give this shore its descriptive name, the Platinum Coast.

That’s where I was headed. Port Ferdinand Luxury Residences & Marina is as far north on the Platinum Coast as you’ll find a hotel and notable for its spacious villas overlooking the only fully secured luxury marina on the island. Sure, I could have taken a taxi, but I wanted the freedom to explore the less-visited northern region on my own.

I arrived at the gatehouse of Port Ferdinand with both the car and my nerves intact.

Many people who vacation somewhere as comfortably luxurious as Port Ferdinand may not want to ever go off-campus. Believe me, I’d be tempted, too, so that’s why I rented the car. Otherwise, I might just as easily have read a book on the comfy sofa on my breezy, over-sized balcony large enough to host cocktails and dinner for 8. Or I might have taken the private water-taxi to the resort’s sister property, St. Peter’s Bay, to relax on the beach and enjoy an alfresco lunch and several glasses of rosé in its garden dining room.

But I recalled from a past visit that Barbados is stunningly beautiful, geographically diverse, its history rich and its people friendly and welcoming. Since arriving, I’d asked every local I’d met to circle someplace on the road map that I shouldn’t miss.

I was confident I could find most with Google Maps. For instance, Animal Flower Cave on the north point where the Caribbean and Atlantic converge, where I’d read that you descend steep stone stairs cut through the roof into a huge cave with a pool in which you can swim. But it was the places in between that I was afraid of missing. So in the spirit of my Adventure, I asked around until a stroke of karmic good fortune connected me with the resort’s head of security, Eddie Gibson, who happened to be off that day and offered to join me.

Eddie took the wheel of my compact rental (don’t tell the agency) and chose the scenic route. Just around the corner from the resort, men cleaned 2-foot-long fish on plywood tables perched between the shoreline at Six Mens Bay and the narrow road through Moontown lined with colorful wooden houses and a few small shops. Moontown, I’d heard, is a fun place to be on Wednesday-Friday nights – a north-side version of the famous Oistins Fish Fry down on the south shore. We passed Merton’s Place, with its large deck overlooking the Caribbean; it was easy to imagine the grillin’ and chillin’.

Then Eddie turned inland, the road boxed in by high walls of wild grass and sugarcane. “This here’s the country,” he said, explaining how Barbados is carved into 11 parishes, each with its own impressive Anglican church – after all, Barbados was English and then a British colony from 1625-1966 – and a couple dozen other places of worship. “There’s only one thing we’ve got more of than churches,” he said.

“Rum shops!” I’d responded, lamenting that on my last visit I hadn’t had the guts to stop at one on my own.

“They cater to locals,” he said, “but tourists are welcome, too.” I had a hunch that a rum shop was in the cards. What I didn’t expect was that the first we’d stop at would be his.

It was a Saturday afternoon and a car rally was underway in St. Lucy, the parish where Eddie has lived all his life. “I just need to stop by my shop and make sure everything is ready,” he said.

Gippo’s sits at the hairpin of a country road in Mount Poyer, a small village, and is painted race-car red with a white roof; a small cat with a nub of a tail sat on the front porch. It’s a neat, one-room affair with a counter and behind it, shelves lined with spirits. The custom, Eddie explained, is to buy a bottle “and maybe a can of something to mix it with.” The bartender gives you a cup with ice and you pour your own. It was quiet when we arrived, and Marie, the Jamaican ringmaster behind the counter, dug an ice-cold Barbados beer called Deputy out of a cooler for me. At $3 BBD (just $1.50 USD), it was the bargain of my entire visit to the island.

We continued on, looping through cane and up hills, past the closed gates of St. Nicholas Abbey – built in 1658 and today celebrated for its tremendous history, garden and rum. But it was the lookout at Cherry Tree Hill that brought us to a full stop. I stood in the shade cast by mahogany trees, my gaze taking in a pastoral view to the east of fields rippling in the breeze and the rugged Atlantic coastline below. Men sell bottled water and trinkets, and though they’d be very happy to sell you something, they gracefully accept if you don’t.

A ribbon of road unspools downhill, through cane and pasture, and it’s clear why they call St. Andrew the Scotland District. We paused at the Morgan Lewis Windmill, the Caribbean’s largest and only working windmill, its massive wooden blades framed by the flowering garden around it. Then we continued past Cattlewash Beach and on to the popular Bathsheba, where a clump of surf photographers were huddled on a lookout with their tripods and long lenses ready for action. A line of surfers bobbed on their boards, awaiting the perfect wave.

Then Eddie cut inland through St. Joseph, toward Harrison’s Cave, where we were headed to tour millions of years of geologic history in its famed stalactite, stalagmite and waterfall-filled halls.

“Are you hungry?” Eddie asked. I know to always say “yes” when a local asks if I’m hungry. “I know a place,” said Eddie, “a rum shop with food.” He sidled my tiny rental into a small opening on the shoulder of the road; opposite was a wall of green cane.

Velma’s Place was rocking and the bar full. I followed Eddie’s lead to a small opening at the rear where the bartender met us to take our order, then passed it through a window to the ladies working in the steamy kitchen behind. We took our cold cans of spicy ginger ale out to the covered deck where the tables were filled with a mix of locals and tourists. A pair of gentlemen whom Eddie knew invited us to join them and soon we were digging in to heaving plates of Bajan specialties: battered marlin, spicy stewed cod, macaroni pie and a tasty plantain mash called cou-cou. The guys egged me on to try the spicy pepper sauce; I liked it enough to bring a bottle home.

A surprising cool breeze flushed through the patio as our conversation kept a steady pace. No one was in a hurry to leave.

Anchor your stay: Port Ferdinand is located on the north end of the Platinum Coast (west) and offers a fully secured, sheltered marina with 120 50-to-90-foot berths and nearby customs, immigration and fuel services. Each villa is configured as a 3-bedroom, 3-bath 2,500 square-foot (or larger), fully equipped residence, each with sophisticated décor, luxurious polished stone floors, spacious outdoor living space and marina views. Optional configurations allow guests to reserve a 1- or 2-bedroom villa instead. Standout amenities include the Sandbox Tree Spa, a jewel set in a tropical garden where you might see vervet monkeys at play in the afternoon, and play rooms for kids (video games) and adults (a complete golf simulator!) alike. Make the concierge your best friend for seamless planning of your visit. More at portferdinand.com.

Where’s the beach?Port Ferdinand is situated on a sheltered marina, not a beach, though the hotel offers its guests beach club services at nearby Nikki Beach. Guests are also welcome at the adjacent Nikki Beach Barbados, a privately owned beach club with a pool, bars, DJ, lounging furniture, etc. It’s like an all-day pool party. The resort’s private water taxi shuttles guests to sister property St. Peter’s Bay to enjoy the beach and non-motorized watersports including paddleboards and snorkeling gear. The restaurant has an outstanding shrimp scampi dish that pairs beautifully with the organic roséfrom Chateau de Leoube in Provence.

High season events: Sailors take note: Barbados Sailing Week, January 16-24, features four different racing series and events including the headliner, the Mount Gay Round Barbados Race, whose winning team is awarded their skipper’s weight in rum. Barbados has a huge polo tradition (remember, it’s been tied to Britain since 1625) whose season runs from January through May. Attend a match or take a lesson! Port Ferdinand can set up a group or private lesson at Buttals Polo Club. Horse racing is also popular and has been part of the Barbados sporting fabric since the British military officers began racing on the track called Historic Garrison Savannah in 1845.

Getting around: If you’re up for driving Barbados-style, rent a car (the service from Drive-A-Matic Car Rentals was excellent). Tips: use Google Maps to navigate and to see where you are going, take an extra lap at the roundabout if you’re unsure when or how to turn-off, and enjoy the adventure. If you only want a car for part of your stay, most agencies will deliver one to your hotel at no extra charge! Otherwise, taxis and private transportation are readily available.

Explore the island: The best part about exploring an island on your own is that you can’t get too lost. Don’t want to drive? The concierge can arrange for a private chauffeur and tour from the resort’s transportation team or join a scheduled tour with one of many island outfitters such as Island Safari, Sweet Fuh Dayz Tours, Glory Tours and Sun Tours.