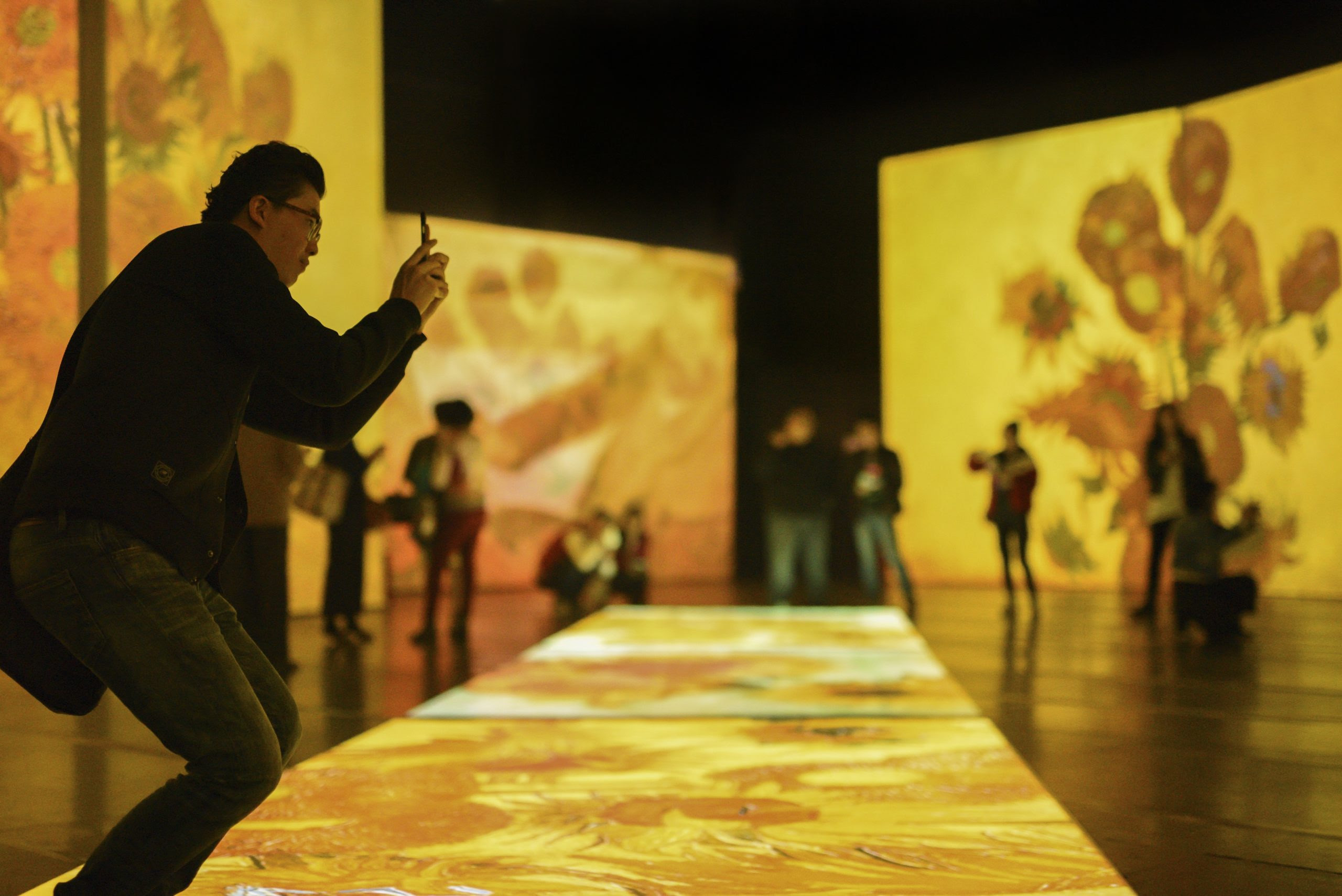 Yes, Virginia, there is an arts season. Many of these events were included in our dRTBestBets in the current Holiday Issue of duPont REGISTRY Tampa Bay, though be sure to check ahead with the venues; in these uncertain times, cancellations and postponements are still common.

Through Dec. 20
Nosotros La Gente (We The People) at American Stage. The theater’s digital series continues with a commissioned work by Jerry Montoya about two brothers, Santiago and Salvador, working the date palm fields in the California desert on the verge of WWII. When Santiago decides to enlist, Salvador promises to take care of his brother’s love, Sophie, in this story of faith, family, hope and love in America. Real-life partners Diana Garle and Daniel Llaca play multiple roles. americanstage.org. Buy tickets to a virtual live performance here.

Dec. 11-23
Nutcracker Outdoor Wonderland at the Straz. We can’t have a holiday season without a Nutcracker, can we? The Next Generation Ballet is going al fresco with this immersive performance that will lead audience members through the Straz Center campus and conclude inside a tent on the Riverwalk. At press time the entire run was sold out. strazcenter.org.

Dec. 11-24
A Christmas Carol: In Concert at freeFall. This musical version of the Dickens classic returns for a limited engagement as part of freeFall’s outdoor drive-in concert series. Featuring songs from the production, performed by a cast of live performers along with multimedia and narration from the original novella, it’s a recipe for safe family fun. (The company’s drive-in adaptation of War of the Worlds was a blast!) freefalltheatre.com.

Dec. 18-27
It’s A Wonderful Life: A Live Radio Play. The beloved American holiday film, adapted for radio broadcast 1940s-style and livestreamed by American Stage. Accompanied by live sound effects, the ensemble brings dozens of characters to life, including our hero, George Bailey, who discovers during one fateful Christmas Eve what the world would be like without him. americanstage.org.

Dec. 26-Jan. 10
The Office!  A Murder Mystery Parody: Who Is The Scranton Strangler? at the Capitol Theatre. This all-new interactive and immersive parody outdoor walking tour will be presented beginning Saturday, December 26 and will continue until Sunday, January 10.  rutheckerdhall.com.

Jan. 13-31
Doubt: A Parable. Jobsite returns to its home base, the Shimberg Playhouse at the Straz, with John Patrick Shanley’s riveting drama about the battle between a Bronx parochial school principal and the priest she suspects of molesting a student. A can’t-miss cast — Roxanne Fay, David Jenkins, Caitlin Eason and  Andresia Moseley, directed by Summer Bohnenkamp — makes this show one to look forward to. jobsitetheater.org.

Jan. 22-24
Gilbert & Sullivan’s The Pirates of Penzance at Opera Tampa. Tender-hearted pirates, bumbling bobbies, blushing maidens and the very model of a modern major general mix it up in rollicking satirical fashion while singing some of W.S. Gilbert’s wittiest patter and Arthur Sullivan’s loveliest melodies. strazcenter.org.

Through February
Stageworks Theatre in Tampa has split its 2020-21 season into three parts, starting with “Digital Content,” with offerings like Singing Telegrams, Zoom Reunions and Stageworks Staycations (including the flat-out hilarious “Take Back My Kids” video starring Alison Burns-Jackson as a locked-down stay-at-home mom). The second part, “Fresh Air,” is a TBA series of outdoor concerts in English and Spanish in December, followed in February by a return to their Channel District home with a revival of the delightful man-meets-dog comedy Sylvia. stageworkstheatre.org.

Dec. 18
Artists Recital Series: Danielle Talamantes in “A Soprano’s Mosaic: Voyage Through Versatility.” This online recital series gives eight of St. Pete Opera’s favorite singers the opportunity to recount their personal journeys through song. Talamantes’s program ranges from Handel’s Messiah to Bizet’s Carmen to Duke Ellington. Other themes in the series include “A Soprano Gone Mad” and “All About That Bass,” and you can either purchase a ticket to a single performance or get all eight for the price of seven; they’ll all be available online until Dec. 31. stpeteopera.org.

MUSEUMS/GALLERIES
Something we might not have considered before: Museums are great for social distancing (unless we’re talking about, say, the Mona Lisa room at the Louvre).

Through Dec. 20
Arts Annual at The Gallery at Creative Pinellas. There’s plenty of room to roam in the CP galleries, and you’ll want to spend lots of time roaming through this exhibit, an exciting survey of work by CP grantees. And, since CP is located in the heart of the Florida Botanical Gardens in Largo, you can cap off your visit with a refreshing outdoor stroll.

Through December 20
“Something 2020” at MIZE Gallery. Chad Mize asked artists to create “a piece based on a positive aspect of 2020″ — a task that must have taken some seriously creative thinking. chadmize.com.

Through Jan. 5
The Borowski Family at Syd Entel Galleries/Susan Benjamin Glass Etc. The Borowskis’ whimsical glass creatures are just one reason to check out this venerable Safety Harbor gallery.

Through Feb. 14
Blake Little: Photographs from the Gay Rodeo at the James Museum. The glorious interior of this Yann Weymouth-designed museum in St. Pete is full of wide open spaces, an apt context for the current special exhibition. thejamesmuseum.org.

Through Mar. 28
Living Color: The Art of the Highwaymen at the Tampa Museum of Art. An exhibition of 60 paintings by the celebrated African American artists who were so in tune with the beauty of Florida’s natural environment.

Through Apr. 11
Van Gogh Alive at the Dalì (pictured at top). This touring show making its North American debut at The Dalì aims to convey the quivery, invigorating impact of Vincent Van Gogh’s artistry via an immersive art experience featuring more than 3,000 images at enormous scale, viewed through high-definition projectors and synchronized to a classical score. thedali.org.

Ongoing
A new look at the Museum of Fine Arts in St. Pete. You know how, when you’ve been away from home for a long time, everything looks different when you return? That’s what it’s like seeing the revamp of the Museum of Fine Arts’ original 1965 galleries. Except it’s not your eyes deceiving you; the galleries, which reopened to the general public in October, really are different. Closed since the spring because of the pandemic, they’ve been rethought, reorganized, repainted and completely refreshed. Chances are a visitor’s own understanding of the collection — and of art history, for that matter — will be refreshed, too. mfastpete.org.

Judging by the plummeting attendance figures at major chains, the public hasn’t quite taken to the idea of hitting the multiplex just yet. But how about trying a small art house instead? Green Light Cinema in downtown St. Pete is filling the gap for discerning moviegoers with screenings of smaller, buzzy films like Ammonite, Sound of Metal and Jimmy Carter: Rock and Roll President, with social distancing solidly in place. Tickets and showtimes at greenlightstpete.com.

And if you’d rather watch your movies at home, Tampa Theatre offers a stellar and ever-expanding lineup of arthouse theatrical exclusives not available on other streaming platforms — festival award-winners like Martin Eden, suspensers like The Informer, the latest documentary from Frederick Wiseman, City Hall — and you can can watch ’em all at tampatheatre.org while popping your own popcorn.