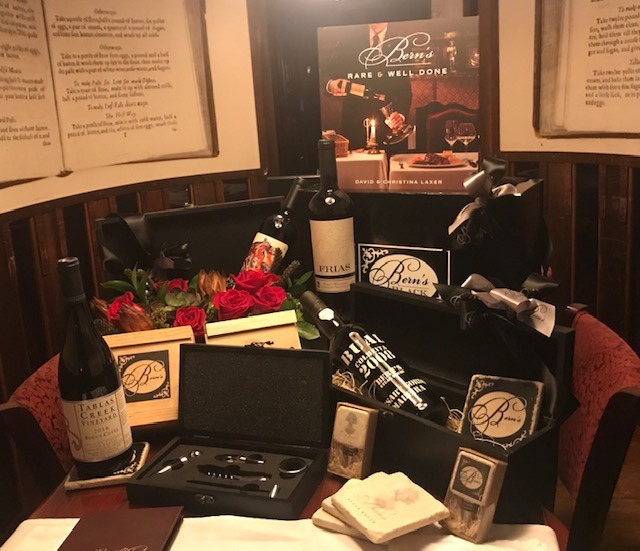 A sampling of the surprises that might appear in your Bern's Black Box.
Food & Drink Gift Guide Wine

Bern’s Black Box is to wine as Tiffany’s blue box is to jewelry.

Combine it with an evening at Harry Waugh Dessert Room — with the Black Box delivered tableside — and you’ve got the makings of the ultimate VIP experience.

Or perhaps the perfect holiday surprise.

Let me backtrack a bit to the history behind this splendid gift idea — which of course has its roots in the iconic Tampa restaurant Bern’s Steak House.

The restaurant, world-renowned for its steaks and wine collection, was born out of Bern Laxer’s desire to create a memorable food and wine experience for his customers.

That same philosophy inspired him to develop the Harry Waugh Dessert Room as a unique place to linger and savor rare wines, expensive cordials and delectable desserts after dinner.

More than 20 years ago, when I was living in a condo on Bayshore, I would venture down to Bern’s and walk through the famous steakhouse, where the movers and shakers of Tampa would dine. I would make my way up the wooden staircase to a magical place unlike any other venue I had ever been to before: Bern’s Harry Waugh Dessert Room.

At the time I was exploring different varieties of wines, and this dessert room allowed me the opportunity to experiment with wine and learn all about port, as the educated servers bantered with me about spirits and cordials. With 42 pages of dessert drink choices it was not merely a menu to explore; it was a book of options that took my passion for wine to a whole new level.

Whenever I would go I would either sit in one of their private wine barrels, where a closed-circuit sound system allowed me to choose my own musical selections, or I would sit in the piano room where live music would be playing.

Everyone in Tampa probably has their own memory of Bern’s Steak House that they can share. Or they have family traditions or special occasions that they always celebrate at Bern’s.

I hadn’t been to Bern’s since I moved back to Tampa and I wanted to see if it was still as magical as I remember. Since it’s tucked away above the restaurant, I kept forgetting that it was there to enjoy.

[ngg src=”galleries” ids=”56″ display=”basic_thumbnail” thumbnail_crop=”0″]When I reached out to Bern’s to talk about visiting their Dessert Room, I discovered that they had created something new to add another dimension to an already memorable epicurean experience. In learning about Bern’s Black Box, I knew I needed to see it for myself.

When I arrived at the top of the stairs at Bern’s, Cassandra Abel was there to guide us through our experience. Cassandra is heading up the Black Box Signature Program for Christina Laxer, who developed the idea after constant requests from Bern’s customers to be able to leave the restaurant with a special gift to commemorate the memory, or to send a special product from the Bern’s family as a gift.

As we sat down in our private wine barrel room, there were two special Bern’s cappuccinos waiting at our table. My friend Peggy has lived in Tampa for many years and had never been to the Dessert Room, so I was able to get insight from someone seeing it for the first time.

As we sipped on our cappuccinos, Cassie introduced us to Dessert Room Manager Felix Malinowski, who told us that Bern Laxer opened the Harry Waugh Dessert Room in 1985 and created the Wine Barrel rooms from California redwood, which was sent from wineries with which the restaurant had built relationships over the years. There are also larger private rooms called Champagne and Port that can hold up to 40 people for a party or event.

Cassandra then took me to a larger Wine Barrel room — this one seated six people — to show me a display of some of the fabulous items that can go into a Black Box: Bern’s Select bottles of wine, beautiful red roses, the Bern’s Rare and Well Done coffee table book, coasters, and wine accessories.

It was like looking at Christmas presents being displayed under the tree, each one more interesting than the other, from the Bern’s family to yours.

Being a wine enthusiast myself, I wanted to learn more about the wines that they had chosen and the options available, as well as how many bottles of wine they really did have in their wine cellar. They are known to have the largest private collection in the world.

Cassandra brought over Director of Spirits Nathaniel Wilson  to quench my thirst for knowledge.  He talked about the Bern’s specialty bottles of Chateau St. Michelle Cabernet; the Bern’s Cuvee Tablas Creek, which is from the Paso Robles Region; the Frias Cabernet Sauvignon; and a 2008 Blandy’s Madeira that immediately grabbed my attention.

Having a love for aged tawny port, I wanted to taste the Blandy’s Cosset Gordon to understand this Bern’s Select. The private label says that it comes from Portugal and was aged for nine years in a single oak cask and then bottled in 2018. But Nate explained that it’s actually from the island of Madeira near Portugal, which makes it more unique. It smells like a tawny but with a touch of sweetness and has a crisp taste versus the smoothness of tawny port.

Which transported me back to my love of the perfect dessert pairing: a glass of port and Bananas Foster, prepared as a flambé table side — a heavenly combination of caramelized sauce made with banana liqueur, rum and brandy, served over bananas and vanilla bean ice cream.

Upon hearing about my favorites, Nate had April, our server, prepare a Bananas Foster dessert for us, and he brought us a Warres 1970 Vintage Tawny Port to accompany it, which was amazingly smooth.

They also sent to our table their macadamia nut ice cream, which is one of the Dessert Room’s signature recipes — it took seven years of experimenting to reach perfection — and their banana cream pie, which has been on the dessert menu in the Steak House since 1956.

He also explained that a Bern’s Black Box can come with whiskey instead of wine, and there are several Bern’s Select Whiskeys to choose from, such as Dickel, Makers Mark and 4 Roses in a specialty Bern’s bottle.

If you are a passionate wine drinker, as I am, this is the ideal holiday gift.  It is special, unique and luxurious.

The Black Box, filled with luxurious gifts, can also be ordered and picked up at the Bern’s Fine Wines and Spirits retail location in the Epicurean Hotel, or it can be personally couriered to a house or office.

If you are interested in a gift that is not wine or whiskey, the Bern’s Rare and Well Done book is one of the finest coffee table books I have seen in a long time, especially since it has Tampa history woven throughout. The book can be personally signed by the Laxer family and go into a Black Box with roses, or a set of Bern’s coasters.

If you are a foodie, a wine enthusiast, or someone who has lived in the Tampa area for a while it is a must-read. When I opened it up and started reading, I couldn’t put it down.  Plus, when you purchase Rare and Well Done, a percentage of your purchase price benefits the Bern Laxer Culinary Scholarship awarded by the James Beard Foundation.

Each high-gloss Black Box is beautifully wrapped with a Bern’s satin ribbon and bow and can be accompanied by a personalized note on Bern’s letterhead if desired. You can order online at www.bernsfinewines.com/Black-Box/Step-1–Box-Size or speak to Cassandra Abel about Bern’s personal concierge service or tableside presentation at 813-490-6633.