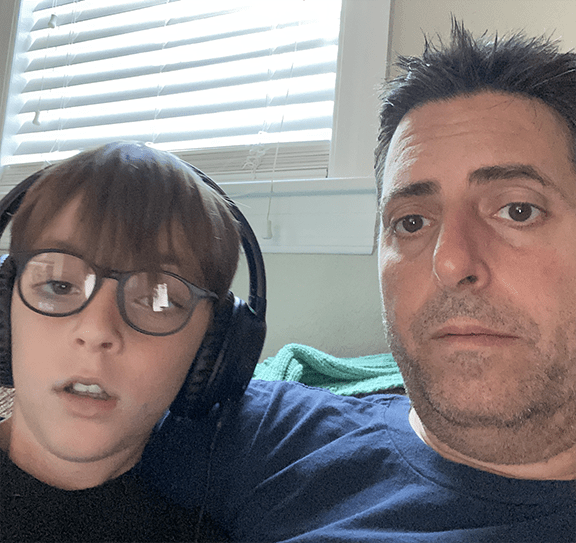 Confessions of a First-Time Stay-at-Home Dad: It All Comes Crashing Down

Editor’s Note: Joe Bardi — writer, editor, musician, husband, father — has always been a busy man. But until recently it had been up to his wife, freelance writer/photographer and frequent dRTB contributor Heidi Kurpiela, to handle the bulk of weekday parenting chores, because she could work from home and he had an office job. Then the pandemic hit. The following post is the first installment in “The Quarantine Diaries,” a series about the double whammy of suddenly being both unemployed and a 24-hour stay-at-home dad.

It was a Monday. My two sons — 8-year-old Henry and 4-year-old Chip — were on their first day of spring break, but my wife Heidi and I were already kicking around the idea that they were going to be home for more than seven days. Maybe it wasn’t a good idea to volunteer to take care of the class bearded dragon during the vacation? Too late, and besides, class pets are really more my wife’s domain. I was headed into work, where I was the communications director for a software company with offices in downtown St. Pete. I’d find some normalcy there.

I didn’t, of course. St. Petersburg was already ghosting hard. I knew we were in trouble when I spied numerous vacant parking spots right next to my building, First Central Tower in the heart of downtown. Once inside, I spent the morning at my desk trying to plan — What should our social media response be? Are we really putting all these press releases on hold? — while mostly reading the news and obsessively washing my hands. My boss called, we chatted, and it was decided I would take a few days off while she figured out what we were going to do as a marketing department.

That would be my last day in the office. Two days later (while still on “vacation”) I had a moment of clarity and freaked out hard. The Corona Crisis had been gathering for weeks. Now it was here, and I just knew I was about to get fired. I frantically texted and Slacked my supervisor of four years looking for some encouraging words. They were not forthcoming. On Thursday, March 19, I was officially laid off, along with about half of the company’s St. Petersburg office. After working continuously since late 2004 (including every day of the Great Recession), I was suddenly without a job.

Don’t fret. It was a mercy killing.

I honestly have no idea how you folks still-employed at non-essential businesses are balancing working from home with the demands of family and the general anxiety that comes from living through a global pandemic. (Never mind the essential workers. I have NO idea how they do it.) I would have been a disaster. Working from home with kids is a challenge during normal times — but at least you have the school day as a daily respite to cram assignments into. Now the kids are up our butts every waking second. (For example: I just had to stop writing this paragraph twice to break up a brewing fight over a giant, plush DJ Kitty head.)

It was also the strangest leaving of a job I’ve ever experienced. The bottom line: I would have fired me, too.  I was ready for a change anyway — even if I didn’t have much of a plan. I understood this upheaval would be a positive in my life, even if it brought massive uncertainty with it.

Besides, I had plenty to keep me busy in the short term. I’d be applying for unemployment. I was keeping my fingers crossed that Uncle Sam was soon to dump some “stimulus” money on me. But mostly I was refocusing my attention from professional communications specialist to kidded-up stay-at-home dad.

Turns out that’s a communications job, too. I was just the last to figure it out.

Part Three: War with the Machines

Part Six: How to Visit Grandma’s House in the Time of Coronavirus

Part Eight: My Wife Is a Superhero (and I’m Making Music)

UPDATE: The president of the U.S. Travel Association, Roger Dow, on the document he sent the White House