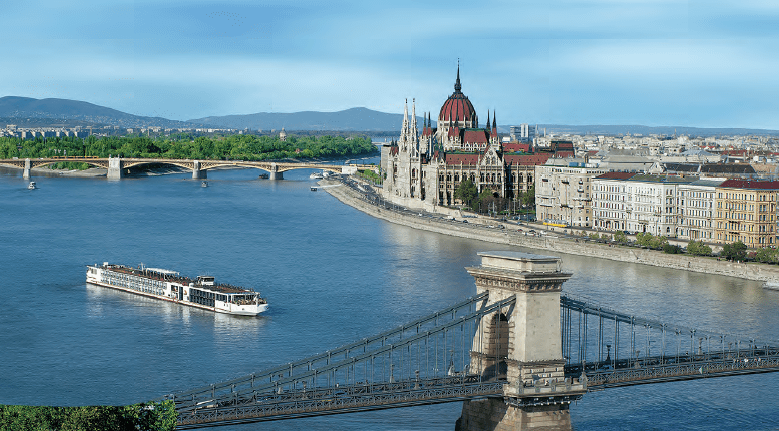 Cruise Around Europe More Popular Than Ever with Tampa Residents

The After touring Budapest’s architecture, public art and food scene for a full week, I boarded the Viking Egil Cruise hesitantly. Would a thin ship be a comfy home for seven days? And, is one morning and afternoon apiece enough for visiting the Austrian and German destinations on the itinerary?

Yes and yes, I learned. By traversing the Danube River one port at a time, I was able to get a true feel for several destinations – both landmark attractions and the quirky finds hidden away near the headliners. Lodging on the “longship” throughout the trip provided a pampering home base with every American comfort at the ready.

All of Viking’s 40-plus longships cruise are identical, with a light, bright decor that is at once deluxe and understated. Taupes, tans and light woods pervade from the lobby to the staterooms to the public spaces, always with a dash of indulgence. Despite their Scandinavian grace, the boats have amenities Americans want: strong hot showers, 110 volt outlets, heated bathroom floors, bedside and reading lights, filtered drinking water, large bottles of toiletries, and hot beverages and sweet snacks available 24/7. In addition to creative meals and regional specialties, the dining room always offers simple alternatives like steak-and-fries.

The cruise ship is designed for panoramic. Whether the vessel is docked or moving, passengers can sit in the expansive lounge lined with picture windows, or on the equally generous deck and take in the views: picturesque pastoral communities, scenic natural areas and more. It’s always easy to get a front-row seat indoors and out. Occasionally the ship will go through a lock in the canal; curiosity seekers gather up top to watch as the water rises.

Each morning, the cruise ship brings the 190 passengers to a new destination. Once the doors open, bilingual tour guides are at the ready for complimentary excursions, generally a 90-minute to four-hour walk, often with a bus component. Guests are divided into small groups so they can easily stay together and hear the information shared; special “gizmos” with ear pieces for audio to allow the experts to speak calmly without shouting, and listeners to hear them with ease.

On our cruise itinerary, one of six available on the Danube, Viking brought passengers on a half-day Budapest tour, showing them highlights of this vibrant modern city with a deeply painful past. Participants got to explore the hilltop castle community in Buda and views of the city’s striking parallel bridges, along with highlights of Pest across the river, including the elegant Andrassy Avenue. Those who preferred to explore independently might have sought out memorable stops such as the numerous bronze sculptures along Danube Promenade; the one called Shoes is most memorable, as it’s a tribute to World War II victims pushed into the river from that spot. On a happier note, the Parliament building and the Hungarian State Opera House are impressively ornate historic structures.

Rather than enjoy the cruise ship’s ample meals, travelers may have grabbed a Hungarian langos open-faced sandwich and a sweet chimney cake dessert at the Caravan Outdoor Food Hall, then headed to a Ruin Bar – a pub set up within a bombed-out building – for a drink. Since I’d already seen Budapest, the Egil’s staff arranged for a private jaunt to Szentendre, a Hungarian-Serbian community from the 1500s loaded with artisan wares vended along narrow cobblestone streets.

Once we set sail, our itinerary began with Vienna, the sophisticated Austrian cultural center known for waltzes, royalty, cafés and a frescoed opera concert hall. A bus brought us to see the Ringstrasse urban core, with fanciful white buildings that house palaces and residences. Then, those of us who opted for no additional excursion, dispersed to museums, historical sites and modern galleries or, in my case, to the Naschmarkt food market. There, more than 100 vendors hawk foodstuffs and snacks, as they have since 1774; the current version has been around for 100+ years, selling temptations from stuffed olives to the famous Viennese chocolate cake Sachertorte.

After all that urban immersion, Göttweig Abbey in the Wachau Valley, the next day’s stop, was short and sweet. The 900-year-old baroque Benedictine Abbey is home to a few dozen monks and is known for a frescoed ceiling and a massive library. It is surrounded by vineyards and apricot plantings.

Day 4’s port was Passau, a Bavarian hub with pastel buildings and a 17th-century church boasting Europe’s largest pipe organ. I instead headed to Salzburg, where a guide brought The Sound of Music to life, explaining the Von Trapp family’s ties to the city streets where we walked. We were treated to a festive lunch at the country’s oldest restaurant, where upbeat operatic singers performed popular songs from the movie soundtrack.

The quiet Bavarian city of Regensburg was especially enchanting. It’s a college town and Medieval city with a checkered past and a lively retail and dining scene. After an introductory tour that highlighted a troubling Jewish history, we spent the day window shopping for hand-crafted products. For a typical treat, we stopped into the timeless Dampfnudel-Uli, a memorabilia-filled restaurant in a former chapel at the base of the 1270 Patrician-style Baumburger Tower. Nearly every customer had the same food order: a plateful of just-sweet steamed dumplings topped with a custardy vanilla sauce.

Nuremberg was our final stop, and like the other destinations it proved to be a thriving contemporary destination filled with somber reminders of last century’s wars. Thanks to the Viking tour, we drove by a stadium where grand Nazi rallies were held, and a half-built coliseum that was meant to rival Rome’s, before walking around the Imperial Palace. As it rebuilds, Nuremberg has replicated the architecture of buildings that were destroyed, meaning the Medieval flavor remains intact despite the city’s modernity. Free to explore, we learned about the work of artist Albrecht Dürer in his one-time home. Souvenir shopping in Market Square was simple: the Lebkuchen spice cookies, a Christmas tradition, are sold everywhere.

With all this exploring, still we found ourselves unwinding back on the Egil each evening. We gathered in the lounge as the crew shared the next day’s itinerary, then proceeded to the dining room for a three-course dinner with wine and beer included. We often meandered back to the lounge after dessert. There, a piano player entertained as we socialized over board games or participated in special events like German lessons.

I toured every chance possible, yet some fellow guests stayed on the Egil often, relaxing in a hotel-like setting. Essentially, we all created the vacation that was right for us.