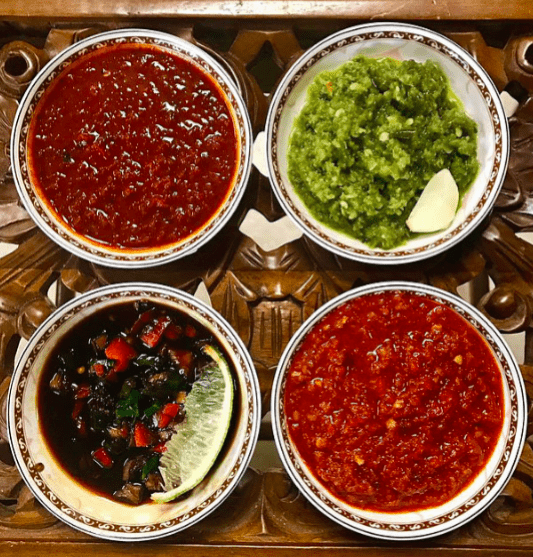 An assortment of Indonesian sambals at Hardena.
Food & Drink Travel

Philadelphia has lately been lauded for a restaurant renaissance, but locals will tell you: It’s always been this good. The city’s distinct neighborhoods and ethnic enclaves pulse with a tapestry of diverse cuisines that transcend threadbare labels like “fusion” and “New American.” It’s a uniquely American experience of food, where $10 Vietnamese Pho sits alongside top-rated restaurants on any Philly foodie’s must-go list. Here are just a few.

Hardena: Indonesian dishes in a tiny spot with gourmet cred

Off a small side street in the Newbold neighborhood you’ll find this traditional Indonesian restaurant, a street cart-sized room tightly packed with seat-yourself tables. Don’t let the casual cafeteria-style atmosphere fool you; the Widjojo family chefs earned James Beard semi-finalist nominations for their amazing fare. The beef rendang, a traditional Indonesian curry stew with a decent amount of spice, and the sayur lodeh (silky smooth collard greens in coconut milk) are not to be missed. Spice up any dish with one of the four assertive sambals (hot sauces with shrimp paste and herbs, green chili garlic, spicy sweet soy sauce or red pepper hot sauce), and you are set. The place is an accessible two-block walk from the Broad Street Line subway stop that runs north-south through the entire city. Hardena/Warung Surabaya. 1754 South Hicks Street, Philadelphia, 215-271-9442, 11:30 a.m.-8:30 p.m., closed Tuesdays. www.hardenaphilly.com/restaurant

After the success of Kanella’s Cypriot-inspired menu, and the internationally recognized Israeli cuisine from Zahav, this all-day Lebanese cafe completes the trifecta of Levantine cuisine in Philadelphia. During the day, stop by their market for rose crullers and cardamom kouign amann; take in the daylight-drenched atmosphere while you order a casual but tasty kofta kebab. By night, Suraya ups the ante, offering a menu of traditional dishes served with finesse, alongside arak-inspired cocktails that delicately blend the aniseed liquor with a balance of ingredients like bourbon, apricot, and cardamom. Suraya also offers an extensive list of Lebanese wines. Suraya. 1528 Frankford Ave., Philadelphia, 215-302-1900. Closed Mondays. Market hours 7 a.m.-5 p.m., Dinner hours 5 p.m.-10 p.m. Tu-Th, Sun, and 5 p.m.-11 p.m. Fri/Sat (bar open late) www.surayaphilly.com

On a quiet block in Queen Village hangs a red lantern with Japanese symbols, next to a nondescript blue door. This is the unassuming entrance of Royal Izakaya, which opens to a dark, rich dining room with plenty of bar and counter space, gastropub style booths,  a killer playlist, and Japanese anime projected onto the wall. The menu offers small and unusual bar snacks, meant for sharing as you sample the selection of sakes and sochu, in typical izakya style. This is the place to experience Japanese bar culture, and yes, there is sushi. For those yearning for a more formal experience, just head past the pub to the quiet back room where groups of 8 can take a seat at the sushi counter and observe chef Jesse Ito serve his rarified omakase tastings. These seatings are fixed price for the lucky few able to nab a reservation. Royal Izakaya. 780 S. 2nd St., Philadelphia, 267-909-9002. 5 p.m.-2 a.m. 7 days/week, kitchen until 1 a.m. royalsushiandizakaya.com

You could wait in line for brunch at one of Philadelphia’s delicious but often overcrowded eateries, or you could quickly find an open spot at this no-frills restaurant with arguably the best pho  in Philadelphia, along with sweet, strong Vietnamese coffee. Located at 6th and Washington, Pho Ha opens at 9 a.m. and can feed you for a cool $8.50. As unique a Philadelphia brunch as any restaurant has to offer, Pho Ha will get you fueled up and on your way to enjoy sights and sounds in a fraction of the time. Pho Ha. 600 Washington Ave., Philadelphia, 215-599-0264. Sun-Th 9 a.m.-9 p.m., Fri/Sat 9 a.m.-9:30 p.m. No website.

This iconic restaurant’s first iteration came in the midst of Philadelphia’s first highly touted restaurant renaissance, over 42 years ago. Alas, by 2015 it had fallen out of favor as a Philly food staple, its cuisine and decor regarded as retro by younger clientele, and not in the ironic sense of the word. Enter Chad and Hannah Williams. Taking a big risk, considering the neighborhood nostalgia that weighed so heavily on the space, this husband and wife team’s first action as owners was to completely transform it, inside and out. Nevertheless, they’ve managed to keep the original spirit alive, while also updating the menu to reflect the nuances of modern food in Philadelphia. This place may be the one exception that proves the rule as its evolution, its fare and its atmosphere represent what “New American Cuisine” should be. Come for dinner and arrive early to indulge in one of bartender Paul MacDonald’s inventive cocktails paired with appetite-whetting day-boat oysters for a truly new and modern American fine dining experience. Friday Saturday Sunday. 261 S. 21st St., Philadelphia, 215-546-4232. Closed Mondays. Bar: Tues-Sun, 3 p.m.-1 a.m.; Kitchen: Tues-Thur, Sun. 5 p.m.-10 p.m.; Fri/Sat 5 p.m.-11 p.m. www.fridaysaturdaysunday.com

The A to Z Ultimate Luxury Lifestyles List: A is for… Automobiles