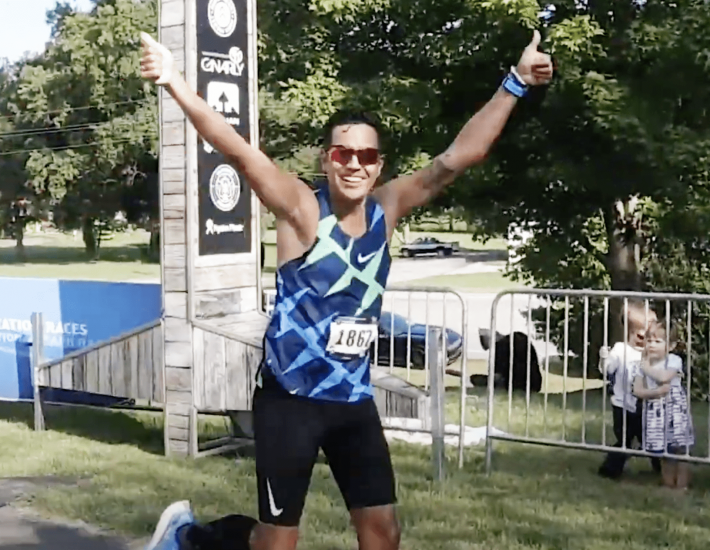 For runners, qualifying for the Boston Marathon is like finding the Holy Grail. There are people who train for years to get fast enough to get the honor, but every year, qualifying times get even harder to achieve. So obviously, when Daniel got a chance to run it, he was as happy as a little kid on Christmas morning. Then, the COVID pandemic happened, and the race was postponed — then canceled. But since runners are a stubborn group, the Boston Athletic Association offered the option to run it virtually. And Daniel embraced the opportunity to do so.

Twenty years ago, Daniel was diagnosed with a rare form of colon cancer and underwent multiple surgeries. Thankfully, the doctors were able to get it all and Daniel is now a cancer survivor. The fact that he’s alive — and a healthy marathoner — is nothing short of a miracle. So he decided that to celebrate the 20th anniversary of his remission, he would run the Boston, Chicago, and New York City marathons virtually while raising money for the American Cancer Society.

But where do you run a virtual marathon?

The easiest way to do a virtual is to run it in a local park or somewhere you’re familiar with. But, since we’re living on the road, that’s a little more difficult.

Despite there being very few in-person races, Daniel got lucky and found a real-life, in-person half marathon going on in the Smoky Mountains in Tennessee! And since we have an Airstream, we decided to get there as quickly as possible to run his Boston virtual at a real race course.

Seven hundred miles later, we made it to the Smoky Mountains the day before race day. However, once we arrived, we had no time to decompress from the long drive. We set up the RV at our campsite and headed to bib pickup.

Our plan was simple — start running way before the race start time, with the finish line as Daniel’s start line. Then, he’d run all the way back with the rest of the runners once the Smoky Mountains Half Marathon started. Easy peasy.

But first, there’s coffee. We went to The Artistic Bean in Townsend, TN. The place is pretty wonderful, since they roast and brew their own organic coffee. Also, it was perfect, since not only were we tired from the road trip, but I also signed up to run a 5K that same night. Once the caffeine hit, I decided on the spot to rent a bike so that I could follow Daniel on his 26.2-mile adventure the following morning, too. I had never ridden that distance before in my life, but how hard could it be?

Something that’s really cool is that race day was also Daniel’s birthday. So he was extra excited. We got up at 4:30 AM and got ready to get the party started. We got there at zero dark thirty to start the race. We had to wear headlamps to see in the pitch darkness — and I’m not exaggerating. Without them, we wouldn’t have been able to see anything at all. But when the sun came up, y’all, those views were gorgeous!

My husband ran like a champ at impressive paces. And in true Daniel fashion, he’d get excited and say things like: “Fourteen miles to go!” as pumped as if he had a winning lottery ticket. But, the second half of the race was mostly uphill. I’m not gonna give you too many details of that struggle because I want to keep you in suspense. But I’ll tell you this much. I was ready to be done, and I was riding a bike. But hey, he made it to the finish line! It only took over four hours of running and lots of mental fortitude.

Watch for yourself as Daniel runs the Boston Marathon in Tennessee, and subscribe to our YouTube channel, Wanderlocal, so you don’t miss a single episode of this adventure!

Author Bio
Lauren Davenport is the CEO of healthcare communications firm, The Symphony Agency, providing technology and marketing solutions to help healthcare practices grow fast and efficiently. She’s been featured in Forbes and local magazines, showcasing her experiences as a small business owner. Daniel Fernandez is the Chief Experience Officer at the Symphony Agency and host of The Healthcare CEO podcast.

Got you covered: The 8 top-rated sunscreens