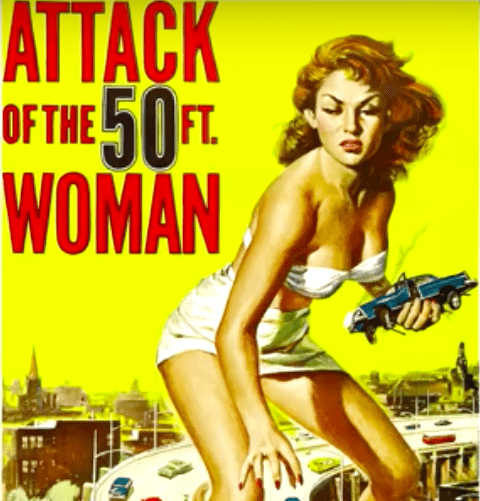 Shameless Self-Promotion Dept.: Tonight’s edition of the Radio Theatre Project at the Studio@620 includes an adaptation of the classic terrible B-movie Attack of the 50-Ft. Woman, and I’m playing the 50-Ft. Woman’s two-timing husband (which, as you might imagine, is not the safest thing to be). The fabulous Eugenie Bondurant (who’s not 50 feet, but she is kinda tall) plays the title role, and RTP’s crackerjack acting ensemble fills out the rest of the cast in an adaptation by Mack Hays that recreates the HORROR, SHOCK  and FRENZY (to paraphrase 1958 movie trailers) but adds comic touches that, this time around, are intentional. And wait till you hear how sound whiz Matt Cowley brings the giant clomping footsteps and alien spaceships.

Also on the program: “Elephant in the Room,” a tête-à-tête between a woman and her bathroom scale by former Tampa Bay Times food editor Janet Keeler, and Patti Cassidy’s “Litany, A Radio Play,” in which a scholarly woman copes with her aging memory and a generational divide.

Note: While you’re at the Studio, check out the exhibition Midtown Through Our Eyes, photos and stories by students in the K-12 Journeys in Journalism Program.