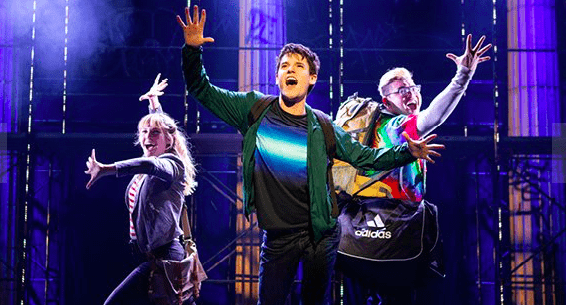 Hamilton was so popular the Straz held a ticket lottery. Evan Hansen, too. But The Lightning Thief: The Percy Jackson Musical? Yep. Beginning two and a half hours before each performance from today through the end of the run on the 14th, you can enter a lottery to win one or two $20 tickets to the show at the Straz box office, where entry cards will be distributed and names will be drawn at random for a limited number of tickets, two hours before curtain. (One entry/two tickets per person limit, don’t be greedy.)

So why has this Off-Broadway musical attracted the kind of interest stirred up by better-known Broadway tours? I can’t say, having not seen it nor read the best-selling YA book on which it was based, but judging by the synopsis I can take a guess: If I were a tween-aged reader, I suspect I’d have adored the idea that I might actually be a demigod, that my math teacher was actually an evil monster, that summer camp isn’t hell on earth but a place where I can pal around with other demigods, and that I can actually go to hell, or rather Hades, rescue my mom, retrieve a stolen lightning bolt and return it to dad, aka Poseidon.

I mean, that sounds a lot better than junior high, right? Plus, it’s got a cute cast, a rockin’ score, and the lottery tickets for that Harry Potter show on Broadway cost $40!