Editor’s Note: Giving Tuesdays, Registry Tampa Bay‘s weekly column on charity events and charitable people, focuses on opportunities to give and on those for whom giving is a way of life. Recent news of major gifts — $25 million for the Tampa Museum of Art expansion from Dick and Cornelia “Cornie” Corbett and $5 million for the USF football stadium project from Frank and Carol Morsani — reminded us of past duPont Registry Tampa Bay stories about these generous philanthropists. Two weeks ago, we revisited a 2020 profile of Cornie Corbett, and this week we look back even further in our files to bring you Katherine Ferrara’s insightful 2017 portrait of Frank Morsani.

An entire generation lives in a community where the Morsani name is etched in Tampa Bay’s history. For many of these organizations, the programs and initiatives that are thriving today might not have taken flight without the generous support of Frank and Carol Morsani.

Morsani, a successful Tampa auto dealer and retired chairman of the Automotive Investments, Inc. company, has been an ardent philanthropist for more than two decades. Giving back to the community has been a paramount discipline for the couple, who has bequeathed tens of millions of dollars to various arts, education, and healthcare organizations, including the University of South Florida, the David A. Straz Jr. Center for the Performing Arts, the Tampa Museum of Art, and the Moffitt Cancer Center. The couple has also generously donated to Oklahoma State University, which is Frank’s alma mater. 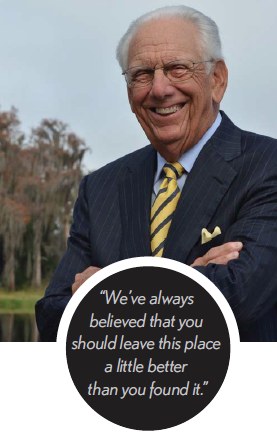 When you ask Morsani about his motivation to become a benefactor of so much to so many, he modestly says, “We’ve always believed that you should leave this place a little better than you found it.”

This generosity from a man whose storied life depicted some of life’s biggest hardships and adversity. As a young boy growing up in Arkansas, his family lived in poverty during the Great Depression. He met Carol in high school, and after taking her to prom, they married a year later. After serving in the U.S. Navy during the Korean War, Morsani worked as a master car mechanic for Ford Motor Co. In 1970, a Mercedes-Benz dealer sought Morsani’s help, and Morsani moved his wife and two daughters to Tampa. A year later, he bought the business from the dealer’s widow, the first of 30car dealerships he would own across the country.

He detailed his climb to achieving the American dream in a memoir published in 2015 titled, To Be Frank: Building the American Dream in Business and Life. “We wanted to inspire people on the importance of overcoming adversity. Everyone has adversity in life. You need to buckle your seat belt and move on,” he says.

The Morsanis embraced their new hometown and became active on several boards of directors. The couple pursued personal causes; Carol studied interior design in college and fostered her love of the visual arts. The couple’s first major gift was to the David A. Straz Jr.Center for the Performing Arts, adding the Carol Morsani Hall, an arts program in its infancy at the time.

Frank Morsani pursued higher education, with positions on the USF Foundation Board of Trustees and past vice chairman of the board. The Morsani’s have supported the college’s athletic programs, donating nearly $4.5 million to build the football program and fund the construction of the Athletics Training Center. The couple have also supported research at the USF Health Center for the Advanced Healthcare and the Moffitt Cancer Center. Morsani is optimistic about the next generation of philanthropists, saying everyone can find ways to make a difference by taking ownership.

“Young people who grow up and go to school here need to get involved and create long-term commitments to foster their philanthropic ideas,” he says.

He continues to share his business acumen that made the Morsani name synonymous with successful leadership, volunteering as a mentor with Pasco-Hernando SCORE, an organization that matches retired executives with local small business owners. In a candid moment, Morsani says he’s also playing golf, something he didn’t think he could take time off for when he was working.

“Since I sold my last company, I don’t go to the office every day, but my wife agreed to for better or worse, but not for lunch,” he laughs. “I don’t do anything every day!”