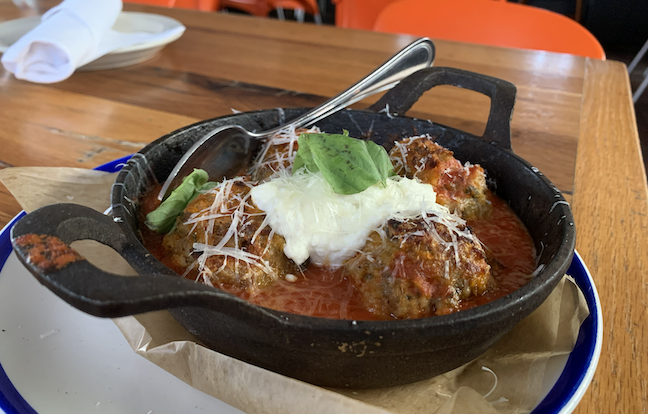 Noble Crust and Taverna Costale square off to see which makes the best meatballs — as an appetizer, no pasta or roll allowed.

I’d love to know how many meatballs I’ve consumed during my baby-boomer lifetime. I wouldn’t be surprised if it reached well into five figures. I started young, most certainly in the highchair, and — like so many suburban kids of my generation — grew up on a steady diet of spaghetti and meatballs.

Even better: Mom excelled at making those sauce-covered orbs. Nothing fancy — ground beef rolled together with bread crumbs and egg. (That’s the extent of my knowledge of the process.) I’m fortunate enough that my wife, Bonnie, takes the same approach. None of this is meant to set me up as an expert on meatballs, but I’m no bum either.

For this Friday Food Fight, we’re going to taste-test meatballs — not with pasta and not in a roll, but meatballs as appetizers. Meatballs for meatballs sake, no distractions.

Our contestants: “Meatballs” at Noble Crust in northeast St. Pete, and “Fabio’s Famous Meatballs,” at Taverna Costale in downtown St. Pete. Uh oh, can this even be a fair fight? Is this gonna be like a YMCA baller vs. Kevin Durant?

We sat in the covered porch section, enclosed by filmy plastic. It was happy hour, and the modern-rock coming out of the speakers was not only heinous, but way too loud. Sorry, but my long career as a music critic does not permit me to let music crimes go unpunished.

Our waiter was efficient and friendly, but not too friendly. The kitchen was fast, which is what we wanted on a Wednesday at 4 p.m. We paired the Meatballs with the Caesar salad, which used to be called the Kale Caesar. I like the old name better. Sounds more Noble, no? I can’t recommend this salad enough, even with its new generic name. (The soft-boiled egg that oozes yoke all over is the X-factor ingredient.) But enough about salad … onto meat-a-ballz.

Four Meatballs came cozied together in a small, cast-iron crock, peaking out of a red sauce. A healthy dollop of whipped ricotta rested in the middle, and some shavings of parmesan cheese and a few basil leaves capped it off. A very nice presentation.

All that was missing were the pieces of toast that we’d seen in a photo online. Our waiter told us that the bread component had been discontinued a few months earlier. Inflation, I guess. I recommend reinstating the toast — unless, of course, most of it ended up getting thrown out. I can guarantee that no bread from my serving would end up in the trash. Unless they brought a whole loaf.

I quickly developed a technique for eating these Meatballs. Fork-cut and stab a good-sized chunk, lather it up with the red sauce, drag it through the ricotta, open mouth, insert, you know the rest. Delicious. The sauce was just the right medium consistency, tasty but not fussy — a backup singer to the main act, as it should be.

The ricotta was the lead guitarist — with serious chops. We loved it. The cheese blended with the sauce to make a heavenly concoction.

The meatballs themselves were more rustic than smooth, with an outer “shell” that gave way to more tender (but still somewhat coarse) innards. If I’m picking nits, these ‘balls pushed the pork out front a bit too much — for me, at least. But mixed with the beef, the pork gave them a kind of farmhouse flavor.

The four meatballs could easily be a meal, and with the salad they made a hearty early dinner for two. After we polished off the meat orbs, there was a some sauce-ricotta blend lying there — lonely, neglected.

This is where some bread would’ve been nice. But no problem, I scooped it up with the spoon and shoveled it in.

I did not, however, pick up the crock and lick it clean. I would’ve liked to, of for no other reason to beam me back to my highchair days.

We went Thursday at 5 to this trendy restaurant in downtown St. Pete. The indoor crowd was light, but the outdoor bar was bustling. We grabbed a seat inside, because sweating profusely in ninety-something-degree weather tends to put a damper on my appetite. Taverna Costale is a highly professional operation. The hosts are consistently upbeat, as are the servers, who have extensive product knowledge, right down the how hoppy a particular draft beer is.

Toast. That’s the first thing I noticed. Two pieces proudly jutting upward from the sauce that was swimming in an elegant white bowl. (I must tell you that these hunks of bread were not nearly as gigantic as the above photo makes them look, but they were definitely substantial.) The four meatballs were more buried in the sauce than the ones at Noble Crust, which ultimately meant … more sauce. Costale gets points for that.

However, Noble Crust gets the nod for being more generous with the whipped ricotta. That sublime blend of sauce and cheese that I mentioned above did not quite land here.

These meatballs were more like mama used t’make. Ground beef, no pork. Fabio’s were a bit larger, more tender and moist, no shell. In a word, fantastic. Damn! No wonder they’re famous! As a kid who grew up on meatballs, I appreciated the elegant simplicity of this version. The sauce had character, but didn’t interfere, just enhanced the overall taste. I would have preferred a bit more ricotta, but that’s a nit I won’t even bother to pick.

The bread was rustic and chewy, adding some crunch to a smooth dish. There was no spoon, so once the bread was gone, the smears of remaining sauce laid there, abandoned. I considered using a knife to scrape out the remaining sauce, but I’ve heard somewhere that eating tomato sauce with a knife in a fine-dining establishment is frowned upon.

The winner of the Friday Food Fight Meatball Mega-Battle is:

I enjoyed both versions, and laid waste to them with shark-like efficiency, but ultimately the more traditional approach won out.

Weekend Top 10: A THUNDER AND LIGHTNING STORM IS COMING

beeMAIL: This weeks’s beeMAIL is in the bag.