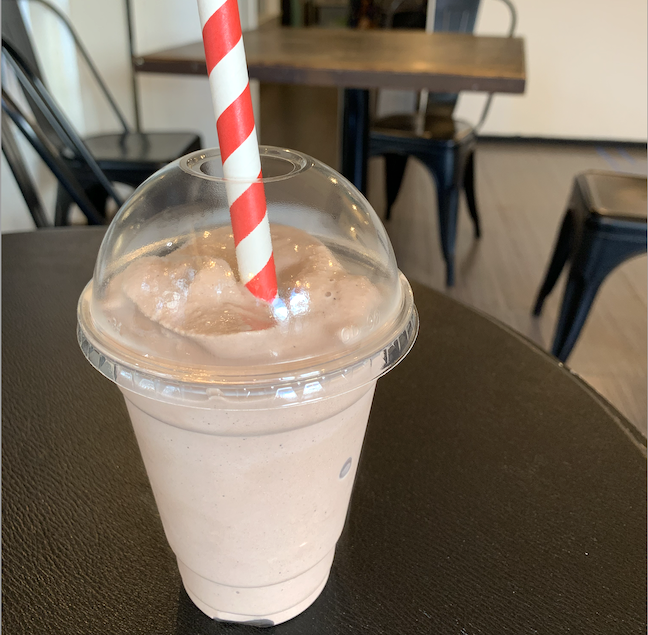 If there were no health consequences and I didn’t care about being shaped like a parade balloon, I’d have a milkshake every single day of my life.

Then again, maybe not. I get milkshakes as a treat, mostly on the road, like when we stop at Chick-fil-A — which makes a worthy shake — and now and then when a pang strikes. Shakes not only satisfy my stomach but must flood my brain with serotonin. Who needs MDMA?

Still — perhaps I like the idea of a shake-a-day more than the actual doing. We’ll never know: Because I ain’t doin’ it!

One thing’s for certain: I’m a basic, chocolate-milkshake guy. For this FFF, I chose two places known for making high-quality shakes: Dairy Inn, a 75-year fixture on MLK Street in St. Pete, and Urban Creamery downtown.

I did not ask for any customizations — like “can you make it a little more chocolate-y?” — just: “A 12-ounce chocolate shake, please.”

This classic walk-up eatery — a true slice of Americana — started as a Dairy Queen in 1947, then became the independent Dairy Inn in ’69. When I drive by, there always seems to be at least a few people waiting to get grab-and-go grub (the menu is massive), ice cream cones, shakes and what have you.

That was the case on this Wednesday afternoon, as a lone young woman ran the entire show. All credit to her as she calmly took orders, worked the cash register, assembled hot dogs, and made ice cream treats while people waited — patiently I may add. I didn’t clock it, but it probably took 15 to 20 minutes to get a 12-ounce shake. I passed the time watching her hustle. Even so, she could’ve use some help.

This chocolate shake ($3.40) was served in a white styrofoam cup with a clear plastic cover. I immediately noticed an ominous sign: A plastic spoon protruding from top.

I like my milkshakes drinkable, and the spoon did not bode well. It looked more or less like soft-serve ice cream, which is what the Dairy Inn makes its shakes with.

For grins, I tried to get some from a straw. No amount of sucking was going to deliver so much as a sip. It was clear that this shake was going to take awhile to melt down to drinkable status — even in the summer heat.

I relented and scooped up some in a spoon and ate it. Somehow taking a bite of a milkshake just seemed wrong.

Yes, it tasted nice and chocolate-y, but I didn’t come here to spoon a milkshake into my face. We hopped in the car and headed south toward Urban Creamery, hoping that a few minutes in a hot car would let the Dairy Inn shake melt to the point where I could consume it with a straw.

Located in a small storefront in the 600 block downtown, this ice cream parlor has a clean, unfussy feel. One woman worked the counter, but this place serves only ice cream products and we were the only ones there.

After I ordered my chocolate shake ($6.25), she reached down into the cooler and pulled up several scoops of hard chocolate ice cream into a silver cup. It looked for all the world like a real milkshake was about to happen.

The woman put the cup in the mixer untended for a while, then wrestled with it for a while longer. At one point, it sounded like she was working with power tools — which, in a way, she was. No doubt she was giving it her best effort.

I was hoping for the shake to come in a fancy, thick glass that gets wider at the top. Hey, one can dream. The shake was served tidily in a clear plastic cup with a top. That beats the bejesus out of styrofoam. A swirly, large-bore paper straw added a little pizazz.

In a word: drinkable. The luscious liquid flowed easily through the straw and into my mouth, only a bit of suction required. It was not too thick, not too thin. Urban Creamery uses only chocolate ice cream and whole milk, no syrup. Lovely. I sat, lazily sipping, looking out the window onto Central. I didn’t want to gulp it down too quickly, such was my bliss.

Back at the car, the Dairy Inn shake had melted some, but not to the point where it was easily drinkable. As I sucked on it through the straw, I got a faint aftertaste that suggested too much syrup. I placed each of the shakes in a cupholder and alternated sips on the ride home. That confirmed my decision.

The Winner of the Milkshake Showdown Is …

The combination of real (not soft) ice cream and the care put into it were the deciding factors. The Dairy Inn version was a worthwhile treat, but did not rate highly as a quality milkshake.

The next day, I was ready for another shake, but I fought off the temptation.