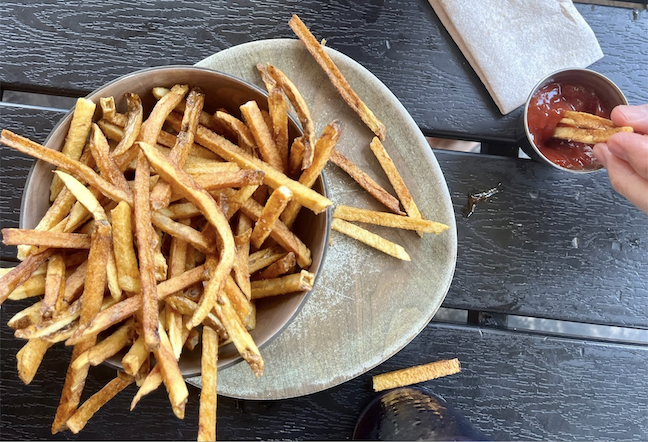 A face-off between two restaurants with impeccable reputations for tasty fries.

It wasn’t easy to choose two contestants for a French fries taste-off. How many places serve fries? Better yet, how many don’t? Plus, I wanted to feature eateries that made their fries fresh in-house, not frozen out of a bag.

So I did a little research — online and through friends — and came up with two places that have sterling reputations for serving top-notch French fries:

The Bier Boutique in St. Pete’s Historic Uptown vs. the German Knodle in the Edge District between Downtown and Grand Central. The latter choice may seem counterintuitive, but this small restaurant’s fries have made a few reputable Best-Of lists.

Fries are almost universally eaten as a side dish, but for this exercise I ordered fries and fries only. It’s interesting to stop, examine, smell and actually taste these slivers of tater rather than slathering them in ketchup and shoving ‘em in along with a bite of burger.

I was not aware of this place until doing my French fries research. It’s located across from Historic Round Lake, a half-mile north of downtown, on the bottom floor of a small condo building. We sat on the covered deck at lunchtime in mid-July and somehow it wasn’t oppressively hot.

The Bier Boutique has been open about three years, and is an apt example of a restaurant that plants a flag early on in a gentrifying neighborhood, apart from commercial thoroughfares, and makes the most of it.

The fries ($3.75) came out in a heaping pile that overflowed its bowl. “They’re hot, be careful,” our server said.

The Bier Boutique’s fries are long and thin — McDonald’s-shaped, if you will, but without the grease. They passed my cantilever test, which means they stayed straight and true while holding them horizontally. The restaurant cuts their own potatoes and fries them in a soy-based oil, without peeling them, so some are brownish on the outside. But they’re not burnt, not in the least.

The outer shell was firm but, thankfully, not full-on crispy. It gave way to a nice soft interior. As far as I could tell, these fries were unseasoned except for salt. A special nod to The Bier Boutique for applying the perfect amount of it. Over-salted fries = inedible.

Because they were so thin, I didn’t get a strong flavor of potato — but that was okay by me. They had their own simple taste, and it was very good. After the first few, I ate them Mickey D’s style — grab two or three, fold them in half, dip in ketchup and insert into mouth.

Even though the fries came out hot enough to merit a warning, they had cooled considerably after I finished snapping pics. Maybe that’s because they were skinny. I would have preferred them a tad warmer, but that’s on me.

I made a substantial dent in a hefty order of Bier Boutique french fries, but ultimately couldn’t finish. Next time I’ll get one of their Bison Bacon Burgers (kudos for the alliteration) as an accompaniment.

Tucked into a small storefront near the corner of Central and MLK Street, this eatery is hailed for its schnitzels and ‘wursts and other German staples, but it does list “French fries” on the menu. So, y’know, the joint is inclusive.

We stopped in on a Thursday around 2:30 and were the only two people in the place, which was immaculate, with white tables and chairs. Our delightful server was straight out of central casting: blonde braids, blue eyes, German accent. (She did not, however, wear the traditional dirndl, with the lace and puffy sleeves.)

After she got her mind wrapped around the puniness of our single order of fries ($4.50) for two, she put considerable care into making them.

They came out piping hot, piled on a simple white plate, with a side of ketchup. These fries had a pronounced outer crust and were thicker than those at The Bier Boutique.

I immediately noticed a pleasant aroma, one that I couldn’t place but was atypical of French fries. It turned out to be the result of finely chopped scallions, which flecked the strips of potato.

My fear that these fries would be extra-crispy was immediately allayed when I bit through the rugged outer shell into sumptuously moist potato. As I chewed, the two textures blended together elegantly — like a more refined rendition of the tater tot. Out of habit, I dipped some in ketchup, but they were excellent sans condiment.

We asked our server what herbs the recipe used. “It’s a secret,” she said with a coy smile. After some lighthearted interrogation, she gave it up: parsley, along with the scallions. This combination added a lovely herbal flavor and a hint of lightness to what is essentially a heavy, deep-fried dish.

These fries also had the ideal salt quotient. In fact, I don’t recall seeing salt and pepper shakers on the table.

The Winner of Le Duel des French Fries is …

I really liked both versions, but the German Knodle’s pinch of imagination with the parsley and scallions added a nice touch of surprise. If you’re a French fry traditionalist, and especially someone who prefers skinny fries, the Bier Boutique is probably a better bet.

As an aside, the deck was stacked against German Knodle. Just the night before, we had returned from a 12-day northern vacation during which I’d seen more than my share of fries on restaurant plates. Nine or so days in, I started ordering anything but fries on the side. (“Hmm, lemme see: I’ll have the gruel and the head cheese, please.”)

As it stood, I wasn’t exactly looking forward to a plate of hot potato strips on a muggy Thursday afternoon in St. Pete. The German Knodle gems overcame that bias in one bite.