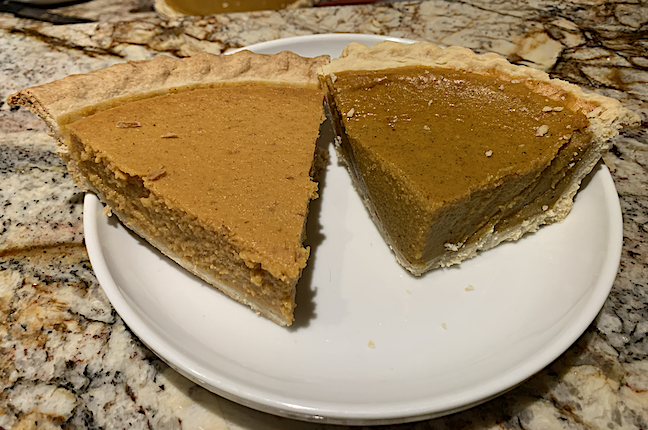 I’d like to go back to the late 1700s, find the person who thought to make a pie from the pulp of an ugly orange gourd, and shake their hand. Maybe even give ‘em a hug. That’s how much I dig pumpkin pie.

Just to be clear, I wouldn’t hang around in the late 1700s — when most historical accounts say pumpkin pie as we know it was introduced — because I like my 65-inch flat-screen too much, not to mention our king-sized bed, with sheets, and because I’m pretty sure I’d like the pumpkin pies now better than pumpkin pies then.

Pumpkin pie and Thanksgiving time go hand in hand. And that’s nice, but in a way it’s too bad. I’d gladly eat a wedge or two in the throes of August heat, or out on the back porch during a glorious Spring day. But I can’t get those slices.

Does it have something to do with pumpkin harvest season? I don’t know. But even if that’s the case, would it be so hard to stash away pumpkin material to make pies for other times of the year? Just sayin’. (I know what some of your are thinking: Bake one yourself, idiot. Um … not happening.)

But I digress. For this week’s FFF, with the holiday approaching, we taste-test two pumpkin pies — each from the bakery department in a supermarket chain: Publix and Winn-Dixie.

Those choices might come across as less than inspired, but think about it: That’s how most of us acquire our pumpkin pies for the Thanksgiving dinner table. At least those of us who don’t bake them ourselves.

We picked up the pies on the same evening trip at stores near our home in St. Pete and brought them back to the FFF Lab. We put them in the fridge, opened them the next day, let them warm to about room temperature and dug in.

The pie ($8.99) was imprisoned in a hard-plastic container with sticky sealer that said: grocery store. I wrestled it open, taking deep breaths all the while.

This one ($8.79) — courtesy of Publix’s elevated GreenWise brand — came in a brown cardboard box that said: oooh, artisanal.

I asked guy at the bakery counter about its provenance and he told me it was not made in-house but in the corporate bakery in Lakeland.

The pie slipped smoothly slipped out of its box, sparing me the agita.

This pie, at 9.75 inches in diameter, was noticeably larger than the one from Publix. It had the uniform orange-brown color that looked just a tad too perfect.

At 8.125 inches, and with some dark spots and dents other imperfections, The GreenWise pie maintained its artisanal look when removed from the box.

It was considerably darker than Winn-Dixie’s, and that said: rustic.

What’s not to like? It’s pumpkin pie, after all.

It occurred to me during this Lab taste test that, for decades, I had shoveled bites of pumpkin pie into my face, accompanied by swallows of milk, often during conversations at the Thanksgiving dinner table.

For this exercise, I had to really stop and taste the stuff. I discovered subtle differences between the two.

Both pies had a similar texture, which was slightly softer than I prefer, but nowhere approaching mushy.

The Winn-Dixie bites were a a tad smoother, sweeter and had a bit more pumpkin flavor. The Publix GreenWise pie had a farmhouse-ish flavor, bolder with a bit more of that elusive pumpkin-pie aftertaste.

As far as crust, I’m not the guy to ask. I’m notorious for leaving the pieces of outer crust on the plate. They’re a waste of valuable stomach space, especially on Thanksgiving. The filling, mixed with bottom crust — that’s what matters.

To be thorough, I did take a bite or two of crusts, and if pressed, I’d say the Publix version had a shade more character.

And the Winner of the Supermarket Pumpkin Pie Taste-Off Is …

Winn-Dixie. (I’m sure there are certain folks who will consider this decision sacrilegious.)

Sweeter and smoother rendered W-D’s pie more comforting, and more agreeable to my tastebuds. However, if you put a slice of either in front of me, I’d happily gobble it up.