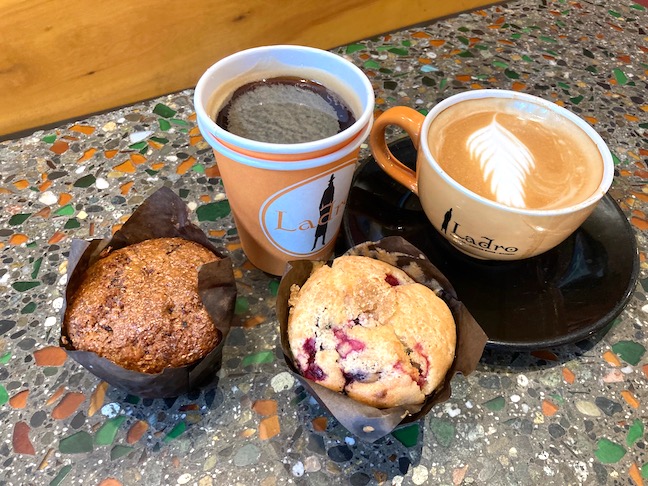 SEATTLE — There’s no question that this city has a far more developed coffee culture than that of the Tampa Bay area. I mean, Starbucks started here. Plus it’s cold, dank and rainy most of time. Without coffee, people in Seattle might never get out of bed. (I kid, I kid.)

As for the Bay area, despite the sun and balmy temps, our coffee scene has found considerable traction over the last decade, with several popular homegrown brands. So while on its face a Seattle-vs.-Tampa Bay coffee contest might seem like a mismatch, I’m not willing to go there.

Before we begin, a disclaimer of sorts: I rarely if ever go to coffee shops. I’m far from a joe aficionado, let alone an expert. One cup of morning Dunkin’ out of a pot in the kitchen and I’m good to go.

You could argue that makes me less than qualified to play judge and jury for this FFF, but I would counter that I’m entering this java arena as a tabula rasa. I’m just bringing my tastebuds and an open mind into the ring.

To add an extra dimension, I’ll order a regular coffee and a regular latte at each location, along with a muffin.

Our contestants are: Blind Tiger Cafe, which was founded in 2014 and has seven locations in Hillsborough County, and Caffe Ladro, which has a bunch of shops in Seattle. We chose one in the Queen Anne neighborhood.

I was in Blind Tiger’s SOHO cafe all of two minutes during lunch hour when I became the sand in the vaseline. I asked for a cup of regular latte with a fun design on top, only to be told that Blind Tiger no longer uses traditional coffee cups. They dumped ’em during Covid.

I explained my FFF mission, said I was hoping for the full latte-in-a-coffee-shop experience, and asked if they could come up with a work-around. To their credit, the two young people behind the counter exhibited no signs of exasperation.

Our barista, Luis, got resourceful and repurposed a cup they were using for something else. (I didn’t ask.)

Luis admitted to being an inexperienced latte artist, but said he’d give it his best shot. He did an admirable job, forming a white heart out of the foam.

The Drip Coffee ($3.25) came in a sturdy paper cup with a stirrer inside, wrapped in a burn-protecting sheath with the Blind Tiger logo on it. I ordered the coffee black, and it was black.

Apparently, Blind Tiger ditched plates along with the coffee cups because the blueberry muffin arrived in a paper bag. When I asked for a plate, Luis gave me the paper sandwich holder below.

Latte: I ordered a basic latte ($5), no flavor added, because I don’t like sweet coffee drinks. When I put my lips to the cup and sipped, it felt like velvet. I don’t drink lattes, but I might have to start. This one was ready to drink — not to hot, not getting cold.

True to my order, the lovely liquid wasn’t sweet, but neither was it harsh or strong. Smooth is the word that pops to mind. The latte didn’t overplay the froth, either. It all blended together beautifully.

Coffee: I first tried Blind Tiger’s regular blend sans my usual Half & Half. Drinking black coffee was a new experience for me and I was expecting my taste buds to get worked over. I took several delicate sips and was pleasantly surprised to find it smooth and easily drinkable. When I put in the Half & Half, if anything the coffee tasted a bit bland.

Oh, almost forgot: the blueberry muffin. It barely garnered my attention, but it went well enough with the latte and coffee. In what universe does a blueberry muffin not go well with coffee?

We walked a few blocks to Cafe Ladro from the home of my brother Kris and his wife Jacqueline. When we arrived around 11 a.m. on Saturday, it was 65 degrees and mostly cloudy — but no sign of rain. An altogether ideal day for a coffee tasting.

Fifty paces from the small, funky cafe there was — you’ll never guess — a big, blocky Starbucks. Apparently, there’s a Starbucks on every corner in Seattle, too.

I ordered a Short Americano coffee ($3.40) and a Short (unflavored) Latte ($4.15), and asked the barista to make a pretty design on it. He was glad to oblige. Cafe Ladro had real coffee cups at the ready.

I also ordered a vegan blueberry muffin, and couldn’t resist the date & walnut bran muffin (both $3.50).

The young fellow got right on our order — no waiting in the corner for my name to be called.

First off, the latte’s leaf design — or was it a tree? — was impressive to a newbie like me. The Americano, which came in two stacked paper cups, presumably to protect the fingers from burning, looked heartier than its counterpart — maybe a good thing, maybe a not-so-good thing.

Americano: For the record, it’s categorized as a Light coffee from the Pantan Musara region in northwestern Indonesia. It’s tasting notes are tangerine, cocoa nib and thyme — none of which I could detect.

This information came from the 12-ounce bag I bought after finishing my cup. It was that good. I drank it black and was instantly charmed by its aroma. It had a heftier texture than the competition, and a rich, bold flavor. I finished it without giving Half & Half a passing thought.

When I have a cup back at home, I’ll try again to realize those taste notes, although I’m not counting on it.

Latte: This was a nice latte, smooth and creamy, as I’d expect it to be. It did not, however, stop me in my tracks.

Both of my coffee drinks benefited by the accompaniment of the muffins, which are made at Ladro’s bakery. The vegan blueberry was impressively tasty, no hint of vegan-ness. The date-walnut-bran muffin was coarse and crunchy and moist and silky all at once. I wanted to buy an extra suitcase and fill it up with these gems to take home.

The Winner of the Coffee Bout Is …

We have a split decision — well, kind of.

As an overall coffee experience, Cafe Ladro is the clear winner. The Americano had more flavor and personality than Blind Tiger’s; the shop had a funky, urban vibe; real cups were in use; the muffins were epic; the barista’s game was tight — he was helpful and knowledgeable and not the least bit pompous.

Blind Tiger aimed to please, but came off as rather discombobulated (although, in fairness, my request for an actual cup contributed to that).

I give Blind Tiger the nod in the latte category. Its version oozed comfort and bested Cafe Ladro for scrumptiousity.

So all told, Seattle wins this coffee showdown — but on points, not by a knockout.