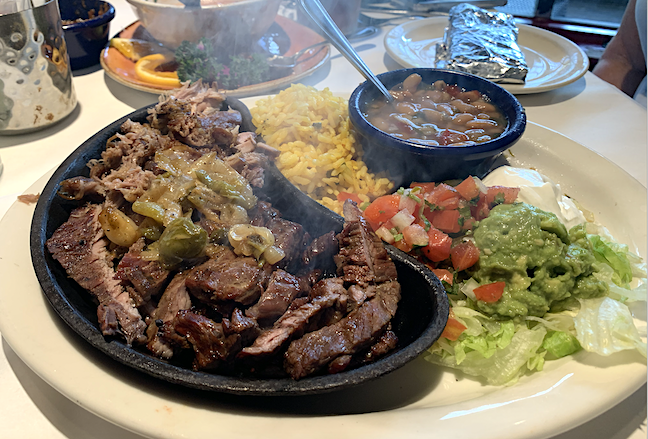 Bonnie and I are spending a month in this steppe city (elevation: 7,200 feet) that enchanted us during a long-weekend visit four years ago. We also wanted to experience some extended chilly weather — the first time since 1982.

It’s, um, been colder than we anticipated. Morning lows are usually in the lower 20s, afternoon highs in the mid-30s to mid-40s.

But it’s sunny all the time. And you know what? It’s a dry cold. No, seriously. Somehow these low temps are less brutal than those I recall from my younger days in the Northeast.

(Excuse me for a sec. What? This is a food column, not a travel column?) Oops …

So for this FFF, I chose steak fajitas, which I hadn’t eaten in quite a long while.

Tampa Bay has a lesser reputation than Santa Fe for Mexican food, but we all know there are some very good options.

This week’s contestants are: Mucho Gusto, a much-lauded little place less than a half mile from the Santa Fe’s bustling city square, and Miguel’s Mexican Seafood & Grill, a Tampa institution on the corner of Kennedy Boulevard and MacDill Avenue.

Could we be in for a mismatch? Let’s find out.

We stopped in on a Tuesday, mid-afternoon, and all but had the large dining room to ourselves.

Melodramatic Mexican ballads (sung passionately by male tenors) emanated too loudly from the sound system. It dominated the ambience and hampered an otherwise relaxing vibe.

The most important thing about fajita presentation is the sizzle, right? This dish’s had volume. And aroma. (Look closely at the photo above and you can see a bit of steam wafting upward.)

The meat — steak and pork (we couldn’t resist the latter) — was crowded into a hot cast-iron plate, with the sides (beans and yellow rice) and toppings right next door on the white mother plate.

I’d all but forgotten that part of the pleasure in eating fajitas is building your own series of soft tacos — in this case on house-made flour tortillas.

The make-or-break on steak fajitas is if the meat is tender or not. Miguel’s made the grade, although the beef could’ve been juicier. The seasoned steak blended nicely with grilled onions and peppers, toppings (lettuce adding a bit of crunch) and smears of sour cream. The food stayed heartily warm throughout.

The yellow rice and pinto beans were standouts. I kept wondering what set them apart from similar versions I’ve had. Turns out these were frijoles charros, which had a secret ingredient …

Bacon. And you know what they say about bacon.

A final note: Even though the Cuban-style roast pork wasn’t part of the competition, we liked it better than the steak. Just something to consider if you order fajitas at Miguel’s.

On a Tuesday around 6 p.m., wrapped in our winter coats, we walked the few feet to the inviting entrance. There we encountered a man, also heading in, who offered: “Some of the yummiest food in town.”

The small room on a slow night had a cozy, intimate feeling. The space was well-lit but not bright, with low-volume music that made conversation easy.

A little low on sizzle. That was a bit surprising, because the fajitas were served in a cast-iron skillet. Otherwise, the dish — chunks of steak spread over a bed of large onion and pepper slices — looked altogether appetizing.

As we piled the stuff on our tortillas, I stopped to admire the char on the onions and peppers, the pieces of jack cheese and and dabs of sour cream and guac.

Ah, when it came to the fajitas make-or-break, though, Mucho Gusto broke down. The steak was flat-out chewy and had little flavor. That lack of sizzle proved an apt foreshadowing: It did not take long for this plate of fajitas to turn room temperature and then cold.

As for the sides, I’m reminded of the old Borscht Belt joke: “The food here is terrible — and such small portions.”

While the rice and beans were not terrible — the refried beans were actually pretty good — they became almost inedibly cold within minutes. And both came in miniscule bowls that held a few bites each.

My final word(s) on Mucho Gusto:

And the Winner of the Tampa Bay vs. Santa Fe Fajitas Taste-off Is …

Need I even say it?

Regarding Santa Fe and Mucho Gusto, I considered whether I’d fallen prey to high-expecations syndrome. Consideration duly completed, I can say without equivocation:

Nope. The Miguel’s meal was superior in every way.

Programming note: David Warner, the founder of Friday Food Fight, sits in for me for the next two weeks.