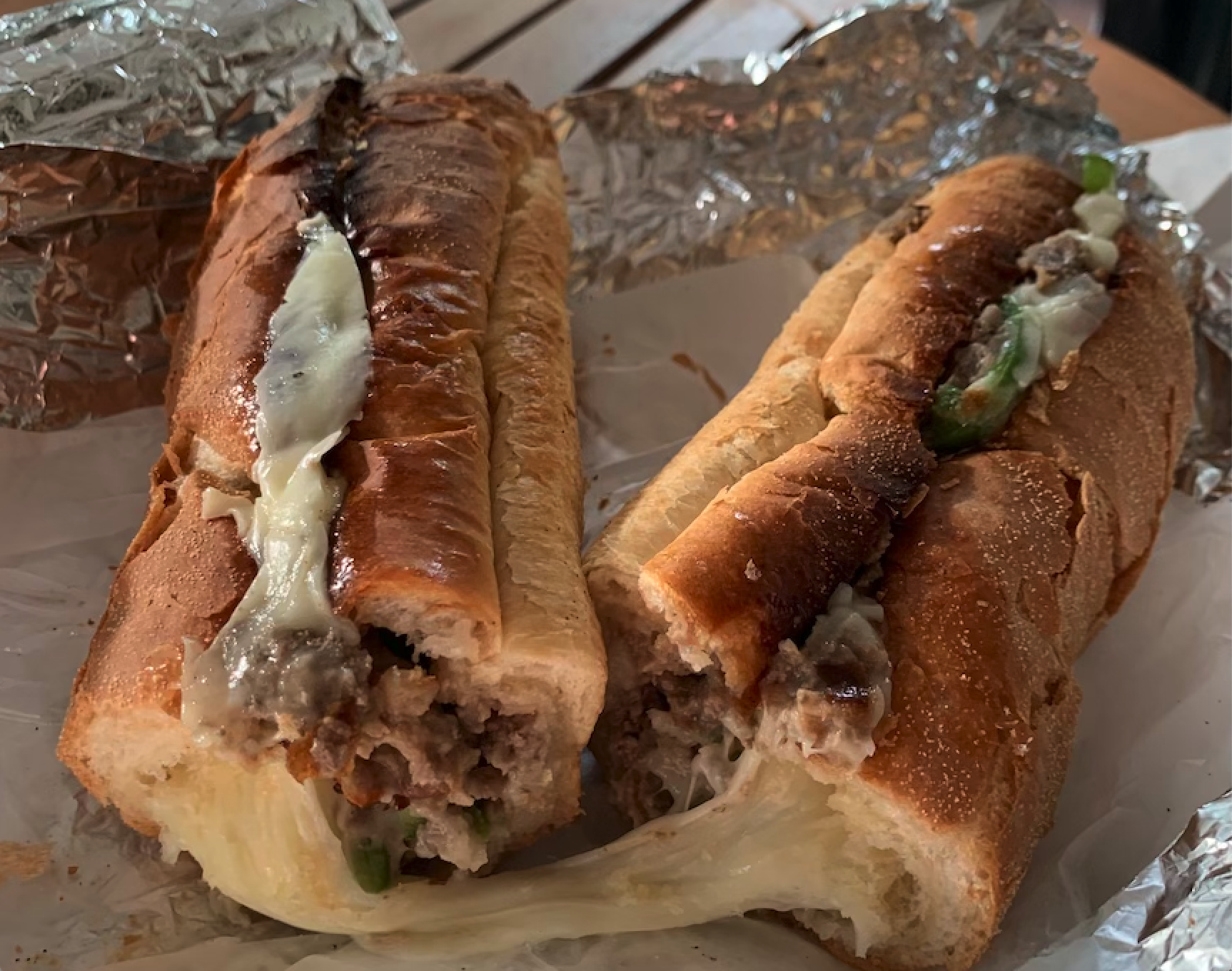 Friday Food Fight: The Clash of the Cheesesteaks

Hey I been to Philly awright? Lots.

My wife’s from DelCo — aka Delaware County — and when the kids were young we’d take regular vacations to the shore. So I know from cheesesteaks. I had one at Pat’s before a Sixers game — long time ago, when Doctor J and Moses and the rest delivered a title. I’ve had cheesesteaks from delis, grocery stores, restaurants, Wawa. I vaguely recall ordering a one from a muffler shop. It was pretty good.

So those are my cheesesteak bona fides. Now on to the Friday Food Fight, which pits two takeout-only places a little over a mile apart in St. Pete:

4th Street Pizza and Astra Pizza — each of which you could affectionally call a hole-in-the-wall, both of which make subs (hoagies, if you like) and are proud of their cheesesteaks.

It was a welcome surprise that the two sandwiches were considerably different. I ordered each with grilled onions and peppers.

To sum up, Astra’s is longer and thinner; 4th Street’s is shorter and fatter. It’s evident even in their foil wrappers. Same goes for when you open them up.

4th Street’s blend of meat, American cheese and veggies is an inch-and-change thick in the bun, considerably more that the competition.

Astra’s narrower bun has a bit of char from being toasted, and the mozzarella cheese oozed out when I opened it up.

Quite a contrast, all told.

Before I begin, though, both versions were scrumptious. After I finished my carefully deliberated taste test, my wife Bonnie and I attacked, laying waste to them in minutes. Twenty years ago, maybe less, ordering a cheesesteak in Tampa Bay was basically a fool’s errand. These two joints show that — Wawa notwithstanding — you can get a legit version around here.

This sandwich is more like a traditional Philly cheesesteak, with the ingredients melded together and stuffed into an untoasted roll that was doughier than its counterpart. The thing looked hearty and inviting. I flashed back to Asbury Avenue in Ocean City.

I instantly detected that authentic Brotherly Love flavor. The shaved steak was dominant, made gooier by the cheese. There was a hint of onion and an occasional mini-crunch courtesy of the peppers.

But this conventional approach can get homogenous, which numbs the tastebuds as you work farther into the sandwich. I found the roll to be a bit too soft and bland, more a container for the inside ingredients than a taste benefit.

Astra’s roll was crispy, even a bit unsightly. The cheese had been layered on top of the meat and veggies. Green peppers peeked out. A cheesesteak purist would probably have looked and said, “what the … ?”

Carlos, the owner — he’s from Jersey, so that’s probably why he went off book with his cheesesteak. Each ingredient stands on its own: the just-right crisp of the bun, which causes some crumbs to drop in your lap; the hearty layer of moz on top, an introduction to the meat; the onions and peppers lightly grilled, allowing each to retain their crunch. I don’t know where Carlos sources his steak, or how he seasons it, but it had more personality than its counterpart — maybe because it was able to stand on its own.

In all, this one’s flavor had more character.

And Now for the (Anti-Climatic) Moment You’ve Been Waiting For: The Winner of the Friday Cheesesteak Clash Is:

Let me qualify this by saying that my choice was a matter of personal preference. If you like your cheesesteaks made more conventionally, there’s a good chance you would prefer 4th Street’s. Both could be considered comfort food, and 4th Street’s is more comforting. Astra, however, delivered more surprise.

Another note about Astra before I close. I started ordering pizza from this hidden treasure at 16th Street and 30th Avenue North about two years ago, and immediately decided it had the best NY-style pie in town. It’s become a weekly go-to.

This was my first cheesesteak. It won’t be my last.