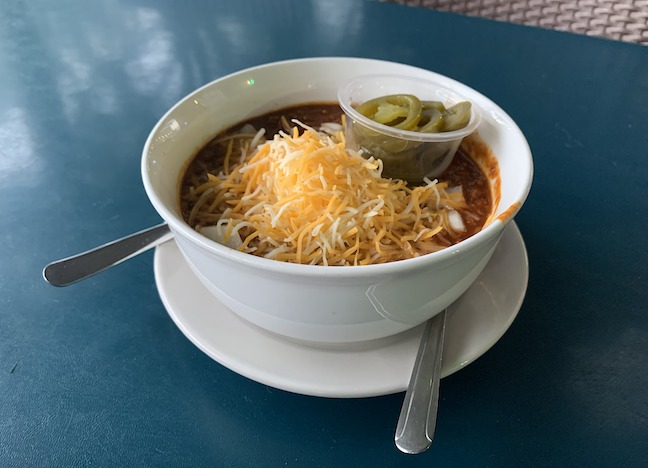 Ready for a chili weekend?

For starters, temps are expected to drop into the low 40s. And, probably more important, it’s Super Wildcard Weekend! For the handful of you who don’t know what that means, here’s what it means: Six win-or-go-home NFL playoff games, starting at 4:30 p.m. Saturday and ending when the Buccaneers beat the Cowboys on Monday night. For my money, it’s one of the best weekends of the year.

Cold weather and football make for a powerful chili convergence. Crockpots will overflow. Stovetops will be stained with red-brown sauce. Stomachs will rumble. And restaurants will serve the ubiquitous soup. Or is it stew? Some experts say chili is its own category, and I tend to agree.

I searched online to find two restaurants where chili is not an afterthought — and might even be a specialty. I disqualified places that touted all-beef chili. Chili’s gotta have beans, man. C’mon.

Our contestants are: Mixer’s at OKW, formerly Old Key West, situated in the Grand Central section of St. Pete; and Pesky Pelican, a mile south of Tyrone Mall. 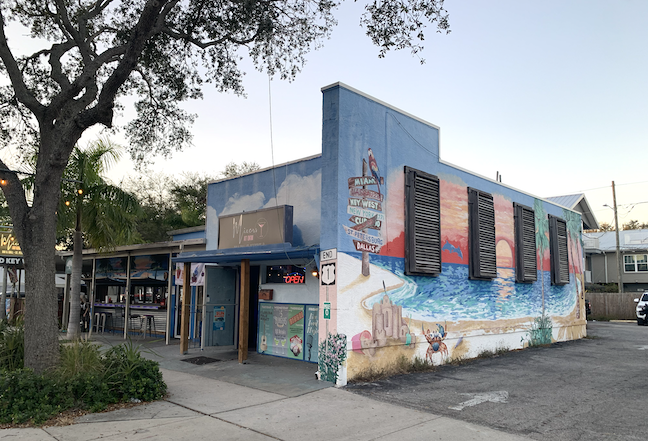 This ramshackle, multi-space joint appears to be far more bar than restaurant. We arrived just before 6 on Wednesday, and during our visit customers started to show up for buy-one-get-one drinks. We seated ourselves at a no-frills four-top on a covered patio. The Central Avenue Trolley cruised by.

We were unsure whether there was table service, so I popped into the bar area and found the manager/bartender/server, who was quick with a smile. I ordered chili ($7.95), loaded (raw onion, shredded cheese, sour cream, jalapeños on the side, for an extra buck-fifty), with water. Bonnie ordered sweet tea. Ten years ago, our passing up BOGO drinks on a late Wednesday afternoon would’ve been unthinkable, sacrilege even. Times change, huh?

My research found that Mixers has won the Grand Central District’s Annual Chili Cook-Off several times. Grand Central is but 15 blocks long and four blocks wide, but — who knows? — the area might runneth over with ace chili chefs and the competition could be fierce. 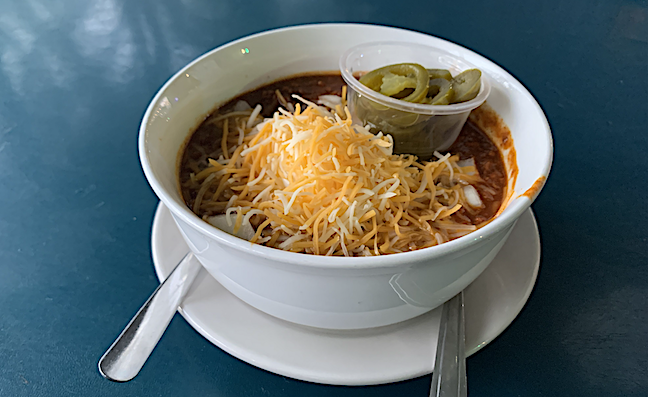 The tidy bowl of chili was clearly ladled out with care. And including two spoons for sharing was a nice touch for food service in a saloon. The clump of shredded cheese obscured the chili beneath. 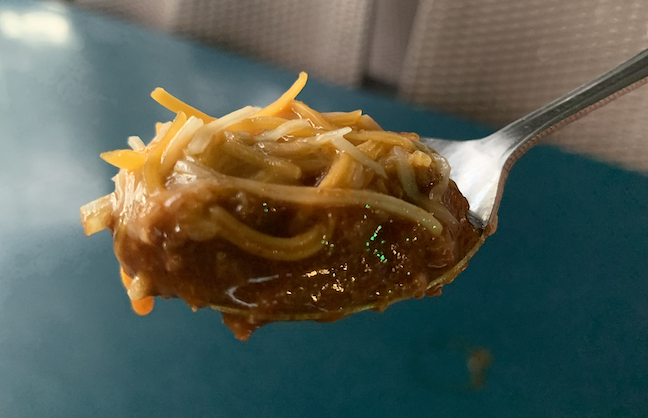 Think of it as down-the-middle chili. Mixers’ dish attempted nothing bold, preferring to stay in the comfort-food lane. But it wasn’t bland. It had a hearty flavor, with a smidgen of spicy kick. I like a hint of sweetness in my chili, but detected none.

The beef was too finely ground for my taste, and the beans were few and far between (and small). While I wasn’t terribly impressed with the actual soup/stew itself, combining it with the extra ingredients made for pleasing bites.

The onions, which lasted until the final spoonful, deserve mention. They were fresh, crunchy and free of bitterness.

I’m cautious with jalapeños, but found that breaking them into small bits and scattering them in gave the dish some extra character.

I finished the bowl — the portion was just right. And while I found it satisfying, I couldn’t see awarding it any ribbons. 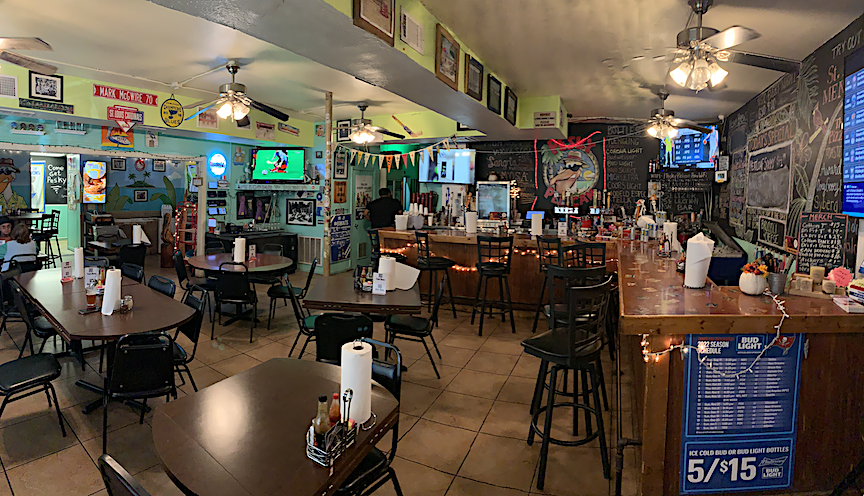 One of the delights of this gig is that it forces me to seek out places I wouldn’t ordinarily go — or even hear of.

Sometimes it works out, sometimes not. The jury’s out on Pesky Pelican. Situated in a run-down strip mall, this place is all over the place. Owned by a father/daughter team from St. Louis, the eclectic menu touts specialties from that city, especially Provel cheese. But Bonnie’s Prime Rib Philly came on an Amoroso roll, the pride of Philadelphia. And the menu includes everything from Cubans to Nashville hot chicken to smoked fish spread.

Nary an inch of the interior walls has been left uncovered. It’s as if the owners accepted every bit of swag from every vendor, then put on blindfolds and threw the stuff against the wall. Wacky, but not without its charm.

And there’s no denying Pesky Pelican’s innate friendliness. On Thursday around 3, Bonnie and I and were the only customers seated at a table, along with a couple of men at the bar. We carried on a lively, running conversation with the two female servers on shift. 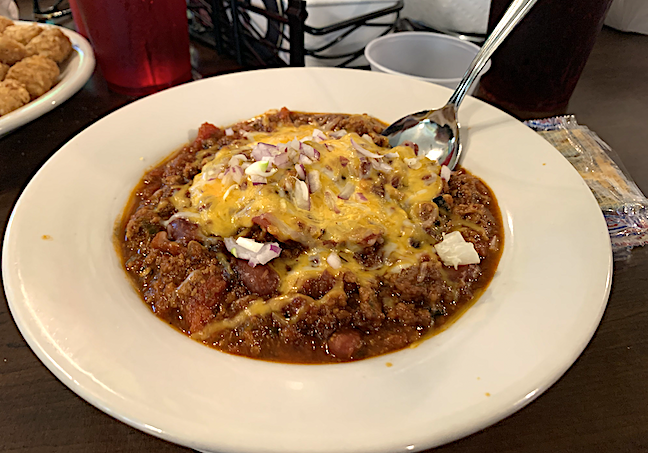 This bowl of chili ($6.99) came loaded (albeit without sour cream) with no upcharge. The cheese on top was already melted (as opposed to shredded). The red onions were closer to diced than chunky. 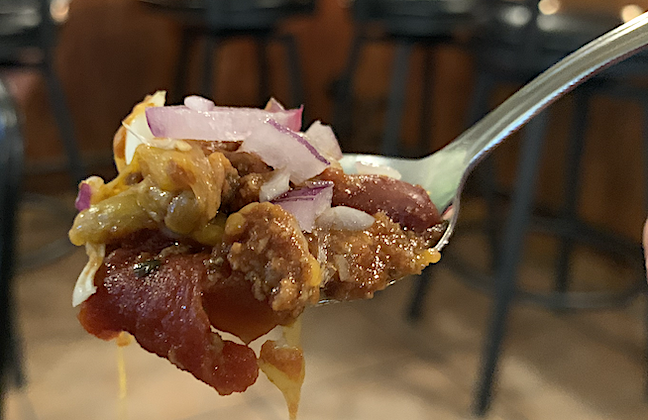 It was thicker than Mixers’ — and also pipin’ hot — but very tomato-forward. In all, this chili could have used more chili spice. The beans were more prevalent than the competition’s but — per my preference — still lacking. And the beef was ground a bit too finely.

The melted cheese proved to be a problem. It made the top bites gooey, and once the cheese was (quickly) gone, the stew/soup had to stand on its own, which accentuated the tomato-ness. The onions added only a modicum of crunch and little flavor. I cut up some jalapeño and dropped it in, which added a touch of zing.

And the Winner of the Chili Taste-Off Is …

Despite my good-faith efforts to find some exceptional chili, I came up short. I would not recommend either of these versions.

It occurs to me that chili just might be one of those foods that are better made at home — using time-tested recipes (with more beans) that only need to please the folks living there and, occasionally, guests dropping in to watch football.