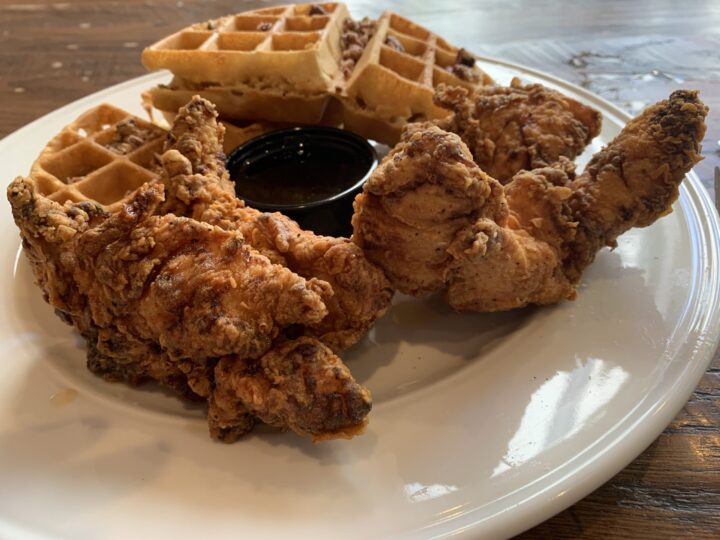 Friday Food Fight: Who does chicken ‘n waffles better — The Hangar or Datz?

It’s what’s for breakfast. Also for lunch. And yes, dinner. I speak of the divine combo of chicken and waffles, a dish whose origins have been variously assigned to a Harlem supper club in the 1930s, to Southern cooks transplanted from points north, and even back to the invention of the waffle iron in the 1700s. Whatever its provenance, chicken ‘n waffles is a prime example of that old Reese’s Peanut Butter Cups slogan: “Two Great Tastes That Taste Great Together.” But for the dish to work, each of the elements has to be done to perfection — the fried chicken and the waffles — and to make it really sing, a third component can make all the difference: the syrup. Sounds so simple, but it’s not, which may be why it’s not all that common on area menus. But for this week’s FFF, we did find two bastions of comfort food whose variations on C&W are widely admired: Datz and The Hangar. Which chick will be the champ? Which waffle will wow? Read on.

Recipe for a perfect winter afternoon: a Florida Orchestra matinee at The Mahaffey, followed by dinner across the street at The Hangar Restaurant & Flight Lounge — preferably on the outside deck, where you can get a bird’s-eye view of private planes taking off from Albert Whitted Airport to soar over the bay beyond. The view is not the only reason to hang at The Hangar. There’s the popular Monday Night Jazz Jam, live music on Saturdays, great happy hour deals and a menu served up with care by a friendly staff overseen by executive chef-turned-owner Matthew Smith, who bought the business from St. Pete Hospitality Group’s Steve Westphal last month. The food at The Hangar is reliably delicious, with dishes grouped under humorously aeronautical headings. The appetizers are “Pre-Flight,” the desserts are “Landings” — you get the picture. But we’re here for the “Altitude,” where (along with such tempting offerings as Bacon Wrapped Meat Loaf and, of course, Airline Chicken Breast) we are pleased to see that Chicken and Waffles is available all day and is described as a “house specialty.” Let’s eat! The fried chicken: Big, boneless white-meat chicken tenders that live up to the name — they’re actually tender. Juicy and very fresh-tasting, with a light golden batter that adheres nicely to the chicken. The waffles: Alas, they didn’t come out as well as the chicken. The waffles were tough, possibly overcooked, with burnt parts on their undersides. The accouterments: They saved the day! The Hangar’s C&W arrives with a bowl of savory sausage gravy and a little pitcher of spicy maple syrup. Each is tasty in its own right, but pour ‘em both onto the chicken, then the waffles and finally the chicken and the waffles, and you’ve got yourself a knockout combo! The service: Amiable if a bit slow. The only disadvantage to eating at The Hangar right after a Mahaffey show is that lots of other concert attendees have the same idea. But with planes to gawk at and weather to bask in, we didn’t mind the wait. The next day: The C&W portions at both The Hangar and Datz were so large that it was a no-brainer to eat half and take the rest home. After a day (actually, two) in the refrigerator, the Hangar’s version held up fine — and even the waffles tasted better.

The inspired invention of restaurateurs Roger and Suzanne Perry, Datz has delighted diners since exploding onto the scene in Tampa in 2009, spawning a St. Pete branch three years ago. That’s where I stopped for my C&W lunch recently, in their sprawling space adjacent to the James Museum (a visit to which, combined with a meal at Datz, would also make for a perfect afternoon). The over-sized newspaper-esque menu at Datz is an adventure in itself. Its punny names (Salmon Hayek, Put a Steak In It) and big color photos perfectly suit a place known for big, brash flavors, including a burger (the legendary Cheesy Todd) whose mac ‘n cheese “buns” landed it on Good Morning America. It’s “comfort food with flair,” say the Perrys, and the description is right on. That’s why we figured their “Waffles N’ Tweet,” listed on the menu under House Favorites, would be a worthy contender in this C&W taste-off. The fried chicken: A bit disappointing. The taste of the chicken tenders was fine, but the very crispy coating was slightly burnt and tough to cut through, and the chicken was a tad dry. The waffles: Dee-licious! The big Belgian waffles had just the right amount of sweetness and crunch — perfectly cooked. The accouterments: Again, the accompaniments were crucial. The bourbon maple syrup was velvety-good, and the candied pecans added dimension and surprise. They should bag those things — they’re highly snack-worthy all by themselves. The service: Very pleasant and very quick. It was well into the afternoon when I ate, so I don’t think the restaurant was too crowded, but still it’s nice to be able to say, “What? Already?” when the meal arrives. The next day: Again, time in the refrigerator didn’t hurt. In fact, it helped — and luckily I’d asked to take home a little container of the bourbon maple syrup, too.

So who gets to be crowned the Chicken & Waffle Champ?