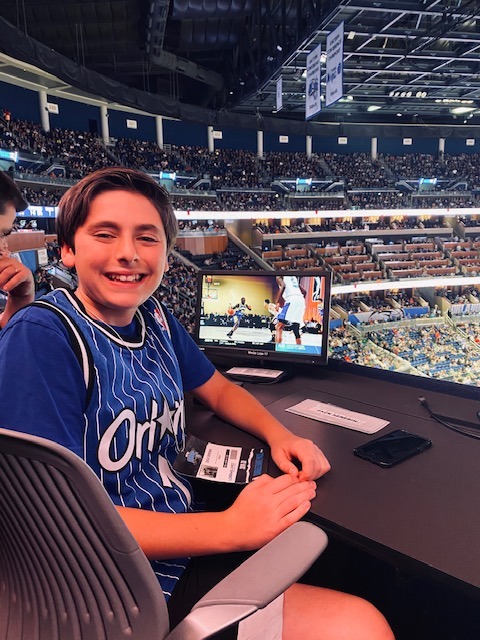 Zack in the Media Loge at Amway Arena.
Sports & Recreation

Giving Back with Zack: In Orlando with the Magic

NOTE: We visited with the Orlando Magic team on Friday, two days before the helicopter crash that killed the basketball legend Kobe Bryant, his 13-year-old daughter and seven others. One of the players we spoke with, forward Aaron Gordon, was interviewed after the accident by The Athletic and shared his memories of working with the star in a minicamp last August:

“‘This past summer, it really felt like he was starting to develop a mentorship with me,’ Gordon said. ‘It was a beautiful thing just to get to experience some of the things that he was teaching us about the game of basketball and about the game of life. He’s a very unique individual, a very fierce competitor.'”

Since Bryant’s death, many stories have surfaced of his generosity — to fans, to young players, to his old high school — gifts and support that he gave without seeking publicity. In the wake of his tragic death, we’re even more committed to shedding light on those professional athletes who are carrying on Bryant’s tradition of giving back. —Tracey and Zack Serebin

Zack and I arrived at Amway Arena in Orlando Friday morning for the Orlando Magic players shoot-around.  We were escorted through the arena to the media workroom, where we got to chat with Fox Sports’ Nick Anderson, who was drafted by the Magic in the first round in 1989 and was the first draft pick in the franchise’s history, as an expansion team. We enjoyed hearing his stories of playing with Shaq and Penny Hardaway and against Michael Jordan. After a quick photo,  we moved out of the workroom and met Chief Communications Officer Joel Glass at the entrance to the practice facility.  He told us Aaron Gordon and center Mo Bamba  would be ready shortly for their interviews.

We literally had only a few minutes before a 6’9” basketball player began walking toward us whom I immediately recognized as Casper from the movie Uncle Drew. He and Zack immediately began chatting as our cameraman, Doug, set up for the interview.

Aaron’s personality is warm, amicable, patient and lighthearted. He’s very enthusiastic about his Gordon Family Giving Foundation, and passionate about Code Orlando, which he launched last year with a $25,000 grant. He received that donation as part of the Rich and Helen DeVos Community Enrichment Award, which honors a player who has dedicated his efforts off the court to enhancing others’ lives.

We learned that his goal is to someday build a school like LeBron James has done with his I Promise School.  Code Orlando is a month-long summer program for high school students designed to empower youth and broaden their minds through technology, innovation and collaboration. Thirty-one teenagers graduated from the program last year, which was a dual effort of Gordon and his mother, Shelly Gordon, who is a computer scientist.

Next we met Mo Bamba, a 7’1″ player with a big smile and a calm, humble and laidback demeanor. He was drafted by the Magic in 2018 in the first round, after playing only one year in  college with the Texas Longhorns.  While getting acclimated into the NBA and working hard to be a great defensive player on the court, he is also spending time off the court by visiting kids in schools, throwing pizza parties and donating his jersey after each home game to a different kid in the community.

After we finished the interviews, I talked with Joel Glass about the Orlando Magic Youth Foundation and the DeVos family’s contribution in the Orlando community. He shared that just last night they held a surprise ceremony announcing 16 grants that the OMYF was awarding to local nonprofits. The team distributed 11 $50,000 grants, two $100,000 grants and three $300,000 collaborative grants totaling $1,050,000.   This makes the 12th time that $1 million has been distributed through the OMYF since its inception. That’s quite an impact they’re making on Central Florida, and their players are following suit.

That night we attended the Magic’s game with the Boston Celtics. Our media credentials gave us access to the pregame, where we watched the Magic players practice shots and Zack saw the Celtics’ Jaylen Brown warming up on a stationary bike behind us. Brown agreed to a photo, although when he spotted Zack’s Orlando Magic jersey he joked,  “He was wearing the wrong jersey.” We also go to chat with Fox Sports’ Dante Marchitelli, who we’d later see with Nick Anderson broadcasting the pre-game.

Deciding to get closer to the Celtics, we made our way around the court and sat in chairs on the floor to watch Kemba Walker (Zack’s favorite player), Michael Carter Williams, Nikola Vucevic, and Evan Fournier practice shots before the game.

Kemba seemed to be hitting everything he shot, and I told Zack he was going to have an awesome game if he kept shooting like that. Sure enough, he would go on to scoree 37 points that night.

Watching the game in the Media Loge was a fun experience.  We were located on the 2nd level in a section across from the corporate suites, with small TV screens at each seat for checking stats and information. Zack set up his TV to ESPN so he could watch other basketball highlights around the league while taking in the action in front of us.

The energy in the arena was electrifying: pumped-up music, the cheering crowd and activities going on around the arena every minute there was a break in the action.

It was an intensely battled game with the Magic ahead most of the first half, until the Celtics went ahead in the 3rd quarter, and the Magic kept coming back matching shot after shot. It was a close game up until the very end, when the Celtics beat the Magic 109-98.