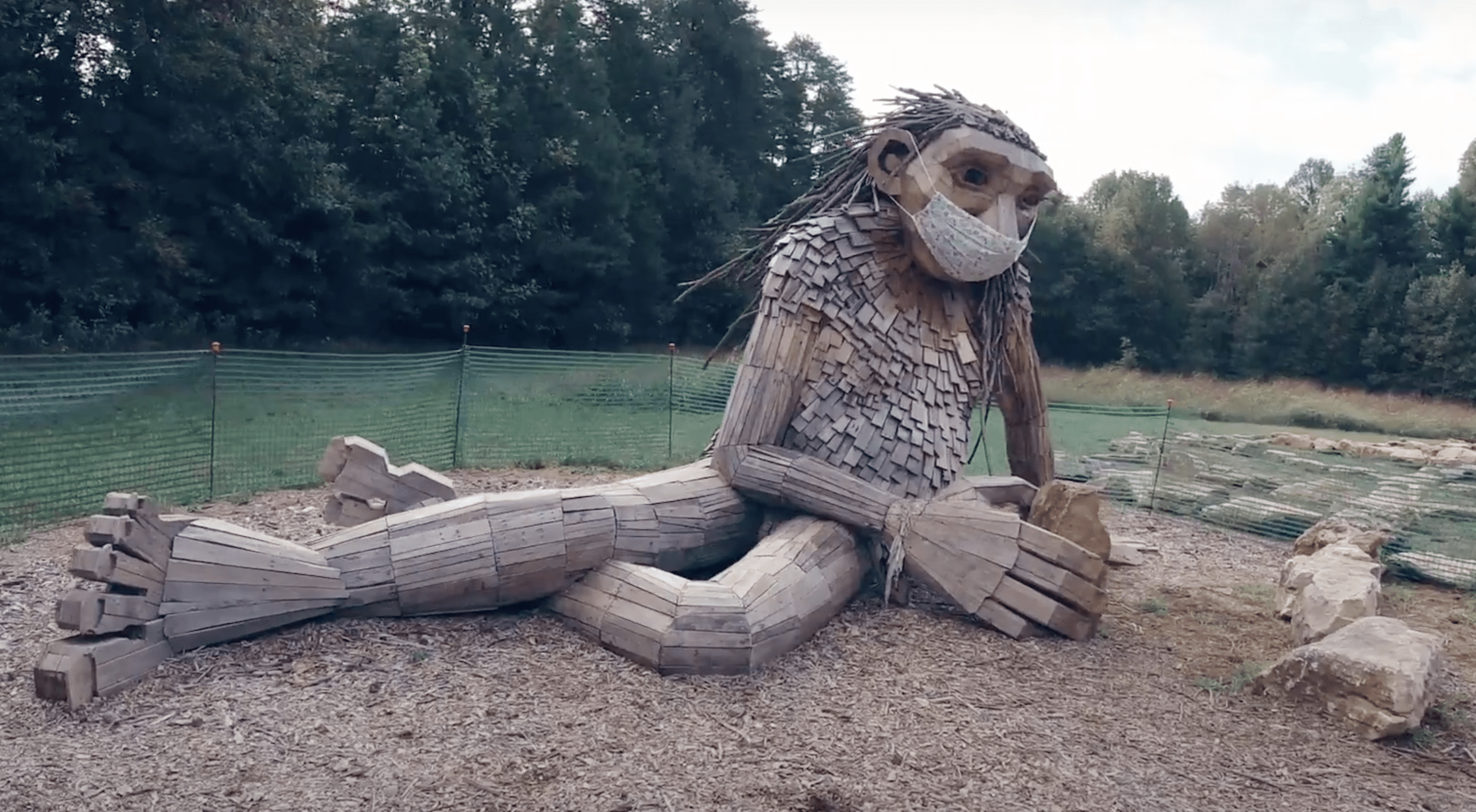 Hiking with Giants in Kentucky

Since y’all know that we like to walk and run like our lives depend on it, for this adventure, we decided to embark on our longest hike yet, listed at 13 miles, at a local park while we were in Kentucky. But first — as usual — there’s coffee. Since Daniel is addicted to the stuff, we had a bag of Sandhill Coffee in our Airstream. My lovely husband made his magical brew on the stovetop, and we were ready to start our day.

Getting the Airstream Party Started

We hit the road and soon enough, arrived at the Bernheim Arboretum and Research Forest. Not only is it a breathtaking place to go for a long hike, it’s also home to three wooden giants. So we get to connect with nature and use our imagination like when we were kids playing outside.

We checked the map to have an overview of the area we’d be hiking — the Millenium Trail. It’s supposed to take approximately six to seven hours to complete, with a midpoint turnaround for those who want to experience the trail’s beauty but not be sore for the next week.

Right at the beginning of the trail, we came across a fork in the road. Daniel decided to ignore the sign that said Trail and off we went. Lo and behold, we headed in the wrong direction. But it’s all good in a place with giants, isn’t it? And they are beautiful. They were sculpted by Danish artist, Thomas Dambo and brought to the park for its 90th anniversary. What makes them even cooler is that they’re made from recycled materials, including bourbon barrels, scraps, and fallen trees. They are also part of a fairytale written by Dambo, The Great Story of Little People & the Giant Trolls.

A Hike Started at the End

Even though we were delighted with Dambo’s trolls, we were very confused. After all, the trail map showed that the giants were supposed to be located at the end of the trail. Take note, wanders. Never ask us for directions. But hey, we eventually found our way. And soon enough, we came across a baby turtle, so we stopped to say hello.

There were so many things we loved about this adventure. The scenery was breathtaking, we came across several cute little animals, and — since we arrived first thing in the morning — we had the trail to ourselves.

We stopped at the halfway point to eat our snacks, then we carried on. At some point, we decided to seize the day and run the trails, which was all fun and games until we got lost. Just kidding. It was still fun even after we lost our way. After all, this wasn’t our first rodeo. Soon enough, we got back on the trail. And, since life is full of surprises, we came across a cemetery. Cue the horror film music.

Spoiler alert: We’re alive. And after we reached the half marathon point, Daniel decided it was the perfect time to run the rest of the way uphill. Did we come across any bears? Did we see any rattlesnakes? Did I do gymnastics when we finished? And, most importantly, did we see any additional giants?

Watch for yourself as we hike and cavort in a land of fairytales — and subscribe to our YouTube channel, Wanderlocal, so you don’t miss a single episode of this adventure!

Author Bio
Lauren Davenport is the CEO of healthcare communications firm, The Symphony Agency, providing technology and marketing solutions to help healthcare practices grow fast and efficiently. She’s been featured in Forbes and local magazines, showcasing her experiences as a small business owner. Daniel Fernandez is the Chief Experience Officer at the Symphony Agency and host of The Healthcare CEO podcast.