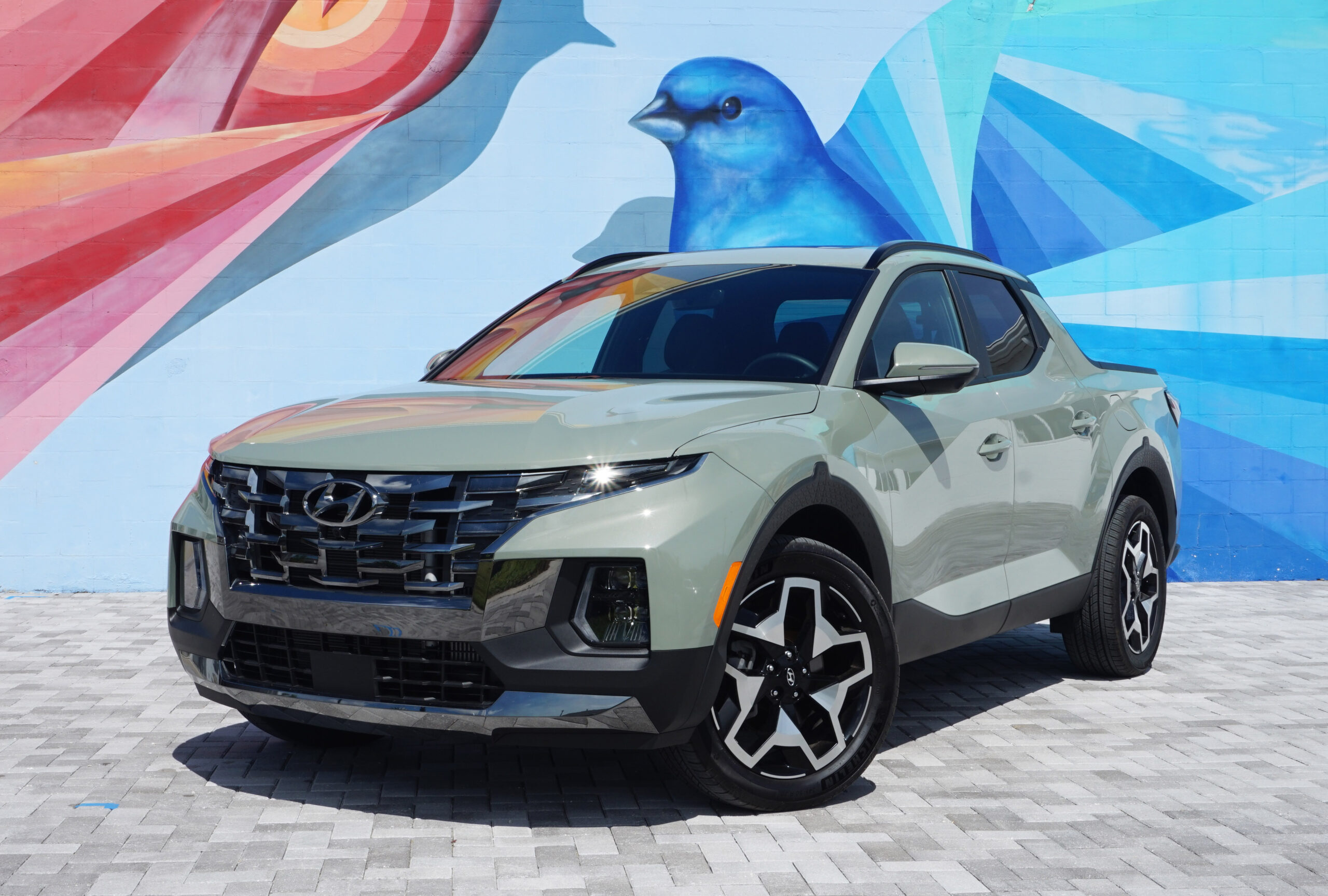 New Year’s resolution numero uno for 2022? Second only to losing 10 pounds: Get out and have more fun.

An easy way to do this is to jettison that oh-so-dull ride sitting in your driveway and trade it for something with a more adventurous spirit.

One of the coolest fun rides out there right now is the go-anywhere, throw-anything-in-the-back 2022 Hyundai Santa Cruz.

Don’t call it a pick-up; it’s a Sport Activity Vehicle. Yes, it does have a pick-up bed out back. But this isn’t for carrying mulch or sheets of drywall. It’s for throwing in kayaks for a trip to the Everglades. Or loading in a bunch of camping gear for a weekend at a state park.

And with a towing capacity of up to 5,000 pounds, it’ll pull a cool, off-road camping trailer, or a bunch of jet-skis, or a decent-sized fishing boat.

Want to take the road less traveled? This thing comes with all-wheel drive, almost nine inches of ground clearance, and tough plasticky bits along the lower sides that won’t get banged up.

No, it’s not a rugged Jeep Gladiator, or even a Honda Ridgeline. But then, it doesn’t cost the same. Prices for the Santa Cruz kick off at just $23,990 for the base SE model, though the version you’ll want is the super-nicely-equipped Limited at $41,000.

This comes powered by a punchy 2.5-liter turbocharged four-cylinder packing 281 horseys and coupled to an eight-speed dual-clutch automatic, and all-wheel drive.

Yes, it’s basically a stretched and re-styled version of Hyundai’s cute-ute Tucson mid-size SUV, but you wouldn’t know by looking at it.

I love the Rambo styling, with that swoopy roofline and angled rear roof pillars. Add to that, the beefy wheel arches covering very cool-looking 20-inch alloys, and a funky front grille with eight daytime LED running lights set inside.

Those roof rails can also clip onto the available cross-rails to carry a couple of paddle boards or mountain bikes.

And the bed is lined with tough black composite and has a multitude of D-rings to cinch down your cargo, a couple of sidewall storage compartments, and integrated bumper steps on each side for clambering in and out.

Its party-piece however, is the lockable, full-width storage compartment beneath the floor. It’s big enough to hold over 100 beverage cans, and a plug that lets the melted ice drain out. It’s also great for muddy hiking boots and soggy swimwear.

Inside, there’s a lot of Tucson SUV here, including the 10.25-inch digital instrument panel and similar-sized center stack infotainment and navigation display. Nicely trimmed seats, too, that are heated and ventilated up front.

Rear-seat legroom is on the tight side for adults, but the seat base flips up to reveal big storage bins. Pity that the rear seat doesn’t fold flat and open up to the rear bed to carry longer stuff, and that the rear window doesn’t lower for added versatility.

But out on the road, this new Santa Cruz is a blast to drive, with a surprising focus on comfort and refinement, especially in the way it rides.

That turbo four-cylinder has plenty of giddy-up to zip away from stoplights, and strong mid-range thrust for safe, fast passing. Cruising at 75 on I-75 is super-quiet, though under hard acceleration the motor can sound a little harsh and raspy.

But the combination of nicely weighted, precise steering, low body roll and plenty of tire grip, the Santa Cruz feels surprisingly agile and nimble through the curvy bits.

Maybe for the New Year, this new Santa Cruz is just what you need to get out and have fun. Let the adventures begin.