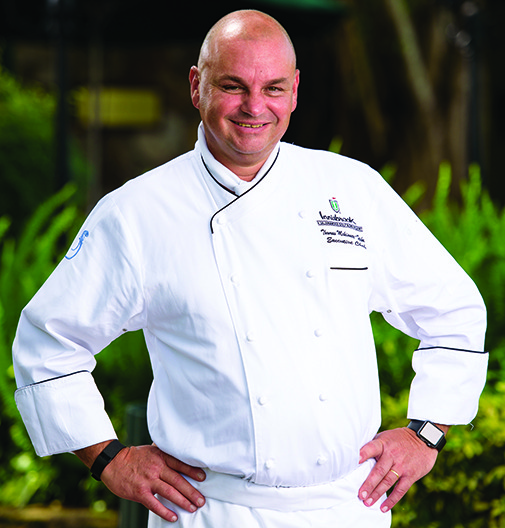 At age 11, Thomas McKinney-Stehr was convinced he had found his calling. The youngster eagerly spent after school hours at his family’s restaurant in Germany, working in the kitchen alongside his mother while his father kept the business’ books.

Today the 50-year-old chef still speaks passionately about a career that has enabled him to cultivate his cooking skills in casual to fine dining restaurants and upscale resorts to hotels while also enabling him to master multiple cuisines.

Despite his mother’s best efforts to steer him to what, she hoped, would be a less-demanding profession, he persevered and proved to her that, late nights and long hours notwithstanding, he was happiest creating delicious food in a commercial kitchen.

“She lined up an interview for me for a job building electric cable boxes but I knew that was not for me,” he recalled. “I would be so lost without my kitchen.”

As the current executive chef at Innisbrook Resort, McKinney-Stehr has come a long way from that family-owned cafe. Today he oversees four restaurants serving resort members, overnight guests and the general public, plus catering for the 900-acre, full-service resort’s weddings, banquets and corporate events held in three conference centers.

Drawing from his experience working in Europe, the Southeastern U.S. and the Lied Lodge & Conference Center in Nebraska, McKinney-Stehr describes his current culinary style as “East meets West featuring the freshest ingredients.”

“I came to America with a background in nouvelle cuisine and traditional German cooking. Here you also have Latin and Cuban influences. It’s about finding new ideas and introducing changes that work.”

After turning 15, the budding chef spent a three-year apprenticeship with a German master chef and briefly ran a restaurant with his father but declined to stay on after a change in ownership. The 20-year-old’s next venture was a small wine restaurant he basically ran by himself with some dishwashing help on weekends. While later working at a fine dining Italian restaurant in Germany, the young chef often accompanied the owner on summer vacations to Italy that allowed him to hone his craft in Italian kitchens.

When his then-girlfriend announced she was leaving Europe to return to Tampa, he decided the time was right to make his U.S. debut. It was 1997 when he literally took his marriage vows one day and landed in America the next.

Chef McKinney-Stehr wasted no time finding work in the kitchens of some of this area’s leading restaurants. His Central Florida/West Coast culinary odyssey took him to Donatello Italian Restaurant, Cafe Italia Ristorante, Armani’s, Oystercatchers, Jackson’s Bistro Bar and Sushi Restaurant, the Westin Harbour Island Hotel and the Four Diamond-rated Resort at Longboat Key Club before continuing his career in Charleston and, most recently, Nebraska.

Last year marked a homecoming of sorts when chef and his family returned to the Tampa Bay area after he was hired by Innisbrook.

Nine months into his new job his team is already garnering guest praise for elevating the way the food is prepared and how well it is plated. Among his recent menu additions are the seared salmon served with cranberry quinoa, carrot mousseline, parsnip chips and candied ginger yogurt and the red curry-stained Gulf grouper accompanied by coconut jasmine rice, crisp root vegetables, chilled, creamy cucumber sauce (courtesy of his grandmother’s recipe) and ancho oil.

“It’s a combination of service, presentation and amazing flavors. I really appreciate my team,” he added. “When I hire new chefs I look for heart. This is something I have loved since I was 11. It’s not just about what’s on paper. When you have to prepare food for 300 people, you have to have exceptional cooks in the kitchen.”

Salt and pepper  to taste

3. Make sure chicken stock is absorbed before adding more.

4. Make sure risotto is UNDERCOOKED! Season with salt and pepper.

1. Combine fumet, white wine and heavy cream. Bring mixture to a simmer. Add half of the base and flour slurry then strain.

1. In mixing bowl, combine jumbo lump crab, red onion, celery, and mayo. Do not over mix.