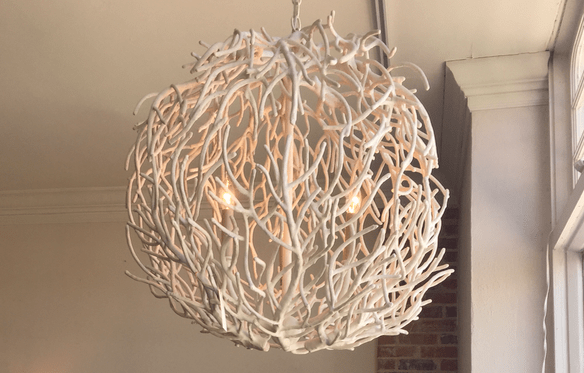 A coral chandelier lights up the room at Mis en Chic.
Home

Chandelier ideas from ornate to outrageous

Do a search for “chandelier” on the internet and you’ll dredge up multiple images of what is formally defined as “a branched ornamental light fixture designed to be mounted on ceilings or walls.” The range is broad, from Overstock’s “Warehouse of Tiffany Melly 3-Light Antique 16-Inch Crystal Chandelier, Bronze” ($135.99) to Houzz’s “66-Light Foyer Hallway Light, Chrome With Crystals”($132,561).

But you’ll also get the lyrics to Sia’s anguished anthem “Chandelier;” the video for the song starring Instagram starlet Maddie Ziegler; and the version performed by Puddles Pity Party, a singer who dresses like a clown but has a magnificent voice and wowed the judges on America’s Got Talent. And there you are, headed down an internet rabbit hole when all you wanted was something nice and bright to hang from your ceiling.

An aah-provoking oasis of cool sophistication in the city’s EDGE District, Mis en Chic is chock full of tasteful interior tableaux in shades of grey and beige. But do look up as well as around: owner Heidi Kiffin’s ceiling is a trove of lighting ideas, from ornate to outrageous to just plain beautiful.

You could say her collection begins with her shop’s logo. It’s an artist’s rendering of an antique chandelier Kiffin found in Paris, where she lived for eight years.

“I just try to find unique pieces that are not your typical ‘cookie cutter’ items that you see everywhere,” says Kiffin. “Or I just buy what I love!”

There’s much to love, including a chandelier dripping turquoise ($7,500) that looks like fingers of seaweed clinging to a treasure hauled from under the sea. Continuing the nautical theme, there’s also a cage of light made from real coral ($2,240) and two beautiful jellyfish-like fixtures with dangling silvery tentacles ($900 and $1,230). There’s traditional crystal, too ($2,400), a pert little feathered number that could do double duty as a hat ($3,238), and lots more.

Sia sang about wanting to hang from a chandelier. Visit Mis en Chic and you might feel inclined to do the same thing (or at least bring one home and hang it).

The Magic of Music City: Now's the time to visit Nashville