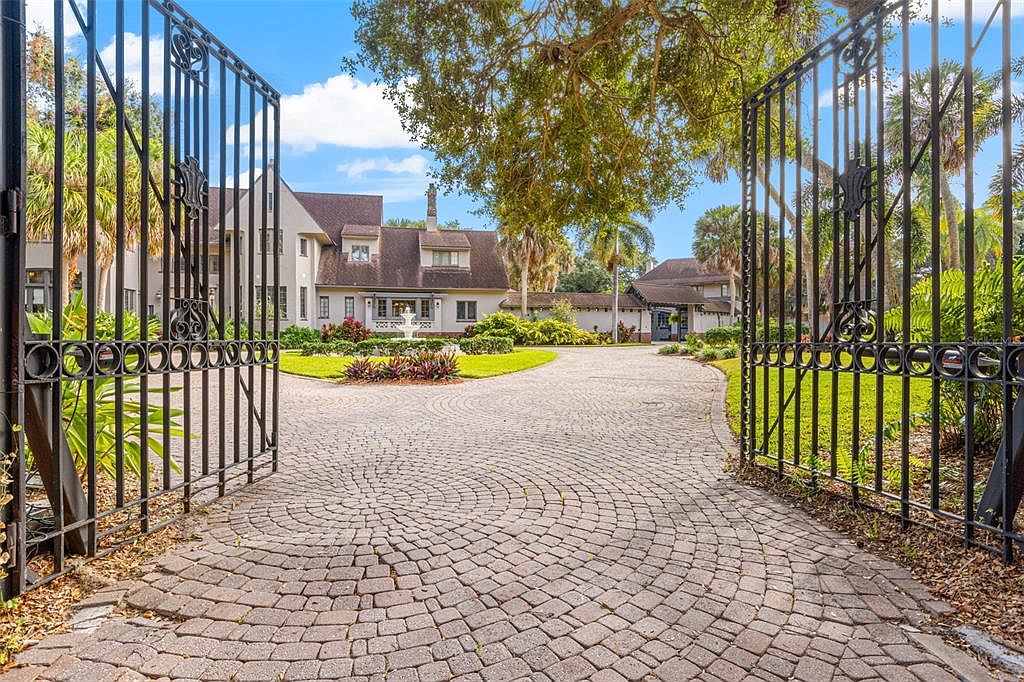 Could it be that a 10,000-square-foot waterfront mansion in south St. Pete gets overshadowed by two swaths of green grass? Um, yeah. The first thing you notice in an aerial view of the Rutland-Farley estate is just how vast the front and back yards are of the 4.4-acre property overlooking Little Bayou.

“It’s like living in a park with a waterfront view,” says listing agent Jac Smith of Keller Willams Realty.

Since going on the market in late 2019, developers looking to subdivide the property have made offers to owner Phil Farley, a real estate investor. He has turned them down, and is seeking to sell to someone who will preserve the 104-year-old home and the land it sits on.

The interior of the English Tudor mansion includes seven bedrooms, 11 bathrooms, six fireplaces, a library, a huge dining room, and 15 living rooms. That list doesn’t do justice to some of the remarkable design elements. “There’s a casual seating area next to kitchen with a brick ceiling,” enthuses Smith. “The library walls are covered in braided leather.”

The grounds include a large swimming pool, a bocce ball court and a putting green. Perhaps the most delightful feature is a wooden treehouse that flanks the pool. The structure has an enclosed first floor topped by an open-air deck — each offering splendid views of the Bayou and Tampa Bay beyond.

Farley bought the house in 2004, and raised his three children there. They’ve grown and gone off to college, according to a January 2020 story in the Tampa Bay Times. That’s one of the reasons Farley is selling.

The property has a colorful and occasionally checkered history. According to the Times story, the mansion was built in 1918 for an R.B. Worthington, who paid $50,000. He doubled his money two years later by selling to Pennsylvania oil magnate William C. Muir. The property changed hands a few times, and then Hubert Rutland, a prominent St. Pete businessman and banker, acquired it in 1935. The purchase included an additional 20 acres of surrounding land.

For five decades, the property was widely known as the Rutland Estate. It became a hub of lavish parties and fundraisers. The Rutland family sold the property in the 1980s after its patriarch died. Developer Robert Swain acquired it in the ’90s and sold off most of the adjoining land to developers.

In the late ’90s, the estate was owned by a Canadian con artist named Annette Martino, who was convicted of several healthcare scams. After that, a woman named Angela Sweet acquired the home and turned it into an unlicensed, faith-based school called the Excellence Academy. She ran it without the proper permits and racked up a slew of code violations. At one point, the water was shut off for nonpayment. The home was in disrepair and foreclosure.

That’s when Farley stepped in and paid $2.3 million for the property. He set about restoring the mansion to its former glory, which, as the photos show, he more than achieved.