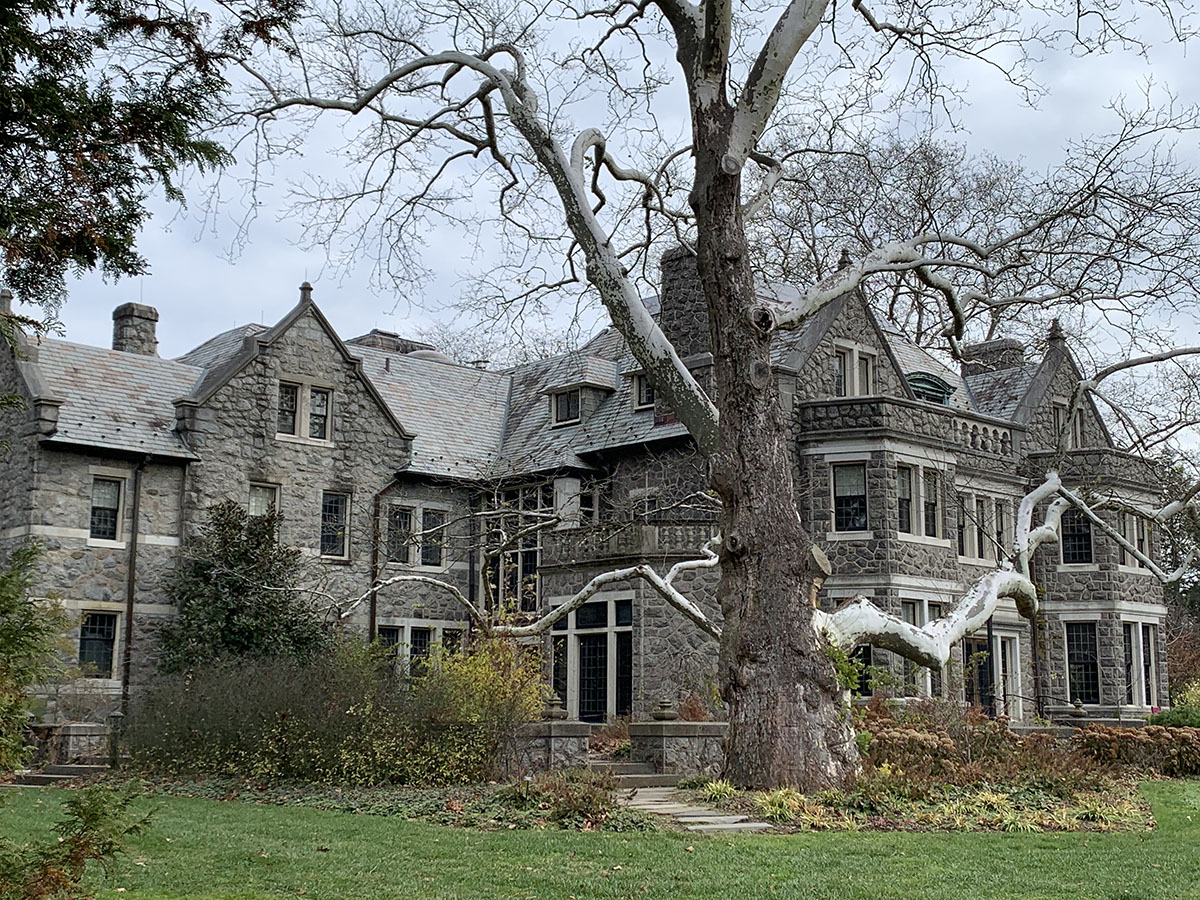 Mansion Monday: The happy fate of an estate on Philadelphia’s Main Line

How the Haas family gave Stoneleigh, their family home and gardens, to the world.

Usually in this column we focus on multi-million-dollar manses in the Tampa Bay area. But during my Thanksgiving travels I got the chance to visit a classic example of a mansion on the Main Line, the fabled Philadelphia suburb.

Many of the Main Line’s rambling estates have been subdivided or replaced by contemporary housing, but there are exceptions. Stoneleigh, a 42-acre property in Villanova, is among the most notable — not just for its beauty, but for the generosity of its former owners, John and Chara Haas.

John’s father, Otto Haas, co-founder of the Rohm and Haas chemical company, purchased the estate in 1932. The southwestern portion of a larger tract of land, its grounds had been transformed in prior years under the direction of the previous owner, gas company exec Samuel Bodine. Dissatisfied with the formal Beaux Arts style of the initial landscape designs he’d commissioned, he hired the prestigious Olmsted Brothers firm — sons of the famed landscape designer Frederick Law Olmsted — to transition the gardens to a more organic plan.

John and Chara acquired the property in 1964, and in 1996 decided to place it under conservation easement with Natural Lands, a non-profit that saves open space, cares for nature, and connects people to the outdoors in eastern Pennsylvania and southern New Jersey. They continued to live in the mansion till their deaths in 2011 and 2012, after which their children agreed to cede permanent ownership of Stoneleigh to Natural Lands, leaving it as a legacy to the public for generations to come.

The Haases’ dispensation of Stoneleigh is typical of a family known for its philanthropy. The family-run William Penn Foundation has awarded billions of dollars in support of education, the environment and the arts.

A four-square granite structure built in 1878 for a Pennsylvania Railroad VP as a summer and retirement home, it was modified over the years from its original Addams Family-esque Gothic look to “its present, mildly Elizabethan character” (The Main Line Country Houses 1870-1930, by William Morrison). The Main House is open to the public only for Natural Lands programs or pre-arranged group tours.

…to the north (below), complete with circular driveway.

Details like balconies and leaded windows are typical of the Tudor Revival style.

Natural Lands opened Stoneleigh: A Natural Garden in 2018 as “a showcase for blending the aesthetic beauty of designed gardens with the natural richness of native habitats.” Visitors can wander more than a mile of pathways, including flagstones, paved paths, step stones and grass. Admission is free.

The grounds are a testament to the value of biodiversity, with plants and trees as varied as phlox, cucumber magnolia, redbuds, mountain laurels, Eastern red cedars, American beech, white pines and the Dawn Redwood (below), to name just a few.

As explained on Natural Lands’ digital map, the Pergola (below) is an original design feature dating to the early 20th century reflecting the Beaux Arts period of garden design, which emphasized formal geometry, defined garden “rooms,” and symmetry. It was restored and enhanced in 2019, and a custom-designed contemporary bench is inscribed with a quote from the poet Mary Oliver.

In Catalpa Court, the digital map tells us, there’s “a chemical-free, cascading-edge water garden that uses plants for filtration, offering habitat for birds, amphibians, and other wildlife.”

And you mustn’t miss the bunny tree. Here’s Natural Lands’ explanation of this beloved landmark: “This playful carving depicts the Haas family members: two large rabbits — mom and dad — and five baby bunnies representing the five Haas children. (Haas is Dutch for ‘hare.’) Exposure to the elements eventually took a toll on the original sculpture, so Natural Lands hired the original artist to carve a replica. We continue the family’s tradition of dressing the hares for special occasions.”

If you happen to be in the Philadelphia area later this month, Stoneleigh’s holiday schedule includes wreath-making workshops using native evergreen boughs and a one-man adaptation of Charles Dickens’s A Christmas Carol in the mansion. Do check out the aforementioned Instagram account; it’s a visual record of all four seasons in Stoneleigh’s gardens (springtime looks particularly glorious), with pics of local fauna (foxes, frogs, snakes) as well as flora.