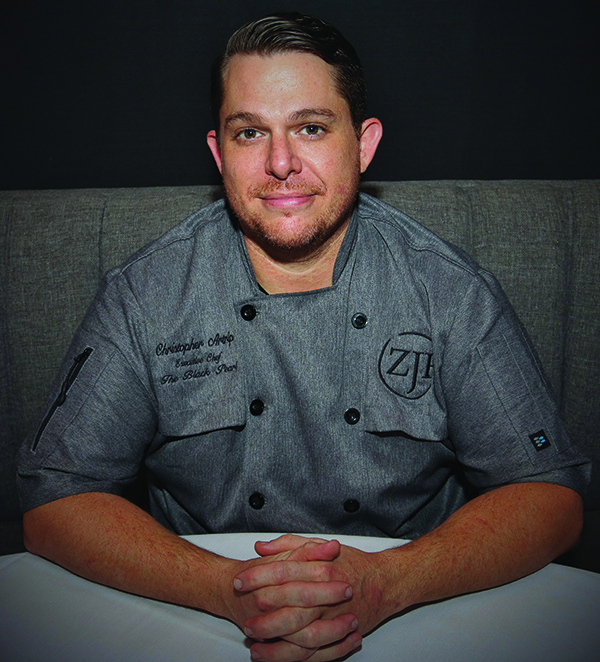 Chef Christopher Altrip is modest on how his flair for creating global culinary cuisine is changing palettes in Tampa Bay.

Altrip, who is as charismatic as he is passionate about food, is the creative force behind the award-winning restaurant, The Black Pearl. Located inside a 100-year-old building along Main Street in Dunedin, the restaurant is surrounded by an enclave of mom-and-pop shops and eateries. Tucked inside the walls is an intimate dining room – only 38 seats – but it’s the symphony of flavorful dishes coupled with a memorable dining experience that has made The Black Pearl a destination favorite for foodies.

Named executive chef almost two years ago, Altrip had made an impression with diners and the culinary community by pushing the boundaries and expectations in the kitchen. His inspiration shines in every dish, as he conceptualizes six new menu specials each week, offering an array of New American and French cuisine, with an expanding global palette featuring Italian, Moroccan and Indian flavors. One of his signature items, Sancocho, a chicken soup made with yucca, corn and root veggies, is a variation on his grandmother’s classic dish and honors his half-Panamanian heritage.

It’s that symphony of varying flavors and textures that Altrip has created in each dish that keeps customers coming back. Not one to follow the latest food trends, Altrip strives to create a culinary presentation nightly that appeals to all five senses, using high-end ingredients and locally sourced meats and produce. In fact, he boasts that he’s never repeated any dish in almost two years.

“I use what I can when conceptualizing the menu and make what I feel,” he says. “My cooking style has always been evolving, and I pick up details from the people I’ve worked with over the years.”

This soft-spoken food connoisseur admits he has always loved to cook, but never really considered it as a career until  his mid-20s. He fondly remembers learning to cook alongside his grandmother and experimenting with flavors and foods for friends, never following a recipe. He took a job as a prep cook at a local country club and advanced through the kitchen before perfecting his culinary skills. Altrip enrolled in a six-month intensive program in Vancouver, British Columbia, under the critical eyes of “six Gordon Ramsay’s,” he chuckles.

After graduation, Altrip returned to Tampa and was hired at the Zagat-rated Cafe Ponte in Clearwater. In 2006, a friend, who was the executive chef at The Black Pearl at the time, pursued Altrip to join him as a sous chef. Working at both restaurants turned out to be a fortuitous turning point in Altrip’s career, both personally and professionally.

When Altrip decided to work at The Black Pearl full-time, Kathy Laroche, the restaurant’s original owner, became one of his most influential mentors.

“She was hard on me when I first started,” he recalled. “She made me taste everything we put out, and it’s something that I still do today.”

Altrip is modest talking about his success in the kitchen, and gives much of the credit to the servers for their knowledge of the food to manage guests’ expectations.

He’s always creating something new and continues to make a profound statement on Tampa’s dining community through annual events such as the chef’s dinner and Spring Farm to Table event. Recognized as one of the top 10 restaurants in Tampa Bay, and placing tops in the French category by the Tampa Bay Times, Altrip says winning the James Beard Foundation Award would be the ultimate achievement in his culinary career.

“In many ways, I have the creative freedom to do what I want. I’m constantly pushing and creating new dishes.”l

1 pound of cubed corvina or other mild white fish

3 lemons (all juiced but zest from only one lemon)

Salt and pepper to taste

Combine all ingredients in a bowl. Cover with plastic wrap and let marinate in the refrigerator for at least 5 hours stirring every hour or marinate overnight. Check seasoning once marinating is done and add salt and pepper to taste. Serve in a chilled bowl with crackers or crostini.

A Slam Pit Hit – Discover UNION72 in The Shops at Wiregrass