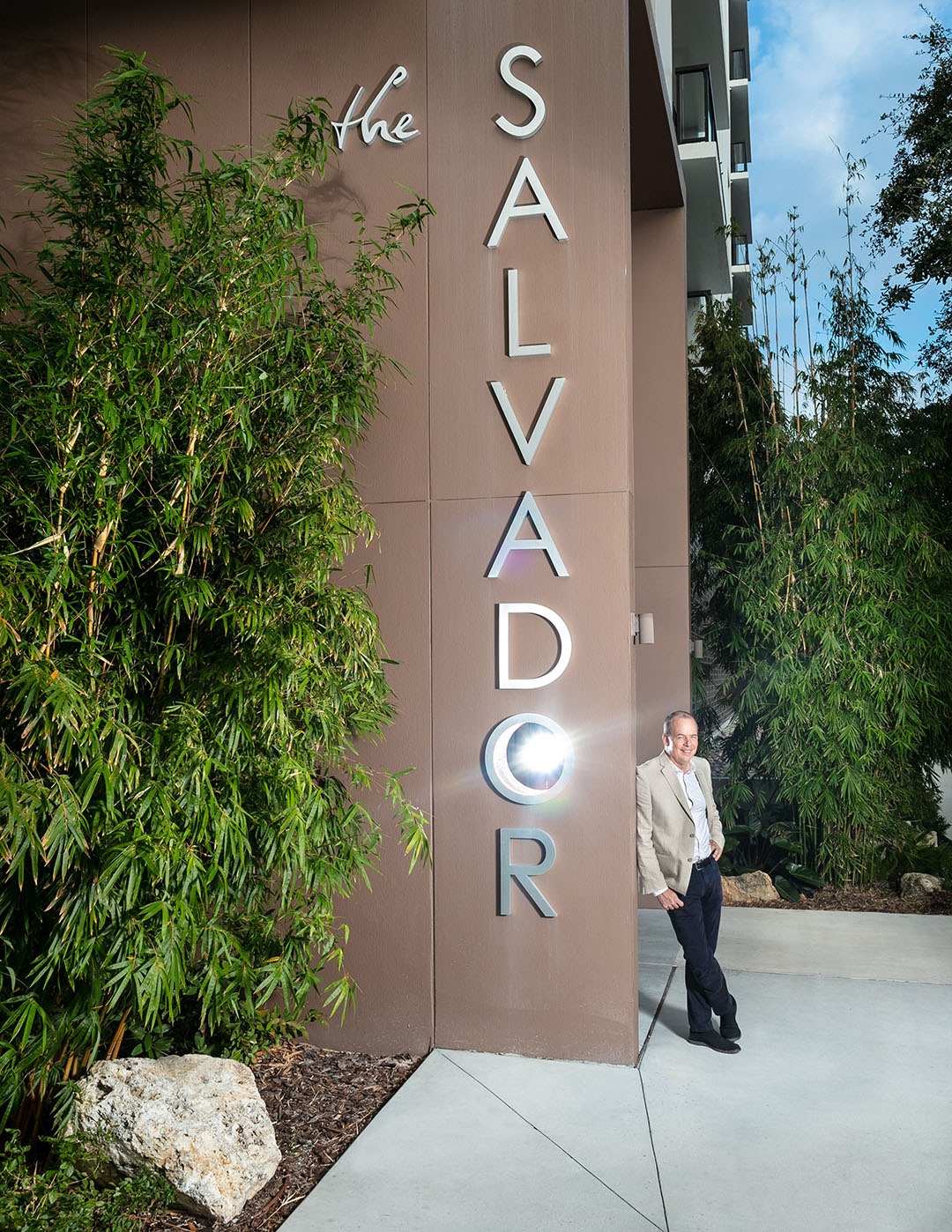 For this special dR Tampa Bay series, “Real Estate, Real Lives,” we’re profiling six people who work in five disciplines essential to the industry. Hard-working and visionary, thick-skinned and sensitive, they serve their clients above all. And each has a deep and abiding connection with Tampa Bay.

Three decades ago, he envisioned downtown St. Pete as a thriving urban center, and has done all he could to make it happen.

Peddling his bicycle along the streets of downtown St. Petersburg, clad in snug black jeans, a rumpled white button-down and beige sport jacket, Tim Clemmons is the model of contemporary urbanism.

Most days are bike days. His 2014 Ford Fusion hybrid is parked by his townhome a few blocks north. It’s a four-unit place near Sundial that he and three friends developed on a 50-by-100-foot lot and moved into 21 years ago. At the time, it was downtown’s first new residential building since 1981.

That project was the first significant pillar in the 59-year-old architect’s over-arching professional mission.

“When I was around 30, I thought about what I wanted my career goal to be, and that was to make downtown St. Petersburg a thriving, vibrant, urban place — more so than, say, me designing 10 individual masterpiece buildings,” Tim muses. “I never styled myself as one of these architects who is purely, naturally gifted, but I thought I could help take these two square miles to the next level.”

So the next time you’re inclined to pinch yourself about what downtown St. Pete has become, know that Tim Clemmons played no small role.

His firm, Place Architecture, specializes in multi-family residential. Tim’s projects include the Bliss tower, The Salvador, 475 Condominium, and the Morean Arts Center. Ten years ago, he began designing major renovations for affordable-housing high-rises that were built in the ’70s, mostly occupied by seniors. That led to designing new buildings like Campbell Landings and The Graham.

Over time, his reach has spread to nearby cities, where his firm designed Tampa’s Armature Works, a popular mixed-use development. His current marquee project, due to break ground soon, is The Sanctuary, a 17-story luxury condo building on Bayshore Boulevard in Tampa.

But it hasn’t just been the stuff he’s helped build. It’s also projects he helped prevent. Tim and a group of other activists fought against Bay Plaza, a 1980s master plan bent on turning a fair portion of downtown into what he calls a “big, homogenous mall.” After demolishing a few historic buildings, including the Soreno Hotel in ’92, Bay Plaza withered away. Urban disaster averted, in Tim’s view.

“We like to think we deserve the credit,” Tim says with a grin, “We did slow the project down. But it was mostly the economy.”

Tim spent his early life in rural Tennessee, near the Alabama border. His father, a U.S. Air Force sergeant, moved the family to Eglin Air Force Base in the Florida Panhandle when Tim was 11. He’d had no exposure to architecture, but in the fifth grade realized he was good at drawing and math. “Someone said, ‘You should be an architect,’ and, without really knowing what it was, I started saying that’s what I was going to be,” Tim recalls. The notion stuck.

He did his architecture studies — undergrad and post-grad — at the University of Florida. Tim first visited downtown St. Petersburg on a Sunday in 1982, while a grad student at UF. He didn’t see “God’s waiting room,” but rather a beautiful waterfront and “good bones.”

“I had a favorable first impression,” he remembers of downtown, “but I didn’t see a single person.”

The newly minted architect moved to Tampa and took a job with the firm Rowe Holmes. He relocated to St. Pete in ’84. A couple of years later, Tim and his new wife scraped together $2,500 and moved to San Francisco. He fell under the thrall of urban living, but his West Coast odyssey lasted only a year and a half. When his wife got pregnant, she wanted to return home to St. Pete to be near family.

The couple divorced two years later. Tim considered returning to that other Bay area, but ultimately decided to stay in St. Pete to be near his daughter, Alexa — and to apply his passion for urbanism. He lives in his 1,550-square foot condo with his second wife, Robin, whom he married this year.

Tim feels that his early-career activism, at times controversial, has served him well. “Most architects are timid when it comes to discussions about their cities for fear of offending people who could be potential clients,” he says. “I made some enemies, but made more friends, and I think I’ve gotten more business by being outspoken than by keeping my mouth shut.”

While Tim feels generally good about downtown St. Pete these days, he offers a note of caution. “The big developers are aware of us now and with that comes an influx of money,” he explains. “They’re not doing bad projects, but they are doing fewer and fewer, bigger and bigger projects. I like to see 10, 20 buildings per block instead of one building per block.

“So you got to be careful what you wish for. You just might get it.”

Click the links for other profiles in the “Real Estate, Real Lives” series: