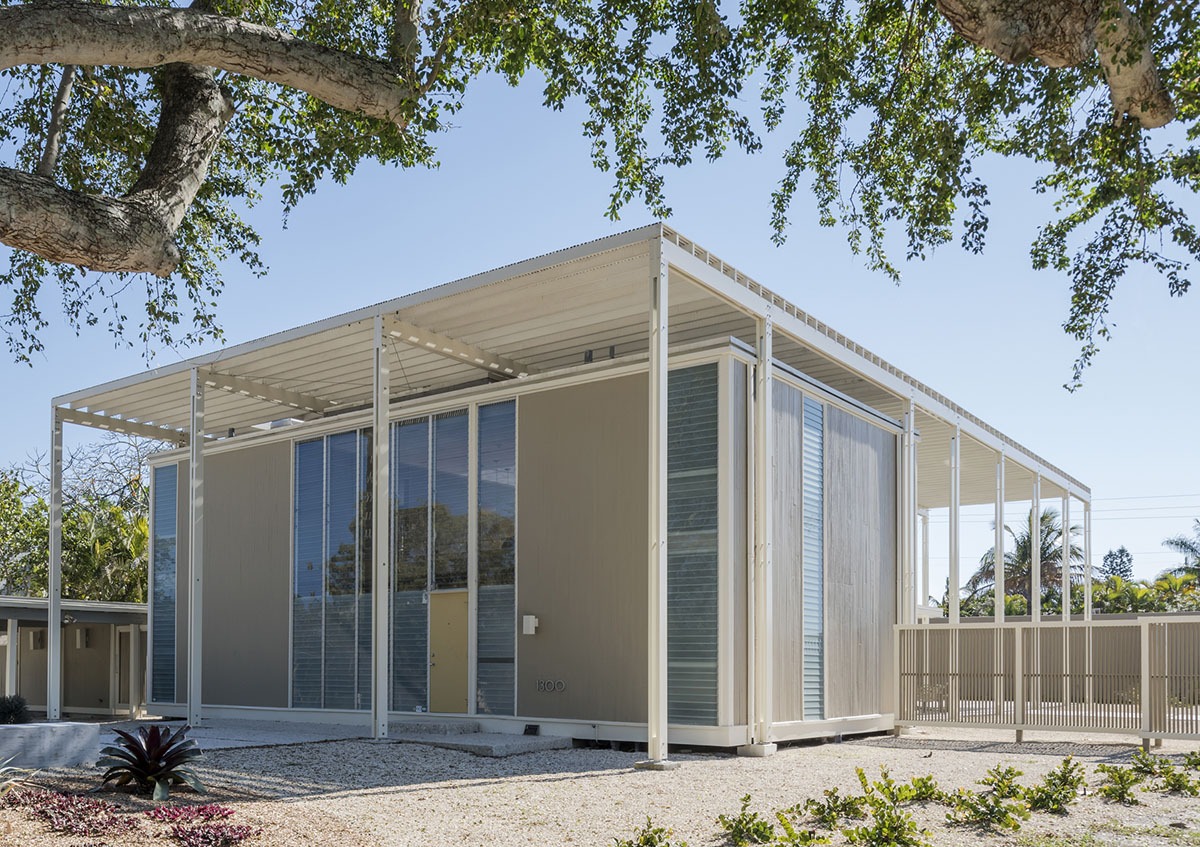 Sarasota: Why it’s a must for architecture buffs

Discover ground-breaking mid-century homes from the Sarasota School of Architecture — and the stunning new boutique hotel the movement inspired.

On the third Saturday of each month, architecture buffs vie for one of the few slots to tour Sarasota’s most recognizable residence, Paul Rudolph’s 1953 Umbrella House, built as a model home in the Lido Shores neighborhood.

Not far from here, John and Mable Ringling’s Venetian Gothic-style mansion Ca’ d’Zan and Marie Selby’s jewel-box botanical gardens — both bayfront parcels gifted to the community by their owners — have long been must-visits on the Sarasota circuit for those seeking more than sun and sand on some of the nation’s best beaches. Now, a renaissance of Sarasota’s Mid-Century Modern architecture, collectively referred to as the Sarasota School of Architecture (SSA) movement, is inspiring the next generation with design-forward hotels, an expanding downtown footprint and a desire to learn from the past to create the future.

To be clear, there is not and never was an actual school. The SSA refers to modern architecture developed for the Florida climate from 1945-1975, says Dr. Christopher Wilson, architecture and design historian at Ringling College and chairman of the Sarasota Architectural Foundation (SAF), whose efforts are putting Sarasota on the map for design enthusiasts. SAF gives tours of the privately owned, museum-quality Umbrella and Cocoon houses as part of its mission “to educate about, advocate for and celebrate the SSA.” (See “Plan Your Trip” below for info on upcoming tours.)

The ideal homebase for exploring the city’s architectural highlights is the recently opened Sarasota Modern, an 89- room boutique hotel in downtown’s emerging Rosemary District. (Without traffic, it takes a maximum of 10 minutes to drive to any of the sites mentioned in this story.) Boston-based architect Stephen Chung collaborated with Sarasota-based Hoyt Architects, who brought a working knowledge of the SSA movement to the project.

That doesn’t mean you’re getting an Epcot version of a Sarasota School hotel, says owner-developer Jason Cincotta. “They didn’t have insulation practices,” he says, “or air-conditioning,” referring to the mid-century period in which the design movement is attributed. “We had to bring that ethos of the Sarasota School and adapt it to today’s building systems as well as our desire to use materials that will stand the test of time.” While Cincotta is envisioning his hotel in the future, he is definitely keeping one foot anchored in the past.

For instance, the entrance to the Sarasota Modern evokes that of the Umbrella House, not in style but intention. “A typical thing Frank Lloyd Wright did, and many architects do, is compress the entry, and then you step into the double-height space,” Wilson explains after stepping through the Umbrella House’s plain mustard-colored door atop a single coquina step. Something similar happens at the Sarasota Modern.

Unadorned double glass doors off the public sidewalk lead into a low-ceilinged, curved, board-form concrete vestibule that funnels you into a high-ceilinged, light- and plant-filled foyer — a space that is itself a contrast of light and dark, neutrals and colors, indoor and outdoor elements that when combined, make you feel entirely transported. It is a potent use of design to signal that your vacation has begun, even if you’re only staying for dinner. Its restaurant, Rudolph’s, pays homage to the co-founder of the Sarasota School not just in name. Chef Jennifer Salhoff and her team, who are recognized on the cover of the menu as the architects of your culinary experience, are making good on the promise of a modern take on food by delivering the unexpected, such as wild boar shank or blueberry goat cheese gelato, on the frequently revised menu.

From the Sarasota Modern, it’s easy to explore. Start with coffee and avocado toast at the Overton, just a short walk up the Boulevard of the Arts at the center of a new complex, Rosemary Square, built as a hub for Sarasota’s culinary and performing arts. The Overton itself is an example of a modern approach to exposing the beauty of building materials rather than concealing them. Copper piping provides a steady drip for the cold brew coffee, the texture of concrete block walls feels warm, steel framing and air ducts painted white provide a geometric counterbalance to the light-filled space that seamlessly merges with the gracious courtyard. “It’s a very important gesture for a developer to give to the public,” notes its architect, Jonathan Parks of Rosemary Square developer Dr. Mark Kauffman.

A 10-minute walk away on Main Street is A Parker’s Books, a rare bookseller that has served downtown Sarasota for nearly 40 years and is a favorite of New York and Sarasota-based interior designer Ellen Hanson for finding volumes on design, cooking, history and more. Hanson’s own Pansy Bayou Design Studio is a short walk beyond, on Dolphin.

Visit her showroom for choice vintage finds mixed with furnishings, fabric, lighting and accessories by young American makers. Of note, Hanson exclusively carries Sarasota-based textile designer Charlotte Osterman’s fabrics for their bold screen-printed graphics in craveable and unexpected color stories. “We are totally committed to her and her Gulf-coast mission,” says Hanson.

You can see Hanson’s and Osterman’s work in the reimagined 1950s interior of the Cocoon House, another project of the SAF, which last year was able to lease and then restore Paul Rudolph and Ralph Twitchell’s 1950 Healy Guest House, sited directly on Siesta Key’s Bayou Louise. “You feel this profound connection to nature, water and the sky, which is extraordinary on the Gulf Coast of Florida,” says Hanson.

When Rudolph and Twitchell built this 770-square-foot guest house, “Sarasota was at the edge of the world,” says Parks (of Rosemary Square) who is also on rotation to give SAF tours. “It was a harsh environment with no air-conditioning and lots of bugs.” The Cocoon House was nicknamed for the plastic sealant Rudolph had encountered at the Brooklyn Navy Yard which he experimented with by using it on the hammock-shaped catenary roof.

Parks is a leading restorer of Rudolph’s structures. “When I moved to Sarasota fulltime in 1997,” he says, “I’d meet clients who didn’t even know they lived in a Paul Rudolph house.” Today, collectors buy significant SSA houses as others purchase art. That’s a win for the architectural foundation.

In 2014, SAF launched Sarasota MOD, an annual November weekend packed with tours, films and conversations about the Mid-Century Modern architecture that has done so much to shape the Sarasota of today. This year’s MOD will focus on the 1960s, but you don’t have to wait till then to explore Sarasota’s rich architectural heritage.

Stay at The Sarasota Modern. Its fifth-floor king balcony suites are soothing cocoons of comfort overlooking the courtyard pool deck. Enjoy live music in the restaurant Thursdays through Saturdays. thesarasotamodern.com.

Become a Sarasota Architectural Foundation member. Members get advance email notices for ongoing tours, films and lectures that celebrate the Sarasota School of Architecture. Check the SAF website for info on tour schedules for the Cocoon House and the Umbrella House. Download SAF’s new app, SarasotaMOD Tour, for access to its entire “Tour Sarasota” architectural guide.

Allocate at least half a day to visit the Ringling Museum. The museum is a three-ring extravaganza that ties together John Ringling’s legacy and includes the Circus Museum (don’t miss the exquisite miniature “day in the life” circus exhibit); the Ringling Museum of Art and its grounds; and John and Mable’s 36,000 square-foot Ca’ d’Zan. Dine on the patio at Muse, whose star is the burrata caprese served on a slab of Himalayan salt. ringling.org.

Don’t miss Gauguin: Voyage to Paradise at Marie Selby Botanical Gardens. Each year, the Selby mounts a transformative exhibit inspired by an artist, and this year’s focus on the great Paul Gaugin is a must, his Tahitian pastorals a perfect fit with the floral exotica of the gardens. The show runs through June 30; “Gauguin Nights” is a series of five after-hours events (one per month) featuring opera, ballet, theater, music and more. selby.org.