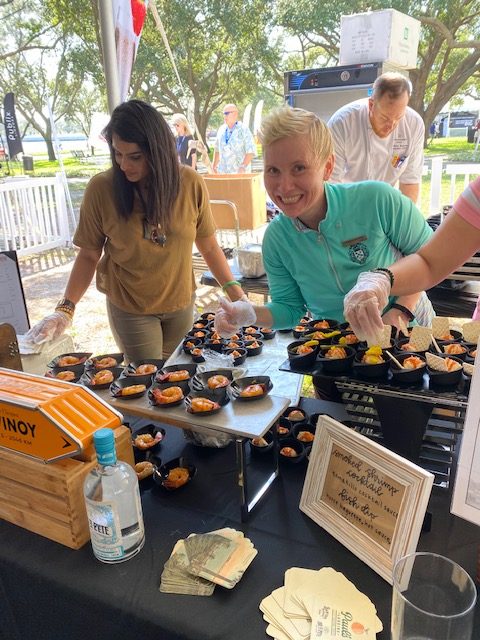 Savor St. Pete, a two-day food and wine extravaganza, made its debut along the waterfront at North Straub Park on November 2 and 3 to the delight of thousands of foodies and oenophiles (including myself).

The presentations of Birch & Vine’s Chef Lee and The Library’s Chef Rachel were my favorites. Chef Lee’s dish was a show-stopper: a Bone Marrow Parfait that was as amazing as it sounded.

Chef Rachel’s dish told a story: “A Journey of Her Career on a Plate,” which started with working for Bern’s Steak House. There was a grilled oyster in a shell and a bowl of spicy nduja tomato gnocchi, accompanied by a small bowl of bourbon espresso pot de crème.

The winner? Chef Rachel, the only woman in the competition.

After the chefs’ battle, I wandered through the large tented area, where wine distributors, breweries and delectable food samplings awaited.

I was happy to discover that the chefs I had seen at the competition had tables set up with samples of their food to try and enjoy. Red Mesa offered a scrumptious dish of citrus poached scallops and shrimp with a burst of heat at the finish, thanks to Serrano pepper and roasted corn cilantro.

Paul’s Landing, which is located at the Vinoy Hotel, served up yummy smoked grouper spread with a baguette, and a chilled smoked shrimp citrus cocktail that was delicious.

Chef Lee and Chef Rachel had samplings available and were representing their restaurants. They were very approachable and willing to talk about food and their culinary journey.

For the rest of the afternoon I explored the various wines, breweries and national food brands handing out samples and available at Publix for purchase.

Two of my favorite wineries were Josh and Justin. The Josh cabernet is already go-to wine for me, but here I had an opportunity to try their Prosecco, which was a great sparkling wine to sip, while their Chardonnay was creamy and light.  (Savor St. Pete.)

I hadn’t tried Justin’s wines before and was impressed with their Cabernet and enjoyed their Chardonnay. But was especially intrigued by their JNSQ Rose Cru, which was developed by Justin Winery owner Lynda Resnick for women wine lovers. Sold in a lovely bottle reminiscent of a perfume bottle, itt tasted very crisp and not too sweet, with touches of strawberry and cherry.

I especially enjoyed strolling along the waterfront between the two tents and the VIP Spirits Lounge, which featured premium spirits from Bacardi, Tito’s Vodka and Casamigos, as well as taking in the two campers set up on the grass between the tents, one from Stella Rose Wines and the other from Stella Artois. (Savor St. Pete.)

The biggest surprise was when it was announced that Tammy Gail, the founder of the event, would be having a pop-up wedding to fiancé Jeff Wernli on the stage at the Grand Tasting Tent. The ceremony was performed by Martha Davis, singer/songwriter of The Motels, and the very festive cake was created by the Culinary Institute of Tampa.

It was a wonderful day, and I look forward to seeing how Tammy builds from this event for next year. I will definitely be attending again.